International development experts say the federal government must boost its foreign-aid spending toward the UN target if it wants its feminist agenda to have a meaningful and sustained impact.

The government unveiled its feminist international assistance policy in 2017 as a cornerstone of its foreign agenda. The policy, which focuses on improving the lives of women and girls around the world, came at a critical time for the sexual- and reproductive-health and rights sector. In January of that year, President Donald Trump reinstated the global gag order prohibiting U.S. government financial support for international organizations that provide abortions or give abortion advice, leaving a US$600-million global funding gap.

Prime Minister Justin Trudeau announced plans last year to gradually increase international funding for women and girls’ health and rights to $1.4-billion annually by 2023, up from the $1.1-billion the government currently spends. The money will mostly come from the international assistance budget, which the government promised to increase by $2-billion between 2018 and 2023.

However, the annual budget increases have not resulted in a significant boost in development spending as a percentage of Canada’s gross national income (GNI). Canada reached 0.28 per cent in 2018, up from 0.26 in the two previous years, according to the most recent statistics from the Organization for Economic Co-operation and Development. But the government doesn’t appear to have a plan to reach the UN target of 0.7 per cent.

The international development sector says that while the policy shift is ambitious, the government must increase foreign-aid spending as a percentage of GNI in order to ensure the feminist agenda does not affect spending on Canada’s other development priorities.

“I’m concerned about ensuring that other aspects of ODA [official development assistance] aren’t taken from in order to fund ... the focus on women and children’s health,” said Sandeep Prasad, executive director of Action Canada for Sexual Health and Rights.

The sector is in the midst of coming up with a funding target, as the government prepares to table the federal budget this spring. Diana Sarosi, Oxfam’s acting director of policy and campaigns, said the proposal will likely involve a multiyear plan to at least double foreign aid as a percentage of GNI.

Global Affairs Canada did not say if there are plans to increase development assistance as a percentage of GNI, but a spokeswoman pointed to the government’s 2018-2023 budget commitment. In an e-mail, Katherine Cyr said the “announcement represented the largest increase to Canadian international assistance since 2002.”

The NDP has long urged the government to boost foreign-aid spending, with Leader Jagmeet Singh campaigning in the 2019 federal election on a plan to reach the UN target if elected.

Heather McPherson, the party’s international development critic and former executive director of the Alberta Council for Global Co-operation, participated in the consultation process for Ottawa’s feminist international assistance policy before she was elected last year. She applauded the government for developing a “remarkable” policy but said it has turned into “typical Liberal words and no action.”

“It’s an awful lot of Peter and Paul. We are taking money from other projects for these funds,” she said.

Experts wonder whether the NDP could pressure the government into increasing foreign-aid spending in exchange for supporting their minority in Parliament. In 2005, the NDP reached an agreement with then-prime minister Paul Martin to support his minority government’s budget in exchange for a $4.6-billion boost in social-program spending, including $500-million in foreign aid to bring Canada in line with the UN target. The Martin government failed to reach the UN target before it was defeated by the Conservatives in 2006.

Ms. McPherson said talks around foreign aid are “in play” for the NDP, but the development sector is concerned the party will prioritize other matters.

“I think there are bigger priorities for them – for example pharmacare, climate change – that I don’t know if they will necessarily use the ODA bucket as a stick in their negotiations,” Ms. Sarosi said.

Stephen Brown, a political science professor at the University of Ottawa who studies foreign aid, questions just how groundbreaking the feminist policy really is. He says that aside from the decision to fund safe abortion services, the government’s agenda looks similar to the former, Conservative government’s policy.

“So much of what Canada is doing now is a repackaging and a rebranding of what Canada has been doing before and sometimes all along,” Prof. Brown said. “It’s selling the Liberal brand as being feminist.”

Mike Lake, the Tory international development critic, said the Harper government laid the groundwork for Canada’s current development priorities by launching the Muskoka Initiative on Maternal, Newborn and Child Health in 2010, a US$7.3-billion international funding effort, and investing another $3.5-billion in the sector in 2014. It refused to fund abortion services, though.

The government’s feminist international assistance policy is still in its early stages, so it will take years to see the full effect of the policy shift.

However, some projects are showing early results. The Globe and Mail recently visited an $18-million project in Mozambique, where Canadian funding has trained four doctors at the Manica District Hospital to provide safe medical abortions. The hospital now provides an average of six or seven procedures a month and has seen a decline in cases of complications from abortions. 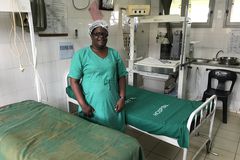 Canada a leader, but more must be done for women and girls in conflict zones: UN official
February 24, 2019