Former Research in Motion Ltd. co-CEO Jim Balsillie says Canada must “utterly reform” how this country retains intellectual property generated by publicly funded research in the wake of a Globe and Mail investigation of how Canadian universities and public money are helping China become a global telecom superpower.

The Globe and Mail reported Saturday that Chinese corporate giant Huawei Technologies has established a vast network of relationships with Canadian universities to create a steady pipeline of intellectual property that will aid its development of next-generation mobile technology. Canadian university professors have transferred full rights to their inventions to Huawei in 40 instances.

“Our publicly funded university and granting agencies are failing to generate and retain intellectual property for the benefit of Canada’s economy,” Mr. Balsillie said in an interview.

Mr. Balsillie is one of Canada’s most vocal and persistent advocates for government to step up efforts to equip Canadians with the tools necessary to operate in a global economy increasingly shaped by patented technological advances.

He said intellectual property is being transferred away even though Canadians will require it to create more private and public wealth that will fund future research at Canadian universities – where much of the infrastructure and staff is underwritten by billions of public dollars.

“What’s needed is an honest conversation to unpack the root of this failure so that the hundreds of billions of taxpayer dollars can begin yielding innovation outcomes for Canada,” he said.

“Canada should have a strategy that governs these kinds of relations so there is a structural benefit to the national economy. That will guide the response to the Huawei situation and other foreign companies feasting [on] publicly funded Canadian intellectual property.”

National security experts are troubled that Canadian institutions are willingly advancing the economic and geopolitical interests of Huawei, a firm regarded as a corporate arm of the Chinese state. Huawei has spent about a quarter of its $600-million research and development budget for 5G in Canada – and almost nothing in the United States, where it is viewed as a security concern.

China has rules that you can’t transfer IP out of the country. They have rules and a strategy. What’s our strategy?

In the House of Commons on Monday, Conservative deputy public safety critic Glen Motz called on the Trudeau government to launch a full review of Huawei’s activities in Canada, saying that “Canadian and American intelligence and security officials continue to warn that [the firm] is a significant cybersecurity risk because of its connections with Communist China.”

Innovation Minister Navdeep Bains did not respond to this request but said he believes the Liberal government is “playing a leadership role when it comes to our national interests.”

Mr. Balsillie said the Chinese government is not as generous as Canada when it comes to taking intellectual property (IP) out of China. “China has rules that you can’t transfer IP out of the country. They have rules and a strategy. What’s our strategy?“

Huawei spokesman Scott Bradley said in an e-mailed statement that “Huawei is not being given any specific advantage in Canada” and that it operates “in a highly competitive 5G research environment.”

Mr. Bradley noted countries around the world “constantly lobby the major anchor players to locate research operations in their countries” and that federal and provincial governments have provided supports to all three major players in the 5G space, including Sweden’s Ericsson, which recently received more than $100-million in federal and provincial support for its ENQOR 5G research initiative.

Mr. Bradley said most countries including Canada “do not have the size and scale to dictate their own approach on technology … for countries like Canada, the U.K. and Germany, it’s a careful balance … but having Huawei compete with Ericsson and Nokia in Canada in research and business has paid huge dividends” for Canadians.

But most of those offices were “chronically underfunded” and universities didn’t put enough emphasis on their output, Ottawa patent prosecutor Natalie Raffoul said.

In turn, said Luc Lalande, a director with Carleton University’s technology transfer office from 1996 to 2011, universities were “ill-equipped” to legally pursue those who infringed on their patents because of the volume and cost involved.

By the late 2000s, Mr. Lalande said, after the anticipated windfall from patented university research “didn’t quite materialize the way [granting bodies and] other policy folk anticipated,” Ottawa abandoned that drive. Industry groups pushed instead for companies to work directly with academics based on the premise universities lacked the skills to successfully commercialize their ideas, which led to the kinds of broad research agreements Huawei has struck.

Those deals have suited universities, as they view the primary role of their on-campus research is “to ensure that it gets applied and that it benefits society,” said Vivek Goel, vice-president of research and innovation with University of Toronto. In addition, industry partners have the resources to advance early academic research into more valuable intellectual property, he said. With U of T among those universities who retain ownership of their patents, “the value that will come back to us will be as these products get developed,” he said.

However, he said, foreign companies are the likeliest to undertake those relationships with universities here. “We don’t have companies of that scale operating in Canada and able to do that kind of work,” Mr. Goel said.

McGill University law professor Richard Gold warned universities “need to be careful about sponsored research contracts” that several, including Carleton University, have signed with Huawei where institutions give up rights to their research in exchange for money. While they pay for university resources, “the advantages are too often skewed to the firm, especially when they are foreign,” Mr. Gold said. 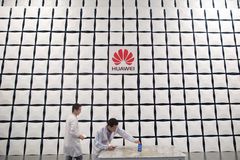 Follow Steven Chase, Sean Silcoff and Robert Fife on Twitter @stevenchase @SeanSilcoff @RobertFife
Report an error Editorial code of conduct
Due to technical reasons, we have temporarily removed commenting from our articles. We hope to have this fixed soon. Thank you for your patience. If you are looking to give feedback on our new site, please send it along to feedback@globeandmail.com. If you want to write a letter to the editor, please forward to letters@globeandmail.com.
Comments