U.S. President Donald Trump signed an executive order on Wednesday declaring a national emergency and giving his government the authority to ban U.S. companies from doing business with foreign telecommunications suppliers that pose a security threat – a measure aimed at China’s Huawei Technologies.

The order said foreign adversaries are “increasingly creating and exploiting vulnerabilities in information and communications technology and services." It singles out “economic and industrial espionage against the United States and its people” as a chief concern.

While the order doesn’t single out China or Huawei, it gives U.S. Commerce Secretary Wilbur Ross the authority to bar specific companies in the interest of national security. U.S. national-security agencies and Congress have urged Washington to prohibit the use of Huawei gear in the 5G networks that will form the next generation of wireless communications in the United States.

The President’s order, which has been under consideration for the past year, was made at fraught time for China-U.S. relations as the world’s two largest economies raise tariffs on each other in an escalating trade war. The security decision could affect U.S. allies around the world, including Canada, which is under pressure to follow suit. Canada-China relations have also been at a low ebb since the December arrest of senior Huawei executive Meng Wanzhou in Vancouver.

The Trudeau government signalled Wednesday that it won’t be rushed into making a decision on whether to ban Huawei from the next generation of wireless networks in Canada, despite Mr. Trump’s executive order.

“We’re proceeding with this in a very methodical way and we’ll take the time that’s necessary to get it right,” Public Safety Minister Ralph Goodale told reporters when asked when Canada will make a decision on Huawei. Canada is conducting a review of the security risks of 5G technology.

Last week, Mr. Goodale had said a decision was possible before the October general election.

Separately in Paris, where he had attended a summit of world leaders and technology executives, Prime Minister Justin Trudeau said the eventual decision on Huawei’s involvement will be based on intelligence advice and facts rather than on politics. “We know that is it is extremely important that our citizens are safe and protected while at the same time give them a choice, opportunity and flexibility when it comes to technology,” he said.

The Trump administration and U.S. congressional leaders have also warned America’s Five Eyes allies – Canada, Australia, New Zealand and Britain – that failure to ban Huawei from 5G networks could limit the intelligence the United States shares with them.

“The President has made it clear that this Administration will do what it takes to keep America safe and prosperous, and to protect America from foreign adversaries who are actively and increasingly creating and exploiting vulnerabilities in information and communications technology infrastructure and services in the United States,” White House press secretary Sarah Sanders said in a statement on Wednesday.

Australia has already banned Huawei from 5G networks, while New Zealand prohibited one of its major telecoms from using the Chinese equipment in a 5G network being built there. Canada and Britain are conducting reviews of the security risks of 5G technology – studies that will determine whether Huawei should be barred from their 5G networks.

The U.S. ban order could also seriously affect other countries that have rejected Washington’s calls to ban Huawei, including foreign companies doing business in the United States. Major U.S. wireless companies have already distanced themselves from Huawei equipment, but smaller rural carriers in that country do use the firm’s gear in their networks.

“As with anything, we need to take a measured approach to how we deal with companies in Canada and with our international relations. Over all, our economy is doing well and we’ll take decisions that will allow us to maintain that progress,” Mr. Morneau said.

Under Chinese law, approved in 2017, companies in China are required to “support, co-operate with, and collaborate in national intelligence work.”

The Australian Signals Directorate (ASD), that country’s equivalent of Canada’s Communications Security Establishment, has publicly warned that 5G wireless networks will be different from previous generations and that equipment made by risky vendors cannot be safely used anywhere in this emerging technology.

“A potential threat anywhere in the network is a threat to the whole network,” Mike Burgess, director-general of ASD, said in a closely watched speech last fall.

Two former directors of the Canadian Security Intelligence Agency (CSIS), Ward Elcock and Richard Fadden, said the Trump executive order would put added pressure on the Trudeau cabinet to make a decision and to fall in line with Washington.

While the two former CSIS directors want Canada to ban Huawei from 5G, they said Ottawa should wait until relations with Beijing improve to avoid a further escalation of tensions.

“If I was the government, I would not want to rush to make that decision before we see how the Meng case falls out,” Mr. Elcock said in an interview. "I think, in the circumstances, if we were to make a decision and if it were to be negative – that just increases the [risk] that the Chinese would do something additional.”

China reacted harshly to Canada’s arrest of Ms. Meng at the request of U.S. law enforcement officials for her role in an alleged scheme by Huawei to circumvent U.S. sanctions on Iran.

The case against Ms. Meng, the daughter of Huawei’s founder, was filed amid a broader campaign against the Chinese tech company by Washington, which says Huawei’s networking equipment poses a national security threat.

China subsequently jailed two Canadians on allegations of acting to steal state secrets and banned imports of Canadian canola and other farm products.

“Given we are having this battle with China ... I just say right now they don’t need another poker in the fire but having said that the longer we delay the more we complicate life for Canadian companies,” Mr. Fadden told The Globe and Mail.

BCE Inc. and Telus Corp. have used Huawei equipment extensively in their existing wireless networks and have previously calculated that a Huawei ban would cost them more than $1-billion. Industry supporters of Huawei say its 5G equipment can be tested for back doors and say that Canada currently does not allow the Chinese tech giant into the core of telecom networks and prohibits it from bidding on Canadian government contracts.

Mr. Elcock said it’s more difficult to test Huawei’s 5G for risks because the new technology allows for too many entry points.

“A Chinese company will do pretty much what the Chinese government says."

Mr. Trump’s former national security adviser, General H.R. McMaster, told The Globe last week that the United States and other Western countries have been slow to understand the threat that China’s Huawei poses.

Conservative Leader Andrew Scheer, who has called for a ban on Huawei, criticized the Trudeau cabinet for taking so long to make a decision.

The Globe reported Monday that Huawei has launched a major lobbying and public-relations campaign to boost its standing with Canadians and federal decision-makers as the Chinese telecommunications giant tries to avoid being banned from next-generation wireless networks. 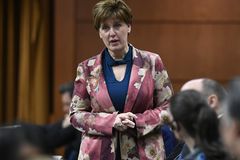 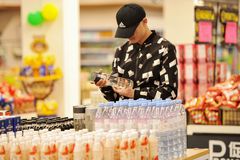 Freeland heads to Washington as talks over ending steel tariffs heat up
Subscriber content
May 15, 2019 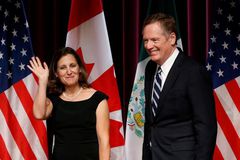