Renata Dubini, United Nations High Commissioner for Refugees director for the Americas, said Canada could add to its leadership role in finding a resolution to the crisis in the South American country by establishing a resettlement effort for Venezuelans, as it did for Syrian refugees four years ago. Ms. Dubini said such a program would be a “blessing” as surrounding countries take in most of the 4.5 million Venezuelans who have fled since 2015 – a number the UNHCR predicts will grow to 6.5 million by the end of 2020.

“It would be an incredible gesture from Canada in terms of substantive contributions to the region, to the concept of responsibility-sharing and to the welfare of those who are most in need,” Ms. Dubini said in an interview with The Globe and Mail Wednesday in Ottawa.

Canada is already active in the Lima Group, a regional bloc of countries working to find a peaceful solution to the Venezuelan crisis.

Jean-Nicolas Beuze, the UNHCR’s representative in Canada, said the agency has not presented a formal request for a Venezuelan refugee program to Ottawa, but the matter will be up for discussion with officials after Prime Minister Justin Trudeau swears in his new cabinet on Nov. 20.

Immigration Minister Ahmed Hussen’s office said Wednesday it would be inappropriate to speculate on the decisions of a future minister.

Mr. Beuze said Canada’s Syrian refugee-resettlement effort demonstrated that Canada can take in tens of thousands of newcomers over a short period of time with relatively few hiccups along the way. Mr. Trudeau campaigned during the 2015 election on a promise to resettle 25,000 Syrian refugees and made it an early priority when the Liberals formed government four years ago; Canada has since welcomed more than 40,000 Syrians.

Mr. Beuze said the government could adopt a similar approach for Venezuelans, welcoming them through both the government-sponsored and privately sponsored refugee streams, but also expand the effort to prioritize those who qualify as economic immigrants and international students.

“It doesn’t necessarily need to be a one-off big number. It can be done perhaps in a more sustainable way through the different pathways,” Mr. Beuze said.

Venezuela was among the top-10 countries for new asylum claims in Canada from January to June of this year, according to the Immigration and Refugee Board (IRB). Of the 931 Venezuelan asylum cases finalized by the IRB during that time period, 830 – or 88 per cent – were accepted, demonstrating the legitimacy of most protection claims stemming from the country.

Ms. Dubini said a special resettlement program would be a “win-win” for Canada and Venezuelans, as many of those who have fled Venezuela are educated and entrepreneurial. She said the Venezuelans that she has interviewed remind her of the asylum seekers she met while she was the UNHCR’s representative to Syria from 2009 to 2012.

“I have to say these are people with a strong resilience, commitment. They are humble people,” Ms. Dubini said.

Orlando Viera Blanco, Venezuela’s ambassador-designate to Canada, said a Venezuelan resettlement program in Canada would have a “huge impact” in taking the pressure off of South American countries, including Colombia and Peru, which have taken in millions of asylum seekers.

Mr. Blanco was appointed envoy for Venezuela’s self-declared interim president, Juan Guaido, in Canada after Ottawa expelled President Nicolas Maduro’s ambassador at the end of 2017. He will be officially recognized as Venezuela’s new ambassador at a ceremony in Ottawa Friday.

Canada recognizes Mr. Guaido as the interim leader of Venezuela, as Mr. Maduro continues to refuse to cede power. Venezuela’s economy has collapsed under the Maduro government, with widespread food and medicine shortages and inflation topping one million per cent in the past year. 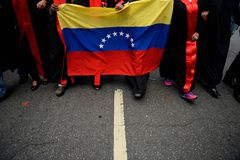 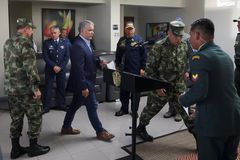 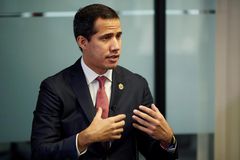