Canada has suspended new export permits to Turkey, joining the European Union in limiting weapon sales to the NATO ally, as Turkish troops invade northeastern Syria in an assault on Kurdish forces.

Speaking to reporters on the election campaign trail on Tuesday, Prime Minister Justin Trudeau condemned the Turkish incursion into Syria. Canada does not have any military or diplomatic presence in Syria, but Canadian troops are posted to the NATO mission in Iraq, which is currently led by Canadian Major-General Dany Fortin, and are also advising and assisting Iraqi security forces.

“We are engaged diplomatically and at the officials level with all of our allies and we will continue to monitor the situation closely, including the impact on Canadian Forces in nearby Iraq and elsewhere,” Mr. Trudeau said.

“The fight against Daesh [Islamic State] is the one in which countries around the world joined in and this is a situation that concerns us deeply.”

In a statement on Monday, Global Affairs Canada said the suspension of new export permits is temporary. Spokesman Sylvain Leclerc said the decision was taken in light of Turkey’s aggression in Syria.

“This unilateral action risks undermining the stability of an already-fragile region, exacerbating the humanitarian situation and rolling back progress achieved by the global coalition against Daesh,” Mr. Leclerc said in an e-mail.

Canada is also calling for the protection of civilians and for all parties to respect their obligations under international law, including “unhindered access for humanitarian aid” in Syria, Mr. Leclerc added.

European Union countries agreed on Monday to ban the sale of weapons and ammunition to Turkey – a move Turkey’s Foreign Ministry rejected and condemned.

U.S. President Donald Trump also announced on Monday sanctions aimed at restraining the Turkish assault on the Kurds in Syria.

The violence in northeast Syria erupted last week after the Trump administration abruptly announced that the United States would pull troops out of that region of the country. The American withdrawal made way for Turkish forces to move in and attack Kurdish fighters, whom they have long seen as terrorists.

Conservative Leader Andrew Scheer said “we would expect that any member of NATO would live up to international law and respect human rights." Turkey is a NATO member. He suggested a Conservative government would take the same step as the current government in halting weapons exports.

“In these early days of this conflict, we would certainly follow the same type of course of action,” he said.​

Melanie Richer, a spokeswoman for the New Democrats, said the party agrees with the government’s decision to halt arms sales to Turkey and urges the government "to use all available diplomatic means to protect civilians and speak out against Turkey’s unilateral incursion into Syria.”

Bessma Momani, a Middle East expert and professor at the University of Waterloo, said Canada’s move to halt exports to Turkey is “highly symbolic but unlikely to change Turkish behaviour.”

“Keep in mind that the United States is the number one destination of all Canadian arms sales, which is a number that is not disclosed. After that, almost half of remaining exports go to Saudi Arabia," she said.

In 2017, Canadian military exports to Turkey totalled more than $48-million. Turkey presses ahead with offensive in Syria, despite sanctions and growing calls to stop
October 15, 2019 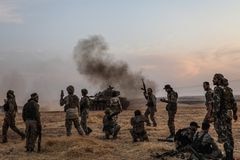