Canada has fired the starting gun on the race to ratify the new North American free-trade agreement – but the United States is setting the pace.

When it comes to approving the new U.S.-Mexico-Canada Agreement, Prime Minister Justin Trudeau says Ottawa intends to align itself “very much” with the time frame of the U.S. Congress, an institution that finds itself riven by partisan rancour, thanks in large part to U.S. President Donald Trump’s divisive style of leadership.

And with fewer than 20 possible sitting days left in the parliamentary calendar before the House of Commons rises for the summer, it remains an open question whether the agreement will be ratified in Ottawa before voters go the polls in October.

“We’re looking forward to having great conversations as we move forward with the ratification process,” Mr. Trudeau said Tuesday before his weekly cabinet meeting.

“We’re going to be aligning ourselves very much with the pace of the American administration … the deal, as it is, is a good deal for Canadians, it’s a great deal for people across the country, and we’re going to keep moving forward.”

Foreign Affairs Minister Chrystia Freeland, who tabled a motion Monday in the House of Commons to begin the ratification process, said since the original NAFTA remains in full force, there’s no rush to replace it with the deal the Americans call USMCA, Canada calls CUSMA and Mexico calls T-MEC.

Ms. Freeland, who briefed cabinet members on her plans, said other brand-new trade deals that started from scratch, such as Canada’s agreement with the European Union or the Trans-Pacific Partnership, required quicker action to ensure the economic benefits were promptly realized.

“With those deals, there was an urgency to ratification,” she said as David MacNaughton, Canada’s ambassador to the United States, stood alongside.

“As Canadians appreciate, we have a trade deal already in North America – it’s called NAFTA. So we have those benefits today.”

On May 17, the United States agreed to what Ms. Freeland calls a “full lift” of punitive tariffs on Canadian steel and aluminum, paving the way for Canada to begin the process of ratifying the agreement, which was reached late last September after months of difficult and often tense negotiations between all three countries.

However, with the Democrats in control of the House of Representatives and warring daily with the Trump White House, ratification remains far from a foregone conclusion, although U.S. Trade Representative Robert Lighthizer has been courting their support and House Speaker Nancy Pelosi has been sending encouraging signals in recent weeks.

Mr. MacNaughton, ever the optimist, said he believes Congress could indeed ratify the deal sooner rather than later.

“There is still, I think, a reasonable chance that the U.S. Congress will pass this deal before the summer recess at the end of July,” he said. “We want to be in a position where we can move in tandem with Mexico and the U.S. on this deal.”

On Thursday, U.S. Vice-President Mike Pence is scheduled to visit Ottawa, where he’s expected to meet with Mr. Trudeau and Ms. Freeland to discuss the legislative way forward on the agreement, which business leaders in Canada are anxious to see come into effect.

In a letter to be released publicly Wednesday, a number of prominent business lobby groups are encouraging Mr. Trudeau to begin preparing for the new trading landscape the new NAFTA promises to foster.

“Even before the agreement is fully ratified, there are opportunities for Canada, the United States and Mexico to collaborate in pursuit of a more productive and mutually beneficial trilateral relationship,” says the letter, which counts the Business Council of Canada, the Canadian Chamber of Commerce and the Canadian Federation of Independent Business among its signatories.

“For example, we would encourage all three governments to work together to enhance North American competitiveness and good regulatory practices as outlined in the agreement by establishing committees in each area to promote economic growth and strengthen regulatory co-operation.”

Liberals push forward with ratification of USMCA in House of Commons Subscriber content
May 27, 2019 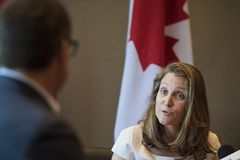