Canada this week will unveil the retaliatory measures it’s taking against the United States after President Donald Trump slapped tariffs on Canadian aluminum in August.

An announcement could come as soon as Tuesday, or as late as Wednesday, a government source said. The Globe granted anonymity because the source is not authorized to speak publicly about the matter.

Deputy Prime Minister Chrystia Freeland last month said the measures would amount to $3.6-billion and would go into effect on Sept. 16. They will be tariffs on U.S. imports, many of which contain aluminum.

In August, Canada released a list of possible targets, including washing machines, refrigerators and golf clubs. Officials have been consulting with Canadians for the last month about which products should be targeted to have the strongest possible impact on the United States, but inflict “minimal damage on Canada.”

The announcement this week, either Tuesday or Wednesday, will include Ms. Freeland, who also serves as Finance Minister, and International Trade Minister Mary Ng.

The two ministers will unveil the winnowed-down list of targets.

The U.S. tariffs took effect on Aug. 16 and apply to raw aluminum, which the White House says accounted for 59 per cent of Canadian exports of the metal to the U.S. over the past year.

Mr. Trump imposed them under Section 232 of the Trade Expansion Act, which allows the President to use tariffs for “national security” purposes. Mr. Trump has frequently used Section 232 to circumvent international trade rules, such as those of the U.S.-Mexico-Canada Agreement and the World Trade Organization.

Speaking to reporters Monday, Foreign Affairs Minister Francois-Philippe Champagne said Canada is not a security threat to the United States.

“Everyone in Canada understands aluminum from Canada is no threat to national security in the United States,” Mr. Champagne said. “I think that’s more obvious than ever. When you’re looking even at supply chains, which are going from global to regional, I mean, the real opportunity here is to think how can we build more in North America?”

“Obviously, we’re going to continue to negotiate, but we’re going to be prepared to react as we did last time. And I think Canadians understand that [we] stood up and we’ll stand up again for aluminum in Canada.”

The new trade battle is erupting during a difficult presidential re-election campaign for Mr. Trump.

In August, Mr. Trump accused Canadian industry of trying to “kill all our aluminum jobs” with a “flood” of exports.

The United States produces about a third of the aluminum necessary to meet its demand.

This means U.S. businesses and consumers will have to pay the tariff on Canadian imports or find other foreign sources, such as Russia.

Canadian aluminum sales to the United States totalled US$8.4-billion in 2017, the last full year without tariffs, accounting for 80 per cent of Canada’s exports of the metal.

The President imposed tariffs on Canadian aluminum and steel in 2018.

Two U.S. companies have lobbied Mr. Trump to reimpose tariffs, arguing that aluminum imports from Canada have surged since they were lifted. But Canadian metals producers, as well as most of the U.S. industry, say overall imports from Canada are comparable to their levels before the tariffs.

There is significant opposition to the Trump tariffs from U.S. business.

U.S. Chamber of Commerce executive vice-president Myron Brilliant in August called the aluminum tariffs “a step in the wrong direction” for the United States.

“These tariffs will raise costs for American manufacturers, are opposed by most U.S. aluminum producers and will draw retaliation against U.S. exports - just as they did before. We urge the administration to reconsider this move.” 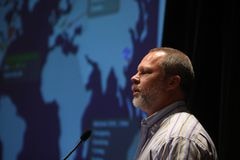 Opinion
Trump’s aluminum tariffs have Glencore’s prints all over them
Subscriber content
August 11, 2020

Opinion
It’s not me, it’s you: Trump’s aluminum tariffs are a byproduct of his re-election woes
August 11, 2020 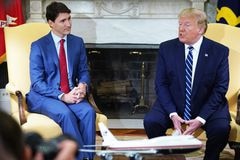