Western allies including Canada strongly denounced Russia Thursday for a campaign of computer hacking they say was aimed at undermining democracies and which targeted institutions from sports anti-doping bodies to the United Nations' chemical weapons watchdog.

The United States announced it had indicted seven Russian intelligence officers for conspiring to commit cyberespionage and steal data in a bid to delegitimize international anti-doping organizations and to expose officials who revealed a Russian state-sponsored athlete doping program.

In some of the strongest language aimed at Moscow since the Cold War, Britain said Russia had become a “pariah state.” The United States said Moscow must be made to pay the price for its actions. And their allies around the world issued stark assessments of what they described as a campaign of hacking by Russia’s GRU military intelligence agency.

The Canadian government joined in the condemnation and also publicly acknowledged that Russian military intelligence in 2016 hacked into the database of the World Anti-Doping Agency (WADA), a group that polices the use of illegal performance enhancements by athletes. This incident has been previously reported but Canada had not offered any extensive public comment about it before.

Earlier Thursday, the Dutch government revealed that the Russian military’s GRU intelligence arm had tried to use cybertools to gain access to the computer networks of the Organisation for the Prohibition of Chemical Weapons (OPCW), the global chemical weapons watchdog. The Netherlands military said that in April four Russian intelligence officers had set up specialized equipment near the watchdog’s offices in The Hague and were preparing to hack its network.

Ottawa in Thursday’s statement said it strongly believes Moscow was behind this Dutch incident. “The Government of Canada assesses with high confidence that the GRU was responsible for this attempt," the government said. Canada is a member of the OPCW and currently sits on its executive council.

The Russian embassy in Canada rejected the criticism from Western countries, saying the accusations were lies designed to distract the populations of NATO countries.

“The recent round of anti-Russian witch hunt[s] by the United States and United Kingdom and their willing allies, including Canada, over alleged cyber attacks, is nothing more than cheap spy fiction and fake news,” the embassy of the Russian Federation in Canada said in a statement.

“The major goals of this brazen propaganda are to brainwash and scare domestic and international audiences with non-existent Russian threat as well as to distract attention from NATO countries’ expanding their offensive cyber war capabilities.”

Relations between the West and Russia have deteriorated ever since Moscow invaded Ukraine in 2014 and annexed Crimea.

The Netherlands hacking incident followed Russia’s March 18 use of a Novichok nerve agent in Salisbury, U.K., against Sergei Skripal, a former Russian military officer who had worked as a double agent for the U.K.’s intelligence services, as well as his daughter Yulia Skripal.

“Canada joins its allies in identifying and exposing a series of malicious cyber-operations by the Russian military. These acts form part of a broader pattern of activities by the Russian government that lie well outside the bounds of appropriate behaviour, demonstrate a disregard for international law and undermine the rules-based international order,” the Canadian government said.

U.K. Foreign Secretary Jeremy Hunt called the Russian military actions “reckless and indiscriminate" and that this interference, which extends to meddling in foreign elections, “demonstrates their desire to operate without regard to international law or established norms and to do so with a feeling of impunity and without consequences.”

Canada is not expelling any Russian citizens in tandem with this public statement Thursday, according to Foreign Affairs Minister Chrystia Freeland’s office. The Dutch government announced it had kicked out four Russian intelligence officers in connection with the April hacking attempt in The Hague.

The foiled Netherlands cyberattack is only the most recent effort by Moscow to break into the computers of international watchdog groups.

Since 2014 Russia had faced accusations of state-sponsored doping schemes to illegally boost athletic performance and later Russian athletes were banned from various international competitions for this practice. In the years that followed, international watchdog groups that monitored doping found themselves under cyberattack.

In 2016, WADA, publicly disclosed that the cyberhacker group Fancy Bear/APT28 had released confidential athlete data that had been stolen from the watchdog group’s computer network. “The government of Canada assesses with high confidence that the Russian military’s intelligence arm, the GRU, was responsible for this incident," Ottawa said yesterday.

In 2016, the Canadian Centre for Ethics in Sport, Canada’s anti-doping group, was compromised by malware enabling unauthorized access to the centre’s network. "The Government of Canada assesses with high confidence that the GRU was responsible for this compromise.

“The incidents identified by Canada and our allies, including the GRU’s attempt to undermine the work of the OPCW, underscore the Russian government’s disregard for the rules-based international order, international law and established norms," the Canadian government said Thursday.

Ottawa said it was acting in part due to an accord struck at the G7 Summit in Canada where all parties agreed to work together to “hold malicious cyber-actors to account, denouncing their actions and imposing costs upon them.”

Ms. Freeland’s department on Thursday was asked to identify any new measures it was imposing on Russia as a result of the latest hacking revelations. It could not immediately name any new actions.

In April, Canada expelled four diplomats in concert with a worldwide effort to punish Moscow for the Salisbury nerve-agent attack. One of them was a Russian embassy spokesperson who distributed to reporters documents from the Fancy Bear hacking group that attacked the WADA in Montreal. 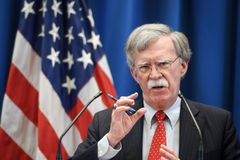