The Canadian government has no plans to lead the way amid growing calls for an international boycott of the 2022 Olympics in China.

Foreign Affairs Minister Francois-Philippe Champagne told the House of Commons special committee on Canada-China relations Monday that a decision on a boycott should be left to private sports bodies participating in the Winter Games in Beijing.

“I think when it comes to sports and politics … one has to be careful. That is a decision for the Canadian Olympic Committee to make and certainly we will look to see their decision when it comes to the Olympics in Beijing,” Champagne told MPs.

Conservative foreign affairs critic Michael Chong raised the issue, noting that former Privy Council clerk Michael Wernick had suggested last week that the government should start preparing the Canadian public for a boycott of the Olympic Games. The Winter Olympics are scheduled to take place in Beijing in February, 2022.

David Mulroney, a former Canadian ambassador, has called on Ottawa to boycott the Olympic Games and to impose sanctions on China for its human-rights abuses. John Higginbotham, who previously served as commissioner for Canada in Hong Kong, a role equivalent to an ambassador, has also said Canada should organize a boycott of the Games unless China “lays off Hong Kong.”

In September, more than 160 human-rights groups called on the IOC to withdraw the Games from Beijing because of gross human-rights abuses. In a letter, the organizations said China has put more than one million Uyghurs in detention camps and set up an “Orwellian surveillance network” in Tibet and crushed democratic dissent in Hong Kong.

Britain’s foreign secretary, Dominic Rabb, has refused to rule out boycotting the Beijing Games because of the treatment of Uyghurs and other ethnic minorities in China’s Xinjing region, where they have been subject to mass incarceration, forced sterilizations and forced labour.

United States Senators Rick Scott and Josh Hawley have urged NBC Universal, which owns the rights to broadcast the Beijing Olympics, to “pick human rights over profits” and refuse to air the Games.

A Canadian House of Commons committee recently accused China of committing “genocide” against its Muslim minorities and has called for Magnitsky-style sanctions against Chinese officials. The committee did not call for a boycott of the Olympics.

Beijing is set to become the first city to play host to both Summer and Winter Games.

In his testimony Monday evening, Champagne appeared to back off a pledge to unveil a new framework for Canada-China policy before the end of the year.

Under questioning from MPs, the minister would only say that Canada’s China policy is “evolving” and that is based on Canadian interests, values and principles on human rights and rules and partnership.

“Our foreign policy needs to evolve with an evolving China … and that is what we are already putting in motion,” he said.

Senior officials have privately played down the significance of Champagne’s talk of a new China policy. Officials told The Globe there will be no formal declaration on China but relations will be managed with the new reality that Chinese President Xi Jinping has adopted an aggressive and regressive policy within China and to the outside world.

In his opening remarks, Champagne acknowledged that the China of 2015 is not the China of today, expressing concern about its expansion policies, including in the High Arctic.

“We see a country and leadership that is increasingly prepared to throw its weight around to expand its interests,” he said. “China’s ambition even reaches the Arctic region with aims to develop shipping lanes … this is a new reality that we need to take into account and thus engage with China with eyes wide open.” 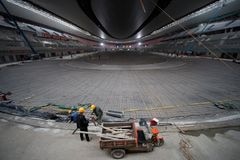