Prime Minister Justin Trudeau says Canada will not retaliate against the U.S. after it banned exports of critical medical supplies like masks.

"We are not looking at retaliatory measures or measures that are punitive,” Mr. Trudeau said Saturday at his daily press conference about Canada’s response to the novel coronavirus pandemic.

“We know that it is in both of our interests to continue to work collaboratively and cooperatively to keep our citizens safe.”

On Friday the United States stopped the export of masks from Minnesota-based 3M to Canada. Mr. Trudeau called the move a “mistake,” but as of Friday evening President Donald Trump was unmoved by Canada’s urging to reverse the order.

In Ontario, Premier Doug Ford compared the decision made by Mr. Trump to someone telling a relative: “you go starve and we’ll feast on the rest of the meal.”

The move from the U.S. is putting added pressure on the already tight supply of personal protective equipment that Canadian health-care workers need to maintain their own safety as they treat patients with COVID-19, the disease caused by the novel coronavirus. Mr. Ford said Ontario is waiting for a shipment of masks from 3M that numbers in the millions, and that while 3M wants to fulfill the order the company’s “hands are tied right now” by the White House.

In an executive order, Mr. Trump gave the Federal Emergency Management Agency the power to “allocate to domestic use” several types of medical personal protective equipment that would otherwise be exported. Mr. Trump told reporters Friday he would use the Defense Production Act to prevent U.S. companies from selling N95 respirators, surgical masks, gloves and other personal protective equipment to other countries.

Federal and provincial officials appear to be holding out hope that Ottawa will still be able to convince the United States to reverse its decision.

Mr. Trudeau said Canadian officials are talking to their counterparts in the U.S. at all levels of government to make their case, and the Prime Minister will speak with Mr. Trump in the “coming days.”

The message from Canada is that the two economies are “interlinked in ways that mean that it would hurt both of our countries in our ability to protect our citizens were supply chains to be disrupted,” Mr. Trudeau said.

Canada also exports critical medical goods like tests and gloves to the U.S., Mr. Trudeau noted, as he pressed his point that both countries need cross-border trade to fight COVID-19.

The message isn’t being received at the White House, where on Saturday Mr. Trump said the U.S. would “use every power, every authority, every single resource we’ve got to keep our people healthy, safe, secure and to get this thing over with.”

“We need the masks, we don’t want other people getting it,” Mr. Trump said.

In the meantime, Mr. Trudeau said in the next two days Canada will get a shipment of masks from a chartered flight that will include millions of masks. He said the flight will also include items ordered by Quebec.

The supplies, arriving from China will include between seven million and eight million surgical masks, according to an official with Public Services and Procurement Canada. However, the shipment won’t include N95 respirators. The Globe and Mail is keeping the official’s name confidential because they were not authorized to speak publicly on the matter.

The official said Canada has hired Bolloré Logistics to manage its orders in China, including the warehousing, transportation and verification of goods.

Canada has also leased a warehouse in China to “to help collect and distribute these items as quickly as possible,” Mr. Trudeau said.

Also on Saturday, the Prime Minister announced additional funding for the most vulnerable communities in the pandemic.

He said $40-million in financial support will go to Women and Gender Equality Canada, with up to $30-million earmarked to address immediate needs of shelters and sexual assault centres.

Another $10-million will go to Indigenous Services Canada’s network of 46 emergency shelters.

The government also says $157.5-million will address the needs of Canadians experiencing homelessness.

The United States isn’t the only jurisdiction to clamp down on exports of critical supplies. On March 15 the European Union imposed restrictions on some exports for six weeks. Exports of personal protective equipment outside of its member states are now subject to an authorization “in order to ensure adequacy of supply in the Union in order to meet the vital demand,” according to the regulation.

Asked about that bloc’s decision, Mr. Trudeau said Canada is “continuing to impress upon countries around the world that they are hurting themselves when they limit the flow of essential goods across their borders.”

Elizabeth Renzetti: For some women, home is as dangerous as the virus

Mr. Ford said it’s clear with the export ban from the United States that Ontario needs to be self-sufficient. To get there he said Health Canada needs to speed up its approvals of medical equipment, and cannot act like it’s business as usual.

He said a Woodbridge company is waiting for approval to start manufacturing masks.

Mr. Ford said Ottawa’s supplies should be divided between the provinces and territories based on population, meaning Ontario should receive 40 per cent of imported supplies.

Werner Antweiler, who teaches international trade at the University of British Columbia, said North American supply chains are too integrated to make retaliation feasible — for either country.

"Businesses like 3M are organized along international trade lines, assuming there's an open border," he said. "When you interrupt the supply chains, everything stops, so we don't sent supplies to the United States, the U.S. can't send finished products to us. It makes everything worse."

Dr. Antweiler said a potential trade war is especially dangerous when medical supplies are involved and the consequences could affect patient health in both countries.​

“There is a very strong case that we need to stand in solidarity with our neighbors in the United States, and that means we should not retaliate in the same foolish way,” he said.

With reports from James Keller in Calgary, Karen Howlett in Toronto, Adrian Morrow in Washington, and The Canadian Press 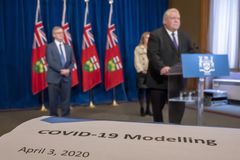 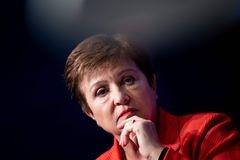 Alberta woman in her 20s dies of COVID-19 becoming youngest reported death in Canada
April 4, 2020
Follow Marieke Walsh on Twitter @mariekewalsh
Report an error Editorial code of conduct
Due to technical reasons, we have temporarily removed commenting from our articles. We hope to have this fixed soon. Thank you for your patience. If you are looking to give feedback on our new site, please send it along to feedback@globeandmail.com. If you want to write a letter to the editor, please forward to letters@globeandmail.com.
Comments