Canada’s ambassador to China faced tough grilling from opposition MPs on Wednesday night over his role as the head of an international consulting company that has close ties to Beijing and advised a Chinese state-owned firm that was involved in building militarized islands in the South China Sea.

Dominic Barton, the former global managing partner of McKinsey and Co., denied that his past business relationship with China or his family’s investments would influence his actions as envoy to Beijing.

In his appearance at Parliament’s Canada-China committee, Mr. Barton said he took the ambassador posting in September in a bid to end a chill in bilateral relations and to win the release from prison of Canadians Michael Kovrig and Michael Spavor and obtain clemency for Robert Schellenberg, who Chinese authorities sentenced to death for drug dealing.

But Conservative and NDP MPs zeroed in on Mr. Barton’s nine years leading McKinsey, which has significant business dealings in China, and his past statements about his enthusiasm for China as a place to do business.

”I’m a bull on China,” he told the Council on Foreign Relations in 2016, adding: “I probably drank the Kool-Aid there for too long.”

Conservative Garnett Genuis said Mr. Barton was a “completely inappropriate choice as ambassador” because of McKinsey’s ties to China’s authoritarian regime, particularly because it advised a state-owned construction company that built militarized islands in the South China Sea in violation of international law.

When asked if McKinsey knew that China Communications Construction Co. had been barred by the World Bank for bid-rigging in the Philippines or its role in the South China Sea, Mr. Barton said he could not remember.

He said that just because McKinsey worked for a company that built the islands doesn’t mean McKinsey helped it build them.

“You were in charge of the company, sir. … The buck stops with you, and you were running the company,” Mr. Genuis replied.

NDP MP Jack Harris asked why McKinsey held a 2018 corporate retreat in Kashga, about six kilometres from an internment camp that holds thousands of Muslim Uyghurs in Xinjiang province.

“There was no awareness at all on McKinsey’s side that there was anything going on in the camps and if [company officials] had, they wouldn’t done it,” Mr. Barton said.

He also told MPs he put all his holdings in a blind trust and set up a conflict-of-interest screen that would shield him from making decisions that could benefit himself, McKinsey or BlackRock Inc., a global asset management firm where his spouse is Asia Pacific corporate chief.

Mr. Barton said he has too much integrity to profit from his envoy duties, and took the job to help Canada.

“This is the stupidest economic decision I could have made in my life,” he said. “I have no interest in making money from this.”

Liberal MP Rob Oliphant objected to the “American-style” questioning of Mr. Barton, saying “everything about the appointment has been for the best interest of Canada.”

Earlier in the House of Commons, Prime Minister Justin Trudeau said he had confidence in Mr. Barton, who is “a deep expert in how we are going to move forward on improving the situation for Canadians in China right now.”

Mr. Barton said he has tried to use his connections to top Chinese officials and business people to repair the bilateral relationship, which is in a deep chill.

“I am committing to resolving the challenges in the bilateral relations … but critical to that will be the release of the two Michaels and clemency for Robert Schellenberg,” he said.

He praised the resiliency of the three men, particularly Mr. Kovrig and Mr. Spavor, who were arrested in December, 2018, and are in a Chinese prison with the lights on 24 hours a day in what is believed to be Beijing’s retaliation for the arrest of Meng Wanzhou, a senior executive of Huawei Technologies Co. Ltd., on an extradition warrant from the United States.

Asked if he has met Huawei officials as ambassador, he said: “I have had outreach from them from some of the senior vice-presidents.”

The conversations concerned Ms. Meng’s case, but were not negotiations, he said. Asked whether the idea of a prisoner swap ever came up, he said, no.

Mr. Barton said Canada is not interested in trading the two Michaels for Ms. Meng, as proposed by former Liberal foreign affairs minister John Manley and Eddie Goldenberg, who was a top adviser to prime minister Jean Chrétien.

The minority Liberal government voted against creating the committee, which is looking at Canada-China relations, but it was outnumbered by opposition votes. 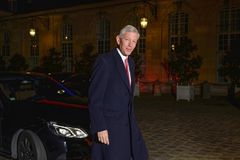