Subscribe to The Globe and Mail’s politics newsletter for the latest election updates. Party-preference polls from Nanos Research, in partnership with The Globe and CTV, are released every morning through the campaign.

Since the COVID-19 pandemic began, five out of 10 provinces plus Yukon have held elections. Those races, as well as national votes in other countries, have given Elections Canada plenty of ideas about how to make their polls COVID-19-safe. The agency has had months to prepare because an election call was long expected (more on that later).

What to expect when voting starts

How many Canadians are voting by mail?

Only about 250,000 Canadians voted by mail in 2019, but that was before the pandemic: Elections Canada prepared for higher-than-usual volume this year, and they got it (see chart below). The application deadline for kits was Sept. 14, so if you didn’t get one and didn’t vote in an advance poll, the only remaining option is the in-person vote on Sept. 20.

What voters can do ahead of time

House of Commons seats at dissolution

There are 338 seats in the House up for grabs. A party needs at least 170 to win a majority, and at least 12 to hold official party status (which affords MPs more access to questions in Question Period and to certain kinds of parliamentary funding). Here’s what the seat count looked like when Parliament was dissolved. 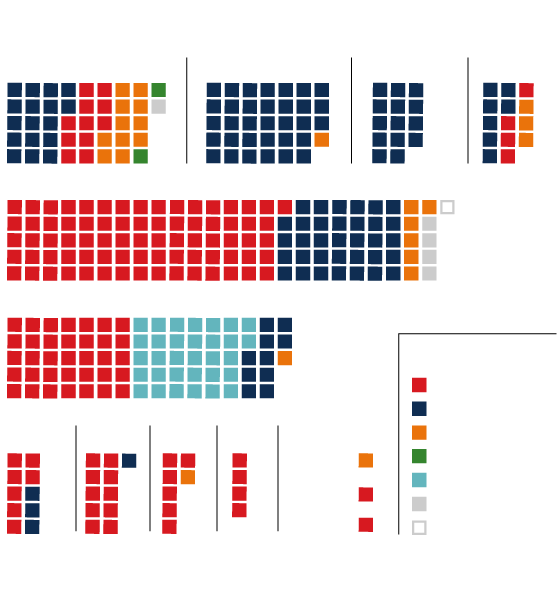 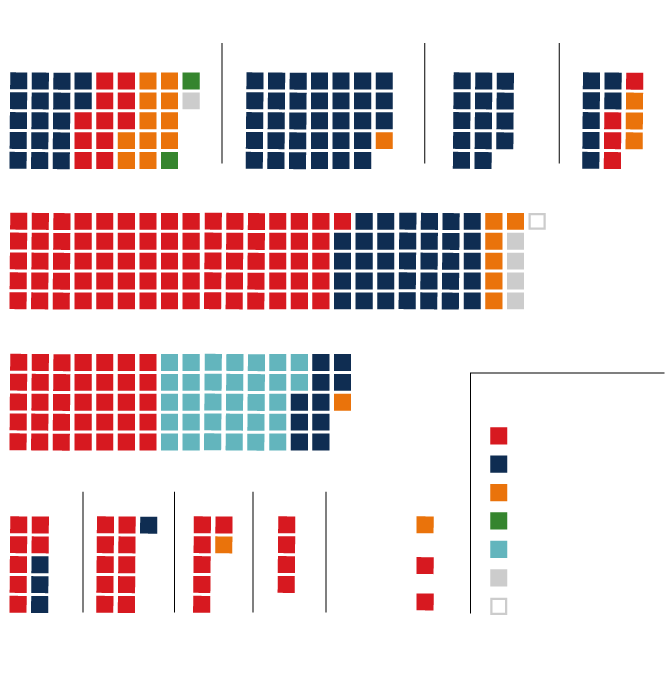 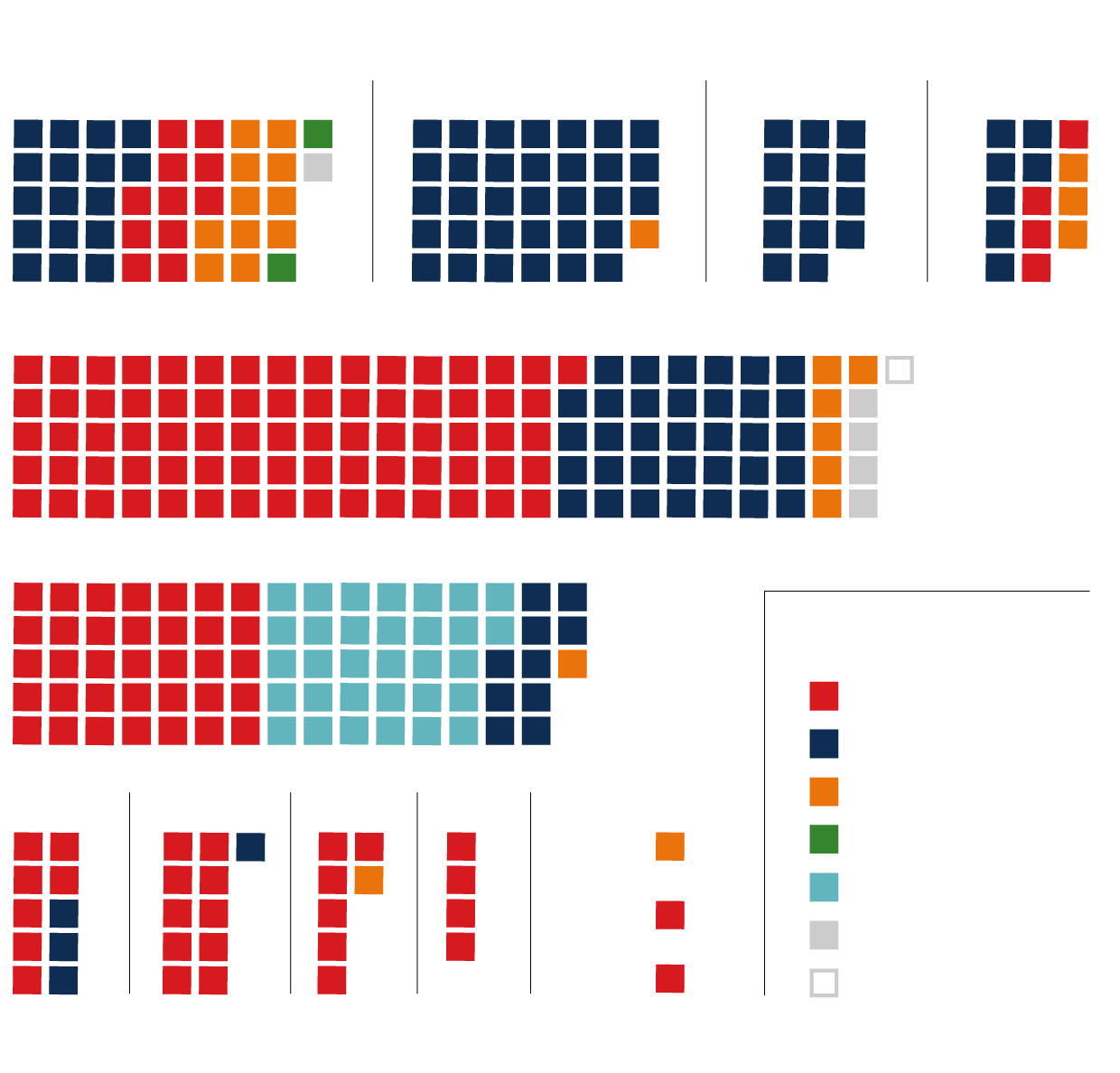 Two years ago, Justin Trudeau’s Liberals were reduced to a minority just months before a COVID-19 pandemic that spurred billions of dollars in emergency relief, unprecedented limits on travel and radical changes in how Parliament operated. Public-opinion polls have generally shown majority support for Mr. Trudeau’s handling of the crisis, and with the other parties’ approval ratings trailing behind, it is an advantageous time for Mr. Trudeau to call an election, and every party has known that for some time. If Mr. Trudeau can get the Liberals back to majority, they will not depend as much on opposition support for the next phases of postpandemic recovery.

MORE READING ON TRUDEAU AND THE LIBERALS

Campbell Clark: Trudeau pushes his way to centre of debate like a leader running out of time

Robyn Urback: In a campaign about nothing, Liberals struggle to find a wedge issue

The 2019 election was a moment of reckoning for the Conservatives, who had hoped to unseat the Liberals but didn’t break through in Quebec as they had hoped. Erin O’Toole, who won the leadership last August, is looking to succeed where his predecessor, Andrew Scheer, did not. His party’s riding associations are, on average, well positioned to outspend their Liberal counterparts. But Mr. O’Toole’s real challenge is to promote policies and messages that expand the Tory base, such as embracing a form of carbon pricing and playing down the party’s social-conservative elements.

MORE READING ON O’TOOLE AND THE TORIES

Profile: Erin O'Toole is changing Canadian conservatism as we know it

John Ibbitson: O’Toole is the most Liberal leader the Conservatives have ever had

For two years, the NDP-Liberal alliance has kept the minority government functioning despite Conservative and Bloc Québécois opposition on confidence motions, such as last year’s budget (which introduced NDP-friendly programs such as universal child-care funding and extended pandemic relief). Leader Jagmeet Singh stressed that the New Democrats wouldn’t trigger an election while the main focus was on fighting the pandemic. Now that an election is here, Mr. Singh’s task is to retake lost ridings in B.C., gain ground in Ontario and Quebec and build a critical mass of support among young people.

MORE READING ON SINGH AND THE NDP

Gary Mason: Jagmeet Singh is on a roll. This is bad news for Justin Trudeau

Campbell Clark: Singh’s promise to end oil subsidies not as clear as it sounds

The Bloc more than tripled its seat count in 2019. Since then, the party has repeatedly voted non-confidence in the government, which could have triggered an election if not for Mr. Singh’s support for the Liberals. But the Bloc also warned Mr. Trudeau to avoid a pandemic election at all costs; this year, they tabled a motion to hold the government to that, and while all parties supported it, the motion didn’t clearly define when the pandemic could be considered “over.” So the election came anyway, and now the Bloc’s challenge will be to hold its ground in Quebec.

MORE READING ON BLANCHET AND THE BLOC

Campbell Clark: It’s time for the Bloc and NDP to tell us what their minority bottom line is

Editorial: Who really speaks for Quebec, and what are they saying?

Civil war within the Green Party has left it more disorganized, and with fewer MPs in the House, than after the past election. Leader Annamie Paul has been trying to quell an internal conflict over Middle East policy that prompted a Green MP from New Brunswick, Jenica Atwin, to cross over to the Liberals this summer. For now, Ms. Paul and her supporters have successfully averted a non-confidence motion in her leadership, leaving them free to focus on winning her a seat (she currently doesn’t have one) and pressing for climate action on the campaign trail.

MORE READING ON PAUL AND THE GREENS

Watch: Adam Radwanski of The Globe and Mail and Emma Gilchrist of The Narwhal talk about the climate-crisis issues that should be top of mind in the 2021 election.

It’s “code red” time for countries to cut their greenhouse-gas emissions, a landmark United Nations report warned in early August. Some threats, such as initial rises in sea levels and extreme temperatures, will continue in the coming decades, but immediate and drastic action will make them less severe and deadly, the Intergovernmental Panel on Climate Change found. That leaves governments like Canada’s with two challenges: Decarbonizing their societies at a faster pace, and building infrastructure that will withstand the effects that can’t be avoided.

MORE ON THE CLIMATE CRISIS

Adam Radwanski: A new carbon capture subsidy is pivotal to this election’s debate about the future of the fossil-fuel industry

What does ‘net zero’ actually mean for Canadian business?

A year ago, Canada had no COVID-19 vaccines and no idea when effective drugs might be ready to use. Since then, the country’s rollout has outpaced most of the developed world, but there’s still a way to go. A pressing question of this campaign is whether and how federal employees can be mandated to take vaccines before they can return to work: The Liberals and New Democrats support mandatory vaccinations, while the Conservatives instead want a regimen of daily COVID-19 tests for unvaccinated workers.

How many COVID-19 cases are there in Canada and worldwide? The latest maps and charts

Finding an affordable house, condo or apartment is still a huge challenge for Canadians, especially in cities like Toronto and Vancouver, whose real-estate markets barely had a chance to cool down during the pandemic. Most responsibility for housing lies with provinces and municipalities, but the federal parties are promising to do what they can: The New Democrats want to give $5,000-a-year rent supplements and crack down on renovictions, the Liberals have promised a “Home Buyers’ Bill of Rights” and tax-free savings accounts for first-time buyers, and the Conservatives say they’d build a million homes over three years if elected.

Despite election promises, federal parties do not control many factors affecting availability, cost of homes

Rob Carrick: Only a big price drop will restore housing affordability. No federal party will acknowledge this

The pandemic was the biggest economic shock of recent Canadian history, so the parties’ usual election promises of job growth are taking on an added significance. So far, we’ve already recovered about 92 per cent of the Canadian jobs lost, Statistics Canada’s latest figures show, but wage growth is sluggish even though employers say they’ve had trouble filling positions. The conversation about the future of work includes not just how many people are employed, but how they live: The Liberals have been busy making deals with provinces on a promised universal child-care program, and for parents going back to work, much will depend on which party will be in power to implement, adjust or abandon that system.

How strong is Canada’s labour recovery? It depends on the data

David Parkinson: Canadian parties promise one million jobs, but we can get there no matter who gets elected

How does mail-in voting work?

What are the challenges facing the major political parties?

John Doyle: The farce of Canada’s televised federal leader’s debate is an insult to viewers and voters

John Ibbitson: Trudeau, O’Toole prevented from launching attacks at each other in tightly controlled debate

Campbell Clark: Trudeau pushes his way to centre of Sept. 8 debate like a leader running out of time

Campbell Clark: O’Toole walks out of Sept. 2 debate in one piece

André Picard: All parties should commit to lifting disabled people out of poverty

John Boyko: The lessons of Canada’s three most important elections

Sarah Boesveld, Pamela Uppal and Carolyn Ferns: Child care will be the defining issue of the election

The Liberals promise big spending on child care. The Conservatives, not so much

The Conservative platform sure looks different, now that it has numbers in it

The Conservative climate plan isn’t half bad. But the Liberal plan is better

From the Conservatives to the NDP, mental health has become an election issue – and nobody should be surprised

With reports from Kristy Kirkup, Marieke Walsh, Evan Annett and The Canadian Press

Editor’s note: MPs from parties without official status can sometimes ask questions in Question Period, although less often than MPs from official parties. An earlier version of this article included incorrect information. This version has been corrected.

View more suggestions in Following Read more about following topics and authors
Follow us on Twitter @globepolitics Opens in a new window
Report an error Editorial code of conduct
Due to technical reasons, we have temporarily removed commenting from our articles. We hope to have this fixed soon. Thank you for your patience. If you are looking to give feedback on our new site, please send it along to feedback@globeandmail.com. If you want to write a letter to the editor, please forward to letters@globeandmail.com.
Comments