The Armenian government is in possession of pieces of a Turkish-made military drone that includes air strike-targeting gear manufactured in Canada, The Globe and Mail has independently confirmed.

This equipment is at the centre of allegations that Azerbaijan is using drones, in the conflict over Nagorno-Karabakh, that contain restricted Canadian military technology originally approved for export to Turkey but then diverted to Azerbaijan. Turkey is a staunch ally of the Azerbaijanis.

The Globe sent a photographer to an Armenian military compound Thursday to take photos of the pieces of the downed drone in order to obtain first-hand evidence of what exactly the Armenians have obtained.

A Nagorno-Karabakh who’s who: What you need to know to understand Armenia and Azerbaijan’s conflict

A leading arms researcher on exports of this targeting gear, Kelsey Gallagher, said the equipment that the Armenians possess in the photos is in fact an MX-15D imaging and targeting device made by L3Harris Wescam of Burlington, Ont.

“While we know this is a Wescam sensor just by looking at the turret itself, the inclusion of ‘CMX-15D’ on the serial code of the base plate makes it irrefutable this is Canadian-made hardware," he said. "The same base plate is also branded with ‘Baykar,’ the manufacturer of the Turkish Bayraktar TB2 drone.”

Baykar has for some time included Wescam gear on its TB2 drones to perform surveillance and execute airstrikes.

Arms-control advocates and Armenian Canadians say The Globe photographs offer more corroborating evidence that military equipment approved for export to Turkey has been diverted to Azerbaijan.

They are calling on the Canadian government to cancel all outstanding export permits that enable the shipment of L3Harris targeting and imaging equipment to Turkey.

Armenian Prime Minister Nikol Pashinyan last week announced that his government had obtained fragments of a Turkish Bayraktar drone that he said was among a number shot down in the Nagorno-Karabakh clash. He said in a Facebook post that this included an “ultramodern optical unit” from Canada. Prime Minister Justin Trudeau’s government has twice declined requests from The Globe to address his comments.

Canada is obliged under domestic law and the global Arms Trade Treaty to prevent, detect and stop the diversion of military goods to users other than intended customers. It is also compelled to stop exports of such restricted goods that are shown to be used to harm civilians.

A month ago, Ottawa announced that the department of Global Affairs would investigate allegations from Armenian Canadians and arms-control researchers that Canadian military exports to Turkey had been diverted to Azerbaijan.

One week later it suspended permits enabling exports of L3Harris Wescam equipment to Turkey. This came after The Globe reported that the federal government had issued export permits this May for seven MX-15D devices be shipped to Turkey despite a moratorium on approving permits for new arms shipments that Ottawa first enacted in late 2019.

The Globe sent several photos Thursday to the Prime Minister’s Office and to the office of Foreign Affairs Minister François-Philippe Champagne, and asked them whether they were prepared to cancel the export permits, whether they would release the result of the Global Affairs investigation and whether Mr. Trudeau would apologize to Armenia’s Mr. Pashinyan.

In response, the government would only say that its investigation is continuing. “Canadian officials are investigating allegations made regarding the use of Canadian technology in the conflict and will continue to assess the situation,” Global Affairs spokesman Michel Cimpaye said in a statement.

Shahen Mirakian, co-president of the Armenian National Committee of Canada, said his group has been urging Mr. Champagne to dispatch a government representative to Armenia to verify that L3Harris Wescam gear is in these Turkish drones. He said that Canada is represented in Armenia through the Canadian embassy in Russia.

“We have asked Minister Champagne to send Canadian officials from Moscow to view the drone first hand and obtain all relevant information, but the minister has not provided a clear answer."

Mr. Champagne’s office said they are considering it, Mr. Mirakian said, but have not confirmed they would send someone.

“We want to believe that Global Affairs Canada is conducting the investigation in good faith and in the best interests of all Canadians, but it is hard to sustain that belief when they refuse to take the best opportunity they are provided to collect evidence,” Mr. Mirakian said. "We remain hopeful that we will soon be made aware of the concrete steps taken to advance the investigation.”

Asked for comment, the embassy of Azerbaijan in Ottawa did not address the diversion of drones but said “the reason the Republic of Azerbaijan uses [them] is in order to minimize … civilian casualties. " It said it only uses drones against “military infrastructure that is illegally located by Armenian army in Azerbaijani territories.”

L3Harris Technologies, the U.S. parent company of L3Harris Wescam, said it abides by all export rules and regulations.

“L3Harris fully adheres to all defence export rules and regulations set by the Canadian government and will continue to work with the appropriate agencies,” the company said in a statement. “The company took immediate action to comply with Canada’s suspension of export permits to Turkey," it added.

The Globe sent several of the photos to the Turkish embassy in Ottawa. Its reply did not address whether it had diverted restricted Canadian technology to Azerbaijan.

“We believe that The Globe and Mail is missing the core of the issue … that 20 per cent of Azerbaijan’s territory is under illegal Armenian occupation for three decades,” the Turkish embassy said.

In the photos taken for The Globe Thursday, soldiers posed with the drone fragments and sensor. One soldier held up the Oct. 29, 2020, front page of an Armenian newspaper, Hayastani Hanrapetutiun, to show what date the photos were taken.

Mr. Gallagher, a researcher with Project Ploughshares, an arm-control group in Waterloo, Ont., has been researching L3Harris Wescam technology and exports to Turkey for more than a year. He produced a report on the matter in late September.

He said the photos “go a long way in proving that security forces of Nagorno-Karabakh indeed have possession of a Wescam sensor used by Azeri forces in the conflict" and that “Canadian weapons systems are appearing where they weren’t authorized.”

Mr. Gallagher said "it is also noteworthy that the [pictured drone] airframe includes markings of the Azerbaijani Air Force, further indicating that these weapons are being used in the Nagorno-Karabakh conflict.”

In addition, he said that the pattern of the camouflage uniforms worn by the soldiers in the photo “appears to be consistent” with the pattern used by Armenian forces.

Mr. Gallagher said it’s important to have the Armenian soldiers and newspaper in photos taken to help corroboration.

“Downed weapons systems are frequently photographed in conflict zones, but it can be difficult to judge the veracity of claims that they were taken in a specific location, or on a certain date. For instance, photos of a downed drone in Iraq uploaded today could have just as easily been photographs from northern Syria a couple years ago. This all has implications when it comes to arms control.” 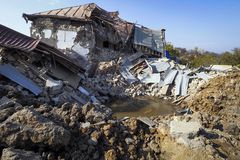 Azerbaijan, Armenia accuse each other of killing civilians in Nagorno-Karabakh conflict
October 28, 2020 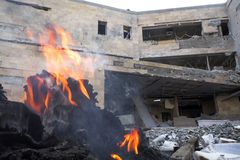 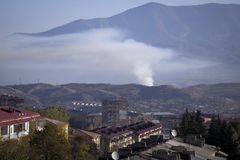