Governments across Canada are sitting on unfulfilled conservation promises that must be met to stem a biodiversity crisis, says a new report from the national charitable organization created to safeguard the country’s natural spaces.

The report from the Canadian Parks and Wilderness Society (CPAWS), which is to be released on Tuesday, says it is possible for Canada to meet its international commitment to protect 17 per cent of its lands and inland waters by 2020. But it will take specific commitments on the part of Ottawa as well as the provinces and territories, and not just pronouncements that are never realized, the report says.

To date, just 10.5 per cent of Canada’s land and fresh water has been protected. To reach 17 per cent, which was promised at a meeting of 194 countries in Japan in 2010, an area approximately the size of Alberta will have to be declared off-limits to development over the next two years.

“What we’re trying to do is apply pressure to governments across the country that have committed to these targets but have yet to put forward their plan,” says Alison Ronson, the national director of the parks program for CPAWS.

Federal, provincial and territorial environment ministers agreed at a meeting two weeks ago to put forward plans for contributing to Canada’s 2020 targets by the end of this year. Those plans must outline specific lands and inland waters that will be protected, and name the community partners or Indigenous partners that will ensure the protection actually takes place, Ms. Ronson says.

One way to get closer to 17 per cent, the CPAWS report says, would be for provinces to keep the commitments they have already made.

Newfoundland and Labrador, for example, committed decades ago to implement what it called a Natural Areas System Plan, but the protected areas that would be part of that plan have never been established.

Nova Scotia said in 2013 that it would protect a quarter-million hectares through the creation of 200 protected areas, but 100 of those sites have yet to be declared off-limits to development.

And Quebec has failed to deliver on a three-year-old pledge to enter “meaningful discussions” to protect the pristine Broadback Forest.

The CPAWS report proposes suggestions for each jurisdiction that, if adopted, would mean 14 per cent of Canada is protected – halfway from the current situation to meeting the 2020 targets.

If, for instance, Ontario agreed to permanently protect the North French River watershed, as has been proposed by the Moose Cree First Nation, that would save 5,000 square kilometers and one of the last sources of clean drinking water in the province.

Meeting the 2020 targets is critical, Ms. Ronson says, because there is a growing scientific consensus that at least half of the world’s lands and waters must be spared from development for the well-being of humanity as well as to safeguard biodiversity in nature. “If we don’t achieve our target of 17 per cent by 2020,” she says, “that doesn’t set us up very well for what we need to do beyond.”

CPAWS is concerned that governments may try to fudge their commitments as they scramble to meet the 2020 deadline. A temporary moratorium on resource exploration, or a promise by a forestry company not to log in a certain region for 80 years, are not considered effective conservation measures, Ms. Ronson says.

The goal of meeting the international commitments was made easier when the federal government promised in the 2018 budget to spend $1.3-billion for nature conservation over the next five years, CPAWS says. But the biodiversity of Canada is already under extreme threat.

A report released last fall by the World Wildlife Fund said half of all of Canada’s mammals, birds, reptiles, amphibians and fish populations had declined by an average of 83 per cent between 1970 and 2014.

“It’s absolutely shocking,” Ms. Ronson says. “What we really need to be doing is protecting habitats for these species that are obviously in free-fall.” 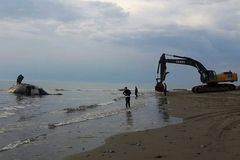 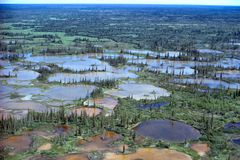 Online video of B.C. bears being fed by children sparks investigation
July 12, 2018
Follow Gloria Galloway on Twitter @glorgal
Report an error Editorial code of conduct
Due to technical reasons, we have temporarily removed commenting from our articles. We hope to have this fixed soon. Thank you for your patience. If you are looking to give feedback on our new site, please send it along to feedback@globeandmail.com. If you want to write a letter to the editor, please forward to letters@globeandmail.com.
Comments