Canadians can purchase bath towels, quilts and clothes through online retailers such as Amazon and eBay that are advertised as made with cotton from China’s Xinjiang region, a crop that human-rights activists and academics say is almost certainly the product of forced labour.

Critics say the ease with which consumers can purchase Xinjiang cotton products calls into question the commitment countries such as Canada have made to stop imports of goods made with forced labour. Canada signed a treaty as part of the 2018 renegotiation of NAFTA, to stop the importation of products made from coerced labour, and in early 2020 announced it would be cracking down on such goods from China.

Activists and United Nations rights experts have accused China of using mass detainment, torture, forced labour and sterilizations on Uyghur Muslims in Xinjiang. Beijing denies this and says its actions in the region are necessary to counter extremism.

Earlier this month, Canada joined allies including the U.S., Britain and the European Union in imposing sanctions on Chinese officials overseeing Beijing’s brutal treatment of Muslim minorities, including the Uyghurs. And in January, citing forced labour in Xinjiang, Ottawa said it was taking measures to address the risk of goods made using such labour from any country from entering Canada.

But as of the last week of March, Canadian consumers can find a lengthy list of products on sites such as Amazon.ca and eBay.ca that feature “Xinjiang cotton.” A list of products displayed on the two retailers includes: pillowcase covers, bath towels, quilts, skeins of cotton yarn, as well as shirts, tops and bedsheets.

Officials at eBay did not respond for comment on Xinjiang product offerings on its e-commerce platforms.

Amazon declined to comment but referred The Globe and Mail to its “Modern Slavery Statement” for the 18-month period ended June 30, 2020, where the company says it “does not tolerate modern slavery” and says it employs auditors to assess current and potential suppliers for signs of forced labour.

The statement says the company expects “selling partners” who sell through its website to “follow regulations and policies prohibiting modern slavery.” It also says Amazon expects suppliers to “consistently monitor and enforce these standards in their own operations and supply chain.”

Cotton is a major export from Xinjiang in northwestern China. Last year, End Uyghur Forced Labour, a coalition of 180 groups, including human-rights advocates and unions, estimated that one in five cotton garments sold in the world contains cotton or yarn from China’s Xinjiang region. Beijing has detained up to one million Muslim Uyghurs and other Turkic minorities in the region and forced some to work in factories.

Mehmet Tohti, the Ottawa-based executive director of the Uyghur Rights Advocacy Project, said it’s the federal government’s job to stop imports made with forced labour rather than leaving it to companies to shoulder the burden.

Darren Byler, an academic who begins as an assistant professor of international studies at Simon Fraser University this summer, has conducted research on Xinjiang for the past decade, including two years in the region. He said there is a high likelihood that cotton products from Xinjiang use coercive labour somewhere in their supply chain.

“This could be at the picking stage, where a great deal of Uyghur assigned unpaid or underpaid labour is used, or at the production stage,” Prof. Byler said, adding that the Chinese government aims to locate one in 10 textile jobs in Xinjiang by 2023.

Penelope Kyritsis, director of strategic research at Worker Rights Consortium, which monitors labour conditions in the garment industry, said the repression is so extreme in Xinjiang that verification methods that companies would typically use to ensure there is no forced labour in their supply chain aren’t possible in the region. Interviews with Uyghurs aren’t feasible given the Chinese government surveillance and the “climate of fear there,” she said.

“The fact you are able to buy on eBay a product that advertises Xinjiang cotton means that the Canadian government has a long way to go in terms of living up to its commitment to block these imports,” Ms. Kyritsis said.

The measures Canada announced in January include: prohibiting the import of goods produced wholly or in part by forced labour; requiring Canadian companies doing business in the region to certify that they’re not knowingly sourcing products or services from a supplier implicated in forced labour or other human-rights violations; and commissioning a study to determine the extent that Canada’s supply chains are tied to forced labour.

Mr. Tohti said the federal measures are a “joke” and do nothing to stop the importation of cotton from Xinjiang. Similarly, they are not stopping the delivery of products made with tomatoes, he said. About 20 per cent to 25 per cent of the world’s tomatoes come from Xinjiang. The Xinjiang Production and Construction Corps, one of the main government entities that runs detention camps for Uyghurs, also produces tomatoes for export that end up in ketchup and tomato sauce around the world.

Mr. Tohti said he has not heard of any instance where the Canada Border Services Agency has confiscated cotton from China, and urged Ottawa to table legislation that bans all products made from forced labour.

Conservative foreign affairs critic Michael Chong said Canada’s actions appear to be ineffective. He said importers, which are often small- or medium-sized businesses, do not have the resources to scrutinize their suppliers for evidence of coercive labour.

Both Mr. Chong and Mr. Tohti urged Canada to match the U.S. government’s decision to bar all cotton and tomato products from Xinjiang, including goods that are later processed in third countries.

NDP foreign affairs critic Jack Harris said Canada’s vow to block imports “doesn’t appear to be a serious commitment at this stage” and he supports recommendations from a recent parliamentary committee report that urged “strong punitive measures” to help stop this.

Asked for comment, Foreign Affairs Minister Marc Garneau’s department of Global Affairs said the federal department of Employment and Social Development is “actively monitoring and researching evidence related to problematic supply chains, including in the Xinjiang region of China” and is sharing its findings with Canada Border Services Agency (CBSA) that screens imports.

“The CBSA may use this information to identify and intercept shipments containing goods that have been identified as suspected to have been produced by forced labour,” Global Affairs spokesperson Patricia Skinner said. 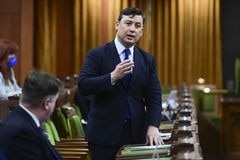 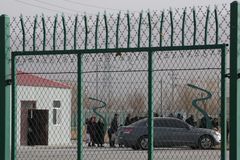 Opinion
A sloppy approach to Xi Jinping’s China would only put more than a million Canadians at risk
Subscriber content
March 26, 2021 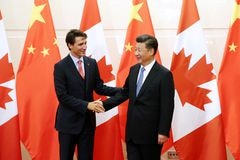