The provincial premiers who took Ottawa to court over the carbon tax have seen it blow up in their faces.

Just look at what Ontario’s Court of Appeal said on Friday, in crisp legal prose, and in black and white. First, the federal government’s carbon-levy “backstop” is perfectly within Ottawa’s jurisdiction. And second, it’s not a tax – it is a regulatory charge tied to the purpose of reducing greenhouse gas emissions (GHG.)

The Ontario court didn’t just smack back the challenge presented by Premier Doug Ford’s government, it wrote its opinion in paragraphs that could be lifted and inserted into the federal Liberals’ social-media ads. And probably will be.

The Ontario finding came on top of the Saskatchewan Court of Appeal’s knockdown of that province’s challenge in May. That’s not the final word – Saskatchewan Premier Scott Moe has already appealed to the Supreme Court, and Alberta Premier Jason Kenney is taking it to court, too.

But the politically crucial thing is this: the score, as it stands at the outset of the federal election campaign, is two-to-zero for Prime Minister Justin Trudeau’s carbon levy.

The provincial carbon-tax opponents – Mr. Ford, Mr. Moe and Mr. Kenney – had dreamed of derailing Mr. Trudeau’s carbon-pricing plan just before the October election. That would have been a body blow to the federal Liberals. Mr. Trudeau’s grand bargain on energy and environment, in which he promised both pipelines to get oil to market and action on GHGs, would be in tatters. The Liberal government would be scrambling.

Instead, it has two advertisements for the federal plan written by judges. And they wrote them at the invitation of Messrs. Ford and Moe.

Of course, the average Canadian is not going to pore through the Ontario Court of Appeal’s 93-page decision. But it did provide some pithy judicial answers to questions raised about the federal plan.

Opponents, including federal Conservative Leader Andrew Scheer, had called the federal carbon levies an intrusion into provincial jurisdictions. The court said that it is not.

The court found the carbon-pricing plan is within the federal government’s constitutional power to legislate for “peace, order and good government” on matters of national concern. “The need for a collective approach to a matter of national concern, and the risk of non-participation by one or more provinces, permits Canada to adopt minimum national standards to reduce GHG emissions,” the court concluded.

In fact, the Ontario court went some way to argue that if Ottawa is unable to act, it would be unfair to some parts of the country. The Atlantic provinces and northern territories are responsible for a small part of Canada’s greenhouse gas emissions, but are expected to suffer the greatest impact from climate change. “Without a collective national response, all they can do is prepare for the worst,” the court opined.

And then there’s that other key question that a lot of voters pose: Is this just a tax grab? A court can’t answer that political question, but it gives Mr. Trudeau’s government some judicial talking points. After noting that the federal statute requires sums be returned to the provinces where they are collected, the court found that the carbon levies are not taxes, but charges tied to the purpose of regulating carbon emissions. “They are not taxes,” the court concluded.

That is really a technical legal point, and the reason it matters is that there are constitutional requirements for adopting a tax. But the Liberals spend so much time insisting it is carbon pricing, not carbon taxes, and trying to convince people the point is to regulate pollution, not to raise money. The smart money will bet the Liberals will be quoting those four words from the Ontario Court of Appeal – “they are not taxes” – in their social-media messaging.

None of that is really going to sway people who already have an entrenched view for or against those carbon levies. But there are a lot of people who aren’t so sure, who might have wondered whether Ottawa was pushing its way into provincial turf, for example, and now the Liberals can cite the courts when they answer.

Mr. Ford and Mr. Moe wanted to fight tooth and nail against the carbon tax, hoping to leave Mr. Trudeau scrambling with no workable plan. It turns out they’ve paid a bunch of lawyers to give the federal Liberals talking points before an election campaign. 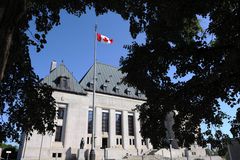