There are two completely separate columns to write from an interview with Peter MacKay.

One is about the middle-of-the-road, centrist Peter MacKay, and that probably won’t help him with the red-meat-eating base he needs to court if he wants to clinch the Conservative Party leadership. That Peter MacKay showed up in an interview with The Globe and Mail last week over the phone from Thunder Bay.

So did the more combative, tough-on-crime Conservative who said he won’t apologize for the parts of his victims’ rights agenda that were struck down as unconstitutional, promised to get rid of the “unfair” carbon tax and took a chippy tone with a reporter challenging a vague answer. That Peter MacKay probably has a better chance to strike a chord with the rank and file.

Middle-of-the road Peter MacKay talked about cutting taxes, but the same way as Prime Minister Justin Trudeau: He said he’d raise the basic personal amount exemption to take more people off the tax rolls, only go farther than Mr. Trudeau. He wants smaller government but won’t point to anything specific that Ottawa would stop doing under a Peter MacKay government. Instead, he issued a standard promise of Liberals and Conservatives to review programs and tackle inefficiency.

Is he a China hawk? He didn’t sound like one. He said relations are rough now, after China detained two Canadians as a “retaliatory act” for the arrest of Huawei chief financial officer Meng Wanzhou, but that it is important for Ottawa to work at the highest levels to improve that relationship. He even described Mr. Trudeau’s new ambassador to China, Dominic Barton, as very able.

Mr. MacKay’s words on China won’t fire up the base. The Peter MacKay who can’t name anything he’d cut from government is walking into the criticism of his adversaries. Durham MP Erin O’Toole, a heretofore middle-of-the-road Conservative who is positioning himself as a rock-ribbed, true-blue, populist conservative in the leadership race, has said Mr. MacKay would turn the Conservatives into “Liberal Party lite.”

But then there’s the tough-on-crime Peter MacKay who dismisses the carbon tax as elitist and gets his back up when challenged by a reporter.

He picks the Victims’ Bill of Rights as his biggest accomplishment in government. He defended the victims’ surcharge imposed for every conviction, which he made mandatory as justice minister – even though the Supreme Court struck it down as cruel and unusual punishment. “I will never apologize for having stood up for victims,” he said.

That attitude seems more in tune with the conservative populist mood of his party. So is his condemnation of carbon taxes as being ineffective and unfair to people in rural areas who would pay more.

Which is the real Peter MacKay? Both. The tough-on-crime attitude has been in his political DNA since he was a Crown prosecutor. Unlike Mr. O’Toole, who seems to have made a tactical decision to shift ideology, Mr. MacKay has always stood in many places. His political instincts are instinctive. Mostly.

Sometimes he is in one position and its opposite, notably on climate change. The front-runner won’t be nailed down on much except that he thinks carbon taxes are bad. He both dismisses the need for Canada to reduce emissions and says it is important to do so.

Would he adopt policies to reach current goals to reduce emissions by 30 per cent by 2030, or the Liberals’ new target of “net-zero” by 2050? Those goals, he said, are “aspirational.”

It is both an answer and not. It sounds like a goal to be strived for, but not reached. Or both. Or neither. Webster’s defines aspirational as “having or showing a desire to achieve a high level of success or social status.” When The Globe’s Marieke Walsh noted his answer was not clear, Mr. MacKay said, “You don’t get to tell me what my answer is. I’m telling you, it’s aspirational.”

So it is. Mr. MacKay is a Conservative front-runner who is running on electability – and after two decades in Conservative politics, his conservative identity is still hard to define. 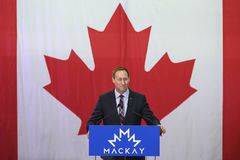 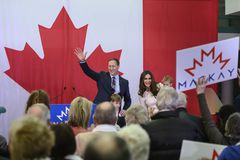