Federal Privacy Commissioner Daniel Therrien is launching an investigation of Statistics Canada over its plan to force banks to hand over banking records that would allow detailed tracking of how and where Canadians spend their money.

The agency’s plan surprised Canada’s banking sector, and the issue dominated Question Period on Wednesday as Conservative MPs accused the government of allowing Statscan to create a massive database on individual Canadians without their consent.

Mr. Therrien announced the investigation on Wednesday afternoon. His office said it has consulted with Statscan about its plans but will continue those discussions in the context of a formal investigation.

“Traditional statistics gathering methods are no longer sufficient to accurately measure Canada’s economy and social changes,” Mr. Arora wrote in a statement posted on the agency’s Twitter account. “It is our duty to leverage the best methods and sources to provide facts to Canadians when they need it while providing the highest level of protection of privacy and confidentiality.”

The statement described the effort as a pilot project, and said Statscan had asked the Privacy Commissioner for guidance.

“I understand the concerns that Canadians have, and want to assure them that their personal information is carefully protected, and never shared publicly,” Mr. Arora wrote.

The Conservatives dismissed those assurances, pointing out that cybersecurity breaches often occur at government departments and private companies.

He promised that Statscan’s new approach will contribute to fact-based decision-making. “We know the fundamental concern the Conservatives have really is about having policy based on evidence and not on their ideology,” he said.

At issue is the fact that companies are collecting troves of digital information on their customers – location data gathered by smartphones, transactions captured by debit and credit cards – and Statscan wants greater access to such data to improve its reports. The agency has been saying for some time that it will need to increasingly rely on such “administrative” data for its work because traditional methods, such as phone surveys, are far less effective than they once were.

However, the plan moved quickly from theoretical consultations to imminent reality in recent days, as the banking sector confirmed that it had received letters from Statscan stating that co-operation on the matter would be required as of January. Global News recently reported that the agency plans to collect “individual-level financial transactions data” and social insurance numbers in order to develop a “new institutional personal information bank.”

Canada’s banks were caught off guard.

“Banks believed this proposed data acquisition project was still in the exploratory stages and were not aware that Statistics Canada was moving to compel disclosure of this information,” the Canadian Bankers Association (CBA) said in a statement. “No customer transaction data or other personal information has been transferred to Statistics Canada under this request. The CBA is working with members to understand the nature of this request and next steps.”

“The Commissioner’s office will be seeking details regarding the information requests the agency has made to various industry sectors,” the office said.

During a two-hour briefing with reporters on Oct. 11, four senior Statscan officials outlined the agency’s “modernization” plan. They said private companies – including banks, retailers and cellphone companies – are currently gathering large volumes of data on Canadians. While some of that information is already shared with the agency so it can produce regular reports on economic growth, employment and inflation, its officials said they would be consulting with businesses on options for sharing more data.

Statscan is proposing that banks and other businesses provide the agency with raw, non-anonymized data. Statscan would then do the work of removing individual names.

The officials said they were aware that this practice raises privacy concerns but said the agency has a long history of protecting personal information and is working with Mr. Therrien on the details. 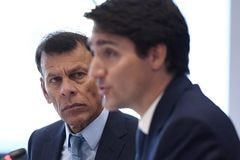