A Chinese diplomat is accusing Canadians who criticize Beijing’s new Hong Kong security law of trying to sow discord among people of Chinese origin in Canada.

Tong Xiaoling, China’s consul-general in Vancouver, told a Chinese-language radio program in Vancouver this week that pro-democracy activists in Canada who criticize the new security law enacted in Hong Kong are trying to foist their views on people who support Beijing’s move. Her interview was broadcast over Monday and Tuesday.

She said a “very few people, in both Hong Kong and local [Canada], have been maliciously denigrating and sabotaging Hong Kong’s national security legislation,” and she accused them of colluding with “anti-China forces” and trying to cause “trouble” overseas.

“Some people were trying to intimidate people who truly care about Hong Kong, stop them from voicing [their opinions] and launch personal attacks on them. [They] also try to create divisions in the ethnically Chinese community and sabotage China-Canada relations,” Ms. Tong said to Vancouver radio station 1320 AM, which bills itself as the “voice of Vancouver’s Chinese community.”

Ms. Tong proceeded to list various members of the Chinese community in Vancouver: those from Hong Kong, from Macau, from mainland China and the self-governing island of Taiwan.

Canadian activists for democracy in Hong Kong say that’s an unusual thing for a foreign government official to be concerned about. It’s not the Chinese government’s business to be actively concerned with the opinion of Canadians of Chinese origin, they say.

The Beijing-drafted national security law punishes what China broadly defines as subversion, secession, terrorism and collusion with foreign forces with up to life in prison. Critics of the law fear it will crush the wide-ranging freedoms promised to the territory when it returned to Chinese rule in 1997, including the right to protest and an independent legal system. Supporters of the law say it will bring stability after last year’s often-violent anti-government and anti-China unrest.

Vancouver has been home to a number of rallies against the new national security law Beijing imposed on Hong Kong, including demonstrations outside Oakridge Centre and the local Chinese consulate.

Cherie Wong, executive director for Alliance Canada Hong Kong, an umbrella group for Hong Kong pro-democracy advocates in this country, said the Chinese government acts as though it has a proprietary claim on people of Chinese origin in Canada.

“Why would a foreign diplomat care about what the Chinese Canadian community thinks? It’s because the Chinese Communist Party feels a level of ownership over ethnically Chinese individuals,” Ms. Wong said.

“The accusation that we are dividing Chinese people is in fact reinforcing the idea that we are a monolith, which is very much incorrect. It’s part of the same propaganda, erasing the differences in political opinions.”

Guy Saint-Jacques, a former Canadian ambassador to Beijing, said that in his opinion the Chinese government devotes a lot of resources to try to shape the opinions of ethnically Chinese communities in foreign countries in the hope of influencing public policy. “The message is repeated all the time: Don’t forget the Motherland.”

He said Ms. Tong’s comments reflect a more assertive brand of Chinese foreign policy. “She should be reminded that Canadians are Canadians: We don’t make a distinction between Canadians of Chinese origin and Canadians of British origin.”

Members of the House of Common’s special Canada-China committee, meanwhile, are meeting this week to consider holding hearings on the new Hong Kong security law.

Ms. Tong told 1320 AM that the national security bill was designed to bring calm to Hong Kong. Mass protests began in mid-2019 over proposed legislative changes that would have allowed extraditions to mainland China. This civil disobedience later evolved into demands for greater democracy and autonomy.

She blamed foreign governments and even the self-ruled island of Taiwan for encouraging this disobedience.

She also said she understands some overseas Chinese people have expressed concerns over the new law, worrying that it will violate Hong Kong people’s rights and freedoms, but blamed biased media reports and foreign politicians for their concerns.

She said the law will target only a tiny minority of people who sabotage Hong Kong’s prosperity and stability and the national security.

“If you do not break such law, and aren’t involved in these activities, why do you need to worry about your safety?”

Vancouver hate incidents against East Asians up sevenfold compared to 2019 due to cases related to COVID-19
May 23, 2020

Opinion
China’s coronavirus outbreak calls out for Canada’s help – and we should respond, in the spirit of Dr. Bethune
March 11, 2020 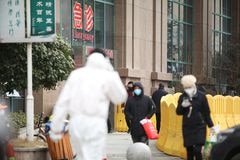 Protests sow division among Vancouverites whose roots are either in Hong Kong or Mainland China
September 27, 2019 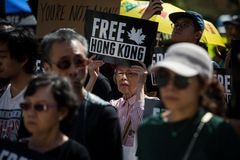 Follow Steven Chase and Xiao Xu on Twitter @stevenchase @xiaoxuyvr
Report an error Editorial code of conduct
Due to technical reasons, we have temporarily removed commenting from our articles. We hope to have this fixed soon. Thank you for your patience. If you are looking to give feedback on our new site, please send it along to feedback@globeandmail.com. If you want to write a letter to the editor, please forward to letters@globeandmail.com.
Comments