China’s embassy in Ottawa shot back at accusations it’s conducting closed-door trials of two Canadians on trumped-up charges, even as it denied Canada’s diplomats the right to attend court hearings for Michael Spavor.

And, while it denies there is any connection, Beijing’s diplomatic mission once again linked the ongoing incarceration of Mr. Spavor and former diplomat Michael Kovrig to the fate of Chinese tech executive Meng Wanzhou, who was arrested at the Vancouver airport by the RCMP in 2018 on behalf of a U.S. extradition request.

On Friday a Chinese court conducted a secret trial for Mr. Spavor in two hours, a judicial hearing on charges punishable by life in prison that was completed by lunchtime. It concluded without the issuance of a verdict or sentencing, which in the Chinese system can be delayed for years.

The embassy called criticism of its conduct toward Mr. Spavor and Mr. Kovrig by Canadian Foreign Minister Marc Garneau “unwarranted comments” that are “fact distorting.”

China has charged Mr. Spavor and Mr. Kovrig with spying. Prime Minster Justin Trudeau has accused Beijing of concocting these charges in retaliation for Canada’s arrest of Ms. Meng in December 2018. (The two men were arrested days later).

And Mr. Garneau this week decried how China has failed to even provide details of the allegations against the Michaels. Canada was barred from attending the Spavor trial in violation of the Vienna convention on consular relations, and a pact between Canada and China.

“We believe these detentions are arbitrary, and remain deeply troubled by the lack of transparency surrounding these proceedings,” Mr. Garneau said earlier this week.

The Chinese embassy said that contrary to what Canada has suggested, “China is a country of the rule of law” and that “China’s judicial authorities have been dealing with the cases independently and ensuring their lawful rights.”

It linked the cases to that of Ms. Meng: “When it comes to arbitrary detention, Ms. Meng Wanzhou has been arbitrarily detained for over two years despite the fact that she hasn’t violated any Canadian law. This is arbitrary detention in every sense of the term.”

The embassy accused Canada of making “irresponsible remarks” and urged “Canada to immediately correct its mistakes and release Meng Wanzhou and ensure her safe return to China.”

Mr. Trudeau on Friday morning criticized the Chinese government for trying the Canadians behind closed doors without allowing Canada access to the court or evidence to support Beijing’s allegations he is a spy.

Asked to comment on the Chinese embassy’s outburst, Mr. Trudeau replied: “Canada is a country of the rule of law.”

Mr. Trudeau, who has previously accused China of concocting “trumped-up charges,” decried the fact Canada has been kept in the dark about the men’s cases.

The charge d’affaires at Canada’s embassy in Beijing was denied entry to the courtroom where Mr. Spavor was tried.

“This is happening in a very non-transparent way,” the Prime Minister said of the trial process.

“One of the challenges around the lack of transparency on that process is it becomes extremely difficult to make judgments around whether or not the trial was fair.”

The Canadian government is looking to U.S. President Joe Biden to take steps that result in freedom for the two Michaels given that it was the U.S. extradition request for Ms. Meng that apparently landed them in Chinese jails.

Ottawa is hoping an attempted reset of U.S.-China relations – after years of erosion under president Donald Trump – will open the door for the release of the two Canadians. The Biden administration has made clear that it intends to push Beijing over its treatment of U.S. allies and human-rights violations.

Mr. Trudeau was asked Friday whether he knows if the U.S. had raised or planned to raise the plight of the Michaels at the Anchorage meeting.

The Prime Minister did not answer the question but thanked the U.S. and other allies for sending diplomats to Dandong to express solidarity with Canada on Mr. Spavor’s case.

“We were very pleased to see among the diplomats who showed up at the hearing in Dandong that a number of our allied countries including the United States were represented to express our solidarity, our global solidarity in this case. I can assure you that the United States continues to prioritize this case as it is something that is important not just to us but to them in terms of respect for the rule of law and support of citizens from around the world.” 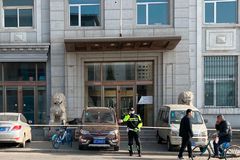