Ms. Freeland told the House of Commons on Monday she was “well aware of the character of Communist authoritarian regimes” as she chided Chinese Ambassador Cong Peiwu for overstepping his diplomatic role.

However, she sidestepped calls from the official opposition to expel the diplomat.

“Let me say the recent comments by the Chinese ambassador are not in any way in keeping with the spirit of appropriate diplomatic relations between two countries,” she said in response to questions from Conservative Leader Erin O’Toole.

Canada-China relations took another blow last Thursday, when Mr. Cong warned Ottawa against granting asylum to pro-democracy dissidents from Hong Kong, saying such action could jeopardize the “health and safety” of 300,000 Canadians living in the former British colony. He also warned of a “strong reaction” from Beijing if the Canadian Parliament condemned ethnic cleansing of Muslim Uyghurs in China’s Xinjiang province.

The ambassador was called in to Global Affairs the same day for a reprimand, and Prime Minister Justin Trudeau said on Friday the Canadian government would not be silenced by Chinese threats. Earlier in the week, he had accused China of engaging in “coercive diplomacy."

“It is totally legitimate and indisputable for the Chinese ambassador to Canada to express China’s position in response to questions on China-Canada relations as well as matters related to Hong Kong and Xinjiang during a recent press interview,” Foreign Ministry spokesman Zhao Lijian told reporters at a daily briefing.

Mr. Zhao accused Canadian media of deliberately misinterpreting the envoy’s remarks, and said Canadian leaders “condoned and echoed the anti-China voices in their country and wantonly made accusations against China."

“We express strong dissatisfaction and firm opposition to it and have lodged solemn complaints with the Canadian side,” Mr. Zhao said.

In the House of Commons, Mr. O’Toole said China’s ambassador not only threatened Canadians in Hong Kong, but also the Canadian Parliament if it passed a resolution condemning Beijing’s persecution of the Uyghur minority.

As an ex-journalist who worked in the former Soviet Union, Ms. Freeland said she knows how communist regimes behave and stressed that Canada would not be bullied to stop speaking up in defence of China’s Uyghurs. At least one million are being held in so-called re-education camps. Associated Press reported in June that Beijing subjects Uyghur and ethnic minority women to pregnancy checks, and forces birth control, sterilization and even abortion on hundreds of thousands.

“Let me also be clear that when it comes to the treatment of the Uyghurs, an ethnic Muslim minority, which has been persecuted, Canada will always speak out clearly and without any reservation," Ms. Freeland said. “That is why we have been steadfast in defending the protests in Hong Kong and the 300,000 Canadians who live there.”

He said it was an example of the aggressive “wolf warrior” diplomacy approach increasingly favoured by Chinese government envoys.

“It was at minimum an implicit threat,” Mr. Saint-Jacques said. “As a diplomat, you are supposed to master the language and be very careful about what you say.”

Mr. Saint-Jacques said it would be bad timing for Canada to expel him, however, particularly with Beijing’s continued detention of Canadians Michael Kovrig and Michael Spavor, which has been widely condemned as “hostage diplomacy.”

“You expel an ambassador when you are going to war or in very serious matters as a last resort.”

The Chinese would probably expel Canadian ambassador Dominic Barton in return, Mr. Saint-Jacques said, and reduce the ability of the two countries to communicate.

After Ms. Freeland made her remarks, the Chinese embassy in Ottawa tweeted an unsigned column from state-controlled China Global Television Network that argued the ambassador had not threatened Canadians in Hong Kong but was merely making the point that their health and safety would be at risk if residents do not abide by a national-security law. Beijing imposed the law in June, and it has been used to criminalize speech and arrest democracy advocates.

“The remarks state very clearly that the ambassador believes that the National Security Law, and subsequently, stability in the city, will be in the best interests of individuals and companies from Canada, and how exactly is he wrong,” CGTN said. “Is the city being a perpetual state of violence and political unrest in the ‘true’ interests of the people?”

Opinion
Europe is locking down again, virtually guaranteeing a new recession. It didn’t have to be this way
Subscriber content
October 19, 2020 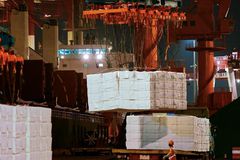