A huge state-owned shipyard in China is building a 1,000-passenger ferry for use by a federal Crown corporation over the objections of Canada’s shipbuilding industry and at a time when two Canadians have spent 989 days in Chinese prisons as victims of what Ottawa has called “hostage diplomacy.”

The Crown corporation has an option to buy the vessel from Stena North Sea at the end of the five-year charter. The ferry will operate between Nova Scotia and Newfoundland and Labrador.

The heavily subsidized CMI has also scooped other Canadian business. CMI’s Jinling Shipyard recently won a $20-million contract to supply the Northwest Territories with four double-hulled barges. Most of the bill was paid by the federal government.

Colin Cooke, president of the Canadian Marine Industries and Shipbuilding Association, said he finds it “very difficult to stomach” that the federal contract was approved when Canadians Michael Spavor and Michael Kovrig are incarcerated in China. They have spent 989 days in Chinese prisons with the lights on 24 hours a day.

Verdict against Michael Spavor gives some hope for future release, but also shows Canada’s powerlessness in the face of injustice

China arrested the two men in December, 2018, shortly after Meng Wanzhou, chief financial officer of Huawei Technologies Co. Ltd., was detained in Canada on a U.S. extradition warrant over allegations of bank fraud relating to violations of U.S. sanctions against Iran. Canada has accused Beijing of hostage diplomacy.

Mr. Cooke also questioned whether Marine Atlantic’s competitive procurement process was fair, because Stena North Sea can take advantage of China’s heavily subsidized shipping industry to reduce expenses. He said a cost-effective solution could have been found to build the ferry in Canada.

“The vessels could be built stem to stern by Canadian facilities, by Canadian workers for Canadian use,” Mr. Cooke said. “We have the design know-how. We’ve got the components manufacturing and we have the yards.”

The only part of the ferry that would have to be purchased outside Canada would be the engines, although Mr. Cooke said they could come from the United States, Europe and Japan.

Tara Laing, a spokesperson for Marine Atlantic, said the ferry contract was open to domestic and international bidders and was overseen by an independent fairness monitor. Ms. Laing said the fact that a Chinese state-owned conglomerate would build the ship was not a factor in the Crown corporation’s decision.

“The ownership of the shipyard selected by Stena was not considered within the procurement process,” Ms. Laing said in an e-mailed statement.

The Trudeau government said this year it has changed how it deals with China because of Beijing’s more assertive authoritarianism and coercive diplomacy.

“China of 2021 isn’t the same China of 2016, and Canada’s approach needs to evolve with an evolving China,” Foreign Affairs Minister Marc Garneau told a Parliamentary committee in June.

Conservative foreign affairs critic Michael Chong accused the Liberals of taking a “business as usual” approach to the Chinese government despite the increasing challenge Beijing represents to Canadian values and interests.

“It’s unbelievable that the federal government would contract directly or indirectly with a Chinese shipbuilder given the deteriorating relationship,” Mr. Chong said. “And secondly, it’s unacceptable, given how China is unfairly competing in global shipping through subsidies.”

Alex Vicefield, the chairman and chief executive officer of Inocea Group, which owns Davie Shipyard in Quebec City, argued there was no reason to have the passenger ferry built outside Canada.

“In fact, the construction of this ferry would be simpler than all the major programs which Davie has undertaken over the past nine years,” he said. “Obviously, the same goes for the barges, too, which are very basic structures.”

CMI is one of several Chinese state-owned companies that are increasingly dominant in the global shipping industry. China controls the world’s second-largest shipping fleet by gross tonnes, and has constructed more than one-third of the world’s vessels.

The Center for Strategic and International Studies says China has funnelled US$132-billion of financial support into its shipping and shipbuilding sector between 2010 and 2018. Chinese President Xi Jinping’s “Made in China 2025” strategic plan to further develop the country’s manufacturing industry designates maritime equipment and high-tech vessel manufacturing as one of 10 priority sectors.

“Why would we want to give them business when there are lots of other companies and lots of other countries that we have much better relationships with,” said retired Royal Canadian Navy vice-admiral Mark Norman. “We should try harder to keep this kind of work in Canada.”

Mr. Norman, a former vice-chief of the defence staff, said it’s disturbing that Marine Atlantic appeared not to consider the cases of Michael Spavor and Michael Kovrig and Beijing’s increasing belligerence.

Meng Wanzhou’s extradition case: Everything you need to know as hearing ends with reserved decision
August 19, 2021 Meng’s lawyers say fraud case unlike any other in Canadian legal history
August 16, 2021 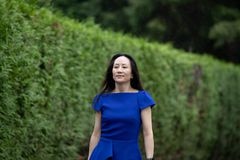 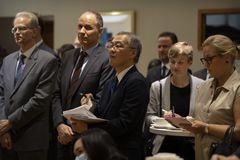