Jean Chrétien is floating the idea of having Canada’s Justice Minister exercise his legal authority to stop the U.S. extradition of senior Huawei executive Meng Wanzhou as the means to normalize diplomatic relations with China, sources say.

The former Liberal prime minister, who last week offered to serve as Canada’s special envoy to China to help free two jailed Canadians, has discussed the idea of cancelling the extradition process with business executives, according to sources with knowledge of the conversations.

The sources who spoke to The Globe and Mail were granted anonymity so they could speak about private conversations.

The proposal – which has not been formally presented to the Trudeau government – would meet Chinese President Xi Jinping’s demand that Ms. Meng be freed to return home before Beijing would reconsider reprisals it has taken against Canada.

Sources say Mr. Chrétien and Mr. Goldenberg have pointed out in discussions that the law states the Justice Minister can end an extradition process. The Extradition Act says the minister “may at any time withdraw the authority to proceed” with an extradition request and “and if the minister does so, the court shall discharge and set aside any order made respecting their judicial interim release or detention.”

Bruce Hartley, a spokesman for Mr. Chrétien, did not immediately respond to a request for comment. Mr. Goldenberg declined to comment.

A senior government official who was not authorized to speak publicly about the matter would say only that it is not helpful to discuss options the government may be reviewing to end the standoff with China.

On Monday, Mr. Trudeau was asked whether he was prepared to enlist Mr. Chrétien.

“We are always open to looking at different ways of doing things ... " Mr. Trudeau told reporters. “In regards to prime minister Chrétien, I was happy to sit down with him just a few weeks ago to talk at length about the situation with China and get his advice.”

The Chinese embassy declined to comment on whether Beijing might welcome Mr. Chrétien as a special envoy, with a spokesman saying the Trudeau government has not indicated whether it would embrace this proposal.

In December, Canada arrested Ms. Meng, the daughter of Ren Zhengfei, founder of the telecommunications company Huawei Technologies Co. Ltd., at the request of U.S. authorities on allegations of fraud relating to sanctions against Iran. Legal experts have said the matter could drag on for years if a Canadian court rules in favour of extradition and Ms. Meng appeals.

Soon after, China arrested Canadians Michael Spavor and Michael Kovrig on allegations they had violated national security, and imposed trade restrictions on Canadian canola, pork, beef and other farm products. Since December, two other Canadians in China have been sentenced to death.

The sources said that Mr. Chrétien, who was the architect of the China-Canada relationship after the rupture caused by the Tiananmen Square massacre of 1989, appears to be testing support for a possible solution to the Meng case.

Canada and China aren’t talking at senior levels. Foreign Affairs Minister Chrystia Freeland has asked her Chinese counterpart, Wang Yi, to hold high-level talks, but he has refused to take her phone calls. CBC News reported on Wednesday that Beijing ignored an attempt by Mr. Trudeau earlier this year to arrange a conversation with China’s Premier in an attempt intervene on behalf of Mr. Spavor and Mr. Kovrig.

Former prime minister Brian Mulroney and the Conservative Party have called on Mr. Trudeau to name Mr. Chrétien as a special envoy, citing his past ties to Chinese leaders.

Mr. Chrétien has said privately that the United States played a trick on Canada by forcing Ottawa to arrest Ms. Meng, and called the extradition request an unacceptable move by the United States at the expense of Canada and its farmers and pork producers. He has also privately said he doesn’t think Canada should pay the price for the Meng arrest.

Prof. Jiang, an expert on China who discussed with Mr. Goldenberg his proposal to have the Justice Minister end the Meng extradition, said Chinese authorities have carefully read the extradition law and know it is possible.

Prof. Jiang said if Mr. Chrétien is dispatched to China, the Chinese would expect nothing less than Ms. Meng’s release.

“From the Chinese viewpoint, there is really no room to negotiate. There is no negotiation. They view Meng Wanzhou’s arrest as a hostage-taking on behalf of the Americans,” he said. “On the Canadian side, we want to stop the bleeding right way, we want the two Michaels sent home and we want trade sanctions and related punishment to stop.”

Prof. Jiang said he recently travelled to China, including to Huawei’s headquarters in Shenzhen, with UBC colleague Paul Evans. Chinese officials were interested that Mr. Chrétien, who is respected by Chinese leaders, might be prepared to act as an envoy, but that in itself will not improve diplomatic relations, he said.

“They say: ‘What is the package? You can send anyone you want, but what is the deal?’ ” Prof. Jiang said.

However, Canada’s former ambassador to China, Guy Saint-Jacques, said it would be a mistake for the Canadian government to endorse such a proposal, particularly since Mr. Trudeau and Ms. Freeland have said the courts should deal with the issue.

“The opposition would jump on that and pillory the government,” he said.

The former diplomat said that what might be even more worrisome would be Donald Trump’s reaction, even though the U.S. President has speculated that Ms. Meng could be a pawn in China-U.S. trade talks.

“If the government were to go through all this process and gave a mandate to Mr. Chrétien and he goes there and gets all the glory and Ms. Meng is free, well, it would give the impression that the Prime Minister is inexperienced and a neophyte – and good old Mr. Chrétien is a reliable fixer,” he said. 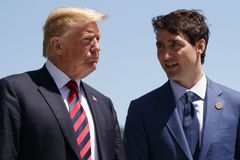