In a normal year when the train is running, the Home Hardware in Churchill ships about 150 crates of building products to communities in the Eastern Arctic.

Last year, after a flood washed away parts of the rail line that was the only land route between the Manitoba town and the city of Winnipeg, it shipped seven. And this year will be not much better.

Not only are supplies not reaching the community of 900, store owner Dale De Muelles says people in Nunavut assume he has no inventory because the train is out of service, so they have gone elsewhere to buy their construction materials.

Mr. De Muelles said he used to employ 10 people during the summer months. “Today, we are operating with me, my wife and her friend and one guy in the yard," he said. "If they don’t give us a train this year, I am close to locking doors.”

The Canadian Transportation Agency (CTA) is pressuring Omnitrax Inc., the U.S. company that owns the railway, to do the necessary repairs. But the anxiety, the job losses and the price of living in a community where a four-litre jug of milk costs $13, have become more than many people are willing to bear.

Joe Stover, a Churchill resident, has said goodbye to a number of friends who moved south.

“They have families to feed and there was, at least for them, just too much uncertainty to be worth staying in town while they didn’t have any work,” Mr. Stover said in a recent telephone interview.

As for those who have remained, he said, “people are trying to figure out what they’re going to do with themselves. Are they going to stick it out and pay higher prices for everything, wondering if they are going to be able to get a job once the railway comes back?”

Niki Ashton, the MP for Churchill-Keewatinook Aski, held a town hall meeting in Churchill in early July, on the same day an agreement to restore the rail service collapsed.

“People were angry. There was banging on the table and they were so hurt,” Ms. Ashton said. “It’s devastating to see. Churchill is a treasure,” she said. “What’s being done to it right now is breaking it, and people talk about the town dying.”

At the centre of the rail issue is a dispute between OmniTrax and the federal government over whether the Denver-based company must pay for the work required to get regular train service back to Churchill.

The railway was constructed in the 1930s and operated for decades as a Crown corporation. It was sold in 1997 to the Hudson Bay Railway Co., a Canadian subsidiary of OmniTrax, along with the port and some fuel depots.

But the dismantling of the Canadian Wheat Board in 2011 reduced incentives to ship wheat through Churchill, so Omnitrax shut the port in 2016. Then, in the spring of 2017, a devastating flood washed out the track in 19 different spots and caused serious damage to bridges and culverts.

Omnitrax says it does not have the money to do the repairs which, it says, will cost between $40-million and $60-million.

The federal government, on the other hand, says it signed a deal in 2008 which gave the company $18.8-million in return for a promise to keep the rail line in service until 2029. It sued the Hudson’s Bay Railway Co,. saying it had not met its contractual obligations.

That suit was put on hold in May when the government announced an agreement in principle between Omnitrax and a consortium that included Missinippi Rail Partners, AGT Food and Ingredients Inc. and Fairfax Financial Holdings Ltd. to buy and restore the rail service and to transfer ownership of the port.

But on July 3, OmniTrax said the discussions with Missinippi, AGT and Fairfax had “fallen apart and that a sale of the HBR to this group may not be possible.”

In the meantime, the CTA ruled in June that Omnitrax was obligated to fix the rail line and ordered significant work to begin by July 3. Omnitrax responded by saying it has asked for an analysis of what is required for the reconstruction but it cannot meet the CTA’s timelines.

The CTA then filed its judgment in Federal Court, which means that if Omnitrax does not respect the agency’s decision, it can be found in contempt of court and could face significant fines or even the imprisonment of key officials. Omnitrax has appealed.

Federal officials, meanwhile, say negotiations to sell the track are going on behind the scenes and the government is hopeful that a deal will happen.

But the people of Churchill are left in flux – as are the other communities on the line.

Betsy Kennedy, the chief of War Lake First Nation at Ilford, Man., said the railway problems have made it impossible to get groceries on a regular basis. And when her people have doctor’s appointments in Thompson, Man. or Winnipeg, they are gone for days until they can get transportation back home. 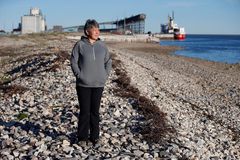 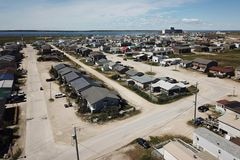