The Conservatives forced more than 20 hours of non-stop voting in the House of Commons to punish the Liberal government’s refusal to call Justin Trudeau’s national security adviser to appear at a public committee about the Prime Minister’s India trip.

The procedural standoff, which ended Friday after an all-night voting session, came after Liberal MPs defeated a Conservative motion that called for Mr. Trudeau’s national security adviser Daniel Jean to appear at the public safety and national security committee before the end of the month.

The Official Opposition filed more than 250 other motions related to the budget to prompt the marathon voting, which lasted from Thursday evening until mid-afternoon on Friday, when the Tories finally pulled the plug citing the fatigue of MPs and staff. The votes could have potentially lasted until Saturday morning.

Bleary-eyed MPs spent the night stuck in their seats, some watching Netflix, reading books and taking short power naps in order to pass the time. The Liberals had to keep a majority of their MPs in the chamber, because the confidence votes related to budgetary matters could have triggered an election if they were not passed.

Conservative House leader Candice Bergen justified the procedural tricks by saying there are few tools available for opposition MPs in a majority government. She said her party won’t give up on seeking answers as to why Mr. Jean was barred from briefing MPs and the public about Mr. Trudeau’s India trip.

“We’ve been able to bring this not only to light, but also realize to what extent the Prime Minister is willing to cover it up,” Ms. Bergen told reporters.

But Liberal House leader Bardish Chagger said it was entirely up to MPs on the national security committee — the majority of whom are Liberals — to decide whether Mr. Jean should be called to testify, and they said no.

“The committee should be able to choose if they would like him to come and testify or not,” said Ms. Chagger. “And that’s a choice for committee members to make.”

The Conservative motion asked that Mr. Jean provide the same briefing to committee members that he gave to journalists last month, when he suggested factions within the Indian government may have orchestrated the presence of Jaspal Atwal, who was convicted of attempting to murder a visiting Indian politician on Vancouver Island in 1986, at official events to embarrass the Prime Minister.

B.C. Liberal MP Randeep Sarai initially took responsibility for inviting Mr. Atwal to events in India, leading the Conservatives to question how both scenarios could be true.

There were also questions raised on Friday about whether Conservative leader Andrew Scheer had been offered a briefing on the Atwal affair from the Clerk of the Privy Council, Michael Wernick.

A spokesman for the Privy Council Office said, “that the Government of Canada did offer a briefing on India to Mr. [Scheer].”

Speaking to reporters in Toronto after a meeting with Mayor John Tory, Mr. Scheer said the Prime Minister’s Office had indicated to him that officials were seeking legal advice on whether such a briefing could be arranged.

“Our indication was that the Prime Minister’s Office was checking with their legal counsel to see if it would be possible. And they were going to get back to us. From there, they are now spinning this out,” Mr. Scheer said. “It’s completely false.”

Mr. Trudeau arrived in the House early Friday after his plane was delayed in returning from New Brunswick the night before due to a snowstorm. The voting in the House derailed the day’s legislative agenda, which included the government’s new federal firearms bill. “I’d rather be debating gun legislation that’s going to keep Canadians safe,” Mr. Trudeau said as he left the Commons. He stayed silent when asked why Mr. Jean wasn’t allowed to testify at committee. 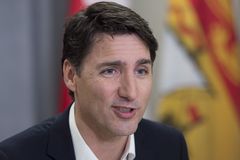