The Conservative Party debate over Leader Andrew Scheer’s future is being aired publicly, with deputy leader Lisa Raitt saying Wednesday that he “deserves another shot” at fighting an election.

She emphasized that a Liberal minority government, which requires opposition support to stay in office, is not the time for Conservatives to start "focusing inwardly.”

Asked what she would say to Conservative supporters who want party heavyweights such as Peter MacKay or Rona Ambrose to take the helm, Ms. Raitt replied: “I would say that neither of them are sitting in the House of Commons and right now our focus should be holding this Liberal government to account.”

Ms. Raitt, who lost her Toronto-area seat of Milton in Monday’s election, said the party should instead overhaul its platform to improve its appeal to vote-rich provinces such as Ontario, where the Conservatives barely raised their seat count. She conceded that the Conservatives also failed to achieve what it had hoped for in Nova Scotia.

“Maybe it’s more of taking a look at the issues that matter to Ontarians and trying to create a platform that speaks to them. Clearly there wasn’t enough in our platform that caused them to want to cast a ballot for us," Ms. Raitt said.

“I think it’s an urbanization issue. We’ve got to do better in terms of speaking to urban areas.”

Conservative Marilyn Gladu, who was re-elected in the Southern Ontario riding of Sarnia-Lambton, and was an early backer of Mr. Scheer’s leadership, said she continues to support him.

But she said his fate will be up to the party’s grassroots. The Conservative Party has a national convention scheduled for April, 2020, and a secret ballot will decide whether members wish to trigger a leadership selection process.

Ms. Gladu said she expects other leadership contenders will be waiting in the wings.

Many Conservatives believed that a majority was in reach, Ms. Gladu said, citing Prime Minister Justin Trudeau’s ethical scandals and the blackface controversy that erupted during the campaign.

“If you can’t beat Justin Trudeau with those things so up front, I think that’s not great. I think we need to ask ourselves, ‘What happened in Ontario? Why did we not win the number of seats we wanted to win in the Atlantic provinces?’ ” she said.

Peter Kent, who was re-elected in the north Toronto riding of Thornhill, said the party presented a strong platform but needs a more robust environmental policy. He blamed the “Doug Ford” factor and a media “smear” against Mr. Scheer for the loss. “Ontarians weren’t convinced that the Ford government was back on track and had corrected some of the early mistakes. And I think they have," he said.

He said he will vote to support Mr. Scheer’s leadership.

Mr. Scheer on Wednesday promised a “thorough review” of the campaign and said meetings with top campaign officials have already started.

“Obviously, we’re disappointed in the results and we were expecting and hopeful for a lot more Canadians supporting our party, especially in some key areas,” he said during an online presentation.

“There’s no time to lose preparing for another election campaign, because with a minority Parliament it could be much sooner rather than later.”

Ms. Raitt said a leadership campaign would detract from keeping pressure on the minority Liberal government, which will have to seek support for budget and confidence votes or suffer defeat.

“We went through a very comprehensive leadership race two years ago. I took part in that as well,” she said.

“We came to a decision, we built our plan of execution around it and we reduced those guys to a minority, which two years ago nobody was betting was possible.”

Ms. Gladu criticized Mr. Scheer’s communications team and said his handling of questions on abortion, a target the Liberals exploited during the campaign, should have been dealt with earlier in the campaign.

Federal election 2019: From Adam van Koeverden and Jody Wilson-Raybould to Maxime Bernier and Lisa Raitt: a look at the political winners and losers
October 22, 2019 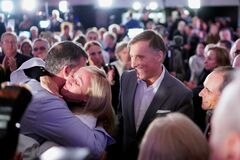 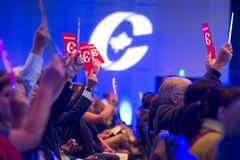 As Conservative Party deputy leader, Lisa Raitt hopes women will 'see themselves' in her
July 21, 2017
Follow Steven Chase and Laura Stone on Twitter @stevenchase @l_stone
Report an error Editorial code of conduct
Due to technical reasons, we have temporarily removed commenting from our articles. We hope to have this fixed soon. Thank you for your patience. If you are looking to give feedback on our new site, please send it along to feedback@globeandmail.com. If you want to write a letter to the editor, please forward to letters@globeandmail.com.
Comments