Conservative MPs have voted to expel failed leadership contender Derek Sloan from caucus after hours of deliberations over his future in the party.

The vote was held in an emergency meeting after it was revealed on Monday he accepted a donation from a known white supremacist. It followed other controversies involving the Ontario MP, including comments last year that questioned the Chief Public Health Officer’s allegiance to Canada and a petition he sponsored that cast aspersions on COVID-19 vaccines.

Conservative Leader Erin O’Toole said caucus expelled him not because of one event, but because of “a pattern of destructive behaviour involving multiple incidents and disrespect towards the Conservative team for over a year.”

Mr. O’Toole said “events of the past week were simply the last straw.”

Mr. Sloan issued his own statement, saying the Conservative leader “went on a warpath” to have him expelled. He said he will sit as an independent MP and represent “true conservative values and policies.”

Mr. O’Toole set the wheels in motion to oust Mr. Sloan on Monday, saying Mr. Sloan’s acceptance of a donation from a known white supremacist is “far worse than a gross error of judgment or failure of due diligence.”

Conservative members met virtually at 11:00 a.m. ET on Wednesday, and MPs had the opportunity to speak before the vote. The results of the secret-ballot vote were announced shortly after 4 p.m.

Press Progress, a website founded by the Broadbent Institute, first published news of the donation to Mr. Sloan’s leadership campaign. The $131 contribution in August came from Frederick P. Fromm, who is more well known as Paul Fromm.

Mr. Fromm lost his teaching licence in Ontario in 2007 after he attended events put on by white supremacist group Heritage Front, celebrated Adolf Hitler’s birthday and shared a stage with David Duke, a former head of the Klu Klux Klan.

Mr. Sloan told The Globe and Mail on Monday he did not know about the donation until that day. He said the party also had a responsibility to vet Mr. Fromm’s contribution because it processed the donation on his behalf and charged a 10-per-cent fee for the service. He said the party accepted Mr. Fromm’s party membership application, and that he was allowed to vote in the leadership contest.

Mr. Sloan has brought unwanted attention on the party on a number of occasions. He previously suggested that Chief Public Heath Officer Theresa Tam is a pawn for China, sponsored a petition that called COVID-19 vaccines “human experimentation” and said most children questioning their sexual or gender orientation will just “grow out of it.”

The Conservative Leader was quick to criticize Mr. Sloan this week, despite having supported him in the past. During the leadership race, Mr. O’Toole paid for an ad saying that he was a holdout in a previous attempt to oust Mr. Sloan. That came after Mr. Sloan’s call to fire Dr. Tam, asking in a video, “Does she work for Canada or for China?” Mr. O’Toole’s Facebook ad said “Erin was the only MP to speak out on Derek’s behalf.”

The decision to expel Mr. Sloan also comes after the Conservative Party launched an investigation into his use of robocalls to encourage supporters to sign up to attend the next party policy convention.

Conservative Party spokesperson Cory Hann said the party has demanded “basic, yet pertinent information from Mr. Sloan for what appears to be a violation of the CRTC rules.”

Mr. Sloan told The Globe there was one robocall that went to a small portion of his own list, and that he has been “so successful in encouraging delegates to join, that the party leadership is very scared.”

Mr. Sloan indicated in his statement after the vote that he will continue to encourage his social conservative base to push for change at the policy convention.

“No matter how callous and misguided today’s actions by Erin and my colleagues were, we have much work to do in the next two months as we prepare for the policy convention in March,” Mr. Sloan wrote.

With files from Marieke Walsh and Jill Mahoney

Opinion
Erin O’Toole moves to boot an MP nobody wants, shrugging at his hypocrisy to embrace the discipline of seeking power
Subscriber content
January 19, 2021 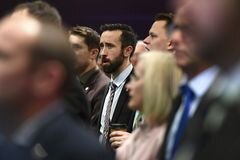 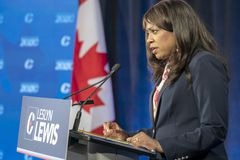 Opinion
The answer to people with anti-vaccine beliefs is to address the cause of their anger
Subscriber content
December 4, 2020 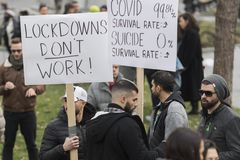