Conservative premiers are accusing Prime Minister Justin Trudeau of “moving the goalposts" on the national plan to reduce carbon emissions by demanding deeper cuts than previously set – even as some provinces chafe at the imposition of a carbon tax.

Premiers emerged from a first ministers' meeting on Friday to say there was agreement on some issues, especially the need to reduce barriers to interprovincial trade.

But Ontario Premier Doug Ford said Mr. Trudeau surprised the premiers by saying he expected some provinces to reduce emissions by more than 30 per cent over 2005 levels by 2030 – the target adopted for the country as a whole – because others, notably Alberta and Saskatchewan, cannot reach that goal.

Ontario says it has devised a plan to meet the 30-per-cent target, one that is far less ambitious than the goal set by the former Liberal government under Kathleen Wynne.

“But all of a sudden, we have a little surprise in the room, the goalposts got changed,” Mr. Ford said. “After everyone signed on to 30 per cent, some will carry more water than other provinces. That sets uncertainly within our economy, within manufacturing."

But he would not elaborate on how he believes the federal position has changed. And Mr. Moe seemed to contradict Mr. Ford by telling reporters that the last pan-Canadian agreement on climate change said each province would contribute to emissions reduction to the degree of its own capabilities.

The Trudeau government had been counting on more ambitious efforts by Ontario, Quebec and British Columbia to make up for slower progress in the two prairie provinces that rely heavily on oil and gas production and coal-fired electricity.

“We have an approach that recognizes Canada’s targets are national targets. [Mr. Ford] wants to play games with numbers. But what is clear is, we are going to move forward as we always have in a very consistent way. If anyone is moving goalposts, it’s Premier Ford,” Mr. Trudeau said.

“Mr. Trudeau said some provinces would end up doing more than the 30-per-cent target based on what is happening in their jurisdiction. Some provinces are going to achieve more than others,” Mr. McNeil said, adding Nova Scotia will probably cut emissions by 50 per cent by 2030.

Saskatchewan, Ontario and New Brunswick are going to court to challenge the constitutionality of Ottawa’s move to implement its climate-change plan by imposing a carbon tax in jurisdictions that don’t have their own broad-based emissions strategy.

Although it was predicted that political divisions and disagreements over the carbon tax would lead to tense discussions at the first ministers’ table, premiers characterized the meeting as being both amicable and productive.

But Alberta Premier Rachel Notley said she had to get her “elbows up” as she called for urgent action to mitigate the combined effects of a sharp increase in production of crude and a shortage of pipeline and rail capacity to get the oil to markets. Alberta has curtailed its production by about 325,000 barrels a day to ease what Ms. Notley describes as a “price crisis” that sees the rest of the world sell its oil at about US$50 a barrel, while Alberta earns just US$10.

“When Alberta’s oil is sold in Canada, the profit from it actually goes back to Canada,” Ms. Notley said. “So it makes sense for all of Canada to be more strategic around this.”

Ms. Notley said premiers from across Canada spoke about the importance of prosperity in Alberta and Saskatchewan, which is also heavily dependent on the oil sector, to the health of the national economy.

Quebec Premier François Legault, however, reiterated his position that opposition to any pipeline is too intense in Quebec to even consider it. “I’m not at all embarrassed to refuse dirty energy when we have clean energy,” Mr. Legault said.

Mr. Trudeau went into the meeting being able to boast about a healthy economy, with the release of numbers on Friday from Statistics Canada that showed Canada had gained 94,100 jobs in November and the unemployment rate had fallen to 5.6 per cent – a 40-year low.

Even Alberta added 24,000 jobs and saw its unemployment rate decline to 6.3 per cent, which was a drop of one percentage point.

Ms. Notley acknowledged that job growth: “But it is threatened if we don’t take charge of the situation with the discounted price in oil.”

On interprovincial trade, Manitoba Premier Brian Pallister noted the progress that has taken in place in eliminating barriers and cutting tariffs over the past two years, and that positive effort continued at Friday’s meeting.

The barriers “are antiquated; there is no reason for them to exist," Mr. Pallister said. “There is a commitment to work together and that is critical.”

Opinion
Premiers squabbled with each other more than with PM Subscriber content
December 7, 2018 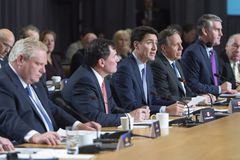 Trudeau opens first ministers' meeting, with many conflicting issues on the agenda
December 7, 2018 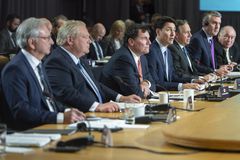 Premier Legault to press Ottawa for $300-million to cover costs of refugee influx in Quebec
December 7, 2018 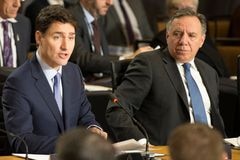 Follow Gloria Galloway and Les Perreaux on Twitter @glorgal @Perreaux
Report an error Editorial code of conduct
Due to technical reasons, we have temporarily removed commenting from our articles. We hope to have this fixed soon. Thank you for your patience. If you are looking to give feedback on our new site, please send it along to feedback@globeandmail.com. If you want to write a letter to the editor, please forward to letters@globeandmail.com.
Comments