The Official Opposition is asking one of Canada’s spy agencies to investigate former Canadian ambassador to China John McCallum for possible election interference.

The former ambassador, who was fired in January after he publicly waded into the Huawei extradition case, told a Hong Kong newspaper this week that he has warned Chinese officials that further sanctions against Canada over the arrest of Huawei executive Meng Wanzhou could help spur the election this fall of a Conservative government, which would be far less favourable to Beijing.

“Canadians expect that the upcoming election will be conducted in a free and fair manner, and that any and all incidents of foreign interference will be fully investigated, with action taken to prevent said interference. We believe Mr. McCallum’s actions, as confirmed by his own public statements, deserve the utmost scrutiny of your agency,” Ms. Raitt and Mr. Paul-Hus wrote.

They say CSIS has the authority to review this because of the intelligence service’s mandate to investigate “activities that may on reasonable grounds be suspected of constituting threats to the security of Canada.”

The South China Morning Post said Mr. McCallum had been speaking to "former contacts at China's Ministry of Foreign Affairs” in Beijing.

“Anything that is more negative against Canada will help the Conservatives, [who] are much less friendly to China than the Liberals,” Mr. McCallum told the South China Morning Post. “I hope and I don’t see any reason why things will get worse. It would be nice if things will get better between now and [Canada’s federal] election [in October].”

Mr. McCallum is a veteran Liberal Party insider who served as cabinet minister in three Liberal governments, including Mr. Trudeau’s.

Prime Minister Justin Trudeau, asked for the first time about Mr. McCallum’s comments Friday, did not denounce his former cabinet minister’s comments but instead said Foreign Affairs Minister Chrystia Freeland had already commented on the matter.

Ms. Freeland, a former cabinet colleague of Mr. McCallum’s, has denounced the ex-ambassador’s comments and spoken out against inviting foreign interference in Canada’s elections.

"Mr. McCallum does not speak for the government of Canada," Ms. Freeland told journalists at a media freedom conference in Britain Thursday.

"It is inappropriate for any Canadian to be advising any foreign government on ways it ought, or ought not, to behave to secure any particular election outcome in Canada."

The Conservatives said there is a panel of public servants charged with keeping watch for signs of foreign interference in the Canadian election. Mr. Vigneault could report to them on what CSIS has found after reviewing Mr. McCallum’s conduct.

But, the Conservatives said, this panel’s mandate is limited to events that occur within the writ period.

In December, Canada detained Ms. Meng, Huawei’s chief financial officer, at the request of U.S. authorities in relation to violations of U.S. sanctions against Iran. She is awaiting an extradition hearing scheduled for January 2020.

Mr. McCallum lost his job as ambassador earlier this year after he told news media that he believed Ms. Meng had strong legal arguments in her favour to avoid being extradited to the United States. He had also publicly speculated that U.S. President Donald Trump might intervene and cut a deal that would result in her freedom.

The former envoy also urged Canadian officials and business leaders in the South China Morning Post interview to continue to conduct visits that could expand their relationship with China, so that Canadian firms would be poised to benefit when regular bilateral ties resume. “Canada is in China for the long run ... this problem will pass,” he said. “It’s important for Canadian business people not just to come to China but to come often ... especially when the going is tough. This will put our companies in a good position to do well when the going improves.”

In late June, China also announced it was temporarily suspending all meat exports from Canada, citing the discovery of a banned substance in frozen pork from this country. The drug at issue is approved for use in Canada and the United States, but not in Europe, Russia or China. 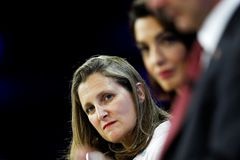