The Conservative Party will be campaigning against a ban on specific kinds of assault weapons in the next election, arguing a Liberal Party proposal to prohibit some military-style assault weapons that are currently legal would penalize law-abiding gun owners while failing to address the real cause of gun crime in Canada.

“The Liberals are playing political games on the backs of people who own firearms for sports shooting,” said Conservative MP Pierre Paul-Hus, who is the party’s public-safety critic. “They are trying to stoke public fears by importing a U.S. debate in this country.”

Mr. Paul-Hus said gun-control measures should be targeting gang members and gun smugglers, in part by increasing penalties against those who use illegal guns to commit crimes.

“It’s not by removing firearms from the hands of honest citizens that we will solve the problem,” he said.

Ahead of a federal election set for Oct. 21, the Conservatives and Liberals are once again on opposite sides of the debate over gun control, a polarizing issue that has returned to the political forefront following recent mass shootings in Canada (at a Quebec City mosque and on Toronto’s Danforth Avenue).

In an interview with The Globe and Mail last week, Bill Blair, Minister of Border Security and Organized Crime Reductions, said the Liberal Party will be campaigning on a promise to prohibit some types of military-style weapons and buy them back from their current owners.

“There are some weapons that are currently available in our society that represent an unacceptable risk,” Mr. Blair, a former Toronto police chief, said. “They have been used tragically in a number of incidents in which a large number of people have been killed, because these weapons were designed to be efficient in the taking of lives.”

There is no legal definition for assault rifles in the Criminal Code. The most commonly cited example of a military-style assault rifle, the AR-15, is classified as restricted, meaning it is subject to a central registry and can only be fired at an approved gun range.

Still, other semi-automatic, magazine-fed rifles firing identical rounds as the AR-15 can be found in the non-restricted category; they can used for hunting and have no registry requirements. There are tens of thousands of magazine-fed, semi-automatic rifles in the country and choosing which constitute military-style assault rifles will prove controversial.

The backlash to the Liberal proposal was swift on social media, with gun owners vowing to fight back against the party on the campaign trail.

“Good luck on the Liberals getting a majority to further harass us. I think [they] might be done for the next 4.5 years,” said Rod Giltaca, executive director of the Canadian Coalition for Firearm Rights.

The Liberal proposal won support from gun-control groups, who have long called for measures to limit the availability of assault weapons in Canada. Still, some veterans of the debate criticized the Liberals for moving too slowly to ban assault weapons and handguns.

“The majority of Canadians want both to be banned,” said Heidi Rathjen of Poly Remembers, a gun-control advocacy group created in remembrance of the 14 victims of the 1989 École Polytechnique massacre.

Ms. Rathjen said the government should use current laws to ban certain weapons instead of waiting for the next election to pass new gun-control legislation.

“Why are they not doing something now while they still can?” she asked.

Mr. Blair rejected the possibility of a cross-country ban on handguns, but some members of the Liberal caucus are calling on the federal government to allow individual municipalities to ban handguns on their territory.

“[Countries] where they have implemented bans on specific types of handguns and assault rifles, you have seen a corresponding decline in gun violence. That means one less innocent life lost and that is what we should be trying to achieve here,” said Liberal MP Marco Mendicino, a former Crown prosecutor who represents the riding of Eglinton-Lawrence. 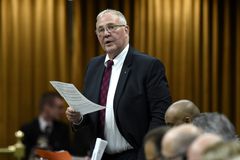 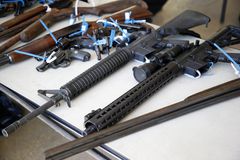 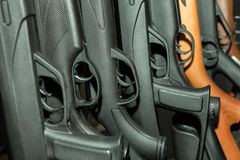