The Conservative Party is distancing itself from one of its own online ads after using Google to spread the false claim that “Justin Trudeau is letting a foreign entity take control of our borders.”

The Conservative Party ad appeared in recent weeks on Google, and following the link leads to a fundraising page on the Conservative Party’s website. That page uses slightly less inflammatory language to state that, unlike the Liberals, Conservative Leader Andrew Scheer opposes the United Nations Global Compact for Migration, which Ottawa endorsed in December.

In response to questions from The Globe and Mail about the ad, Conservative Party spokesman Cory Hann declined to defend the party’s claim that the Prime Minister is letting a foreign entity take control of Canada’s borders.

“That doesn’t accurately reflect our position, and the ad is not running,” Mr. Hann said in an e-mail.

The chief executive officer of Historica Canada, Anthony Wilson-Smith, told The Globe on Monday the organization is losing faithful donors over the mistaken belief that the Conservative ad was an official Heritage Minute. However, after the material was removed, the organization said it considered the matter “closed to our satisfaction.”

“It was never my intent to suggest anyone, anywhere should inflict real physical harm to Premier Ford. To those who took offence I’m sorry," he wrote. The Conservative Party led Monday’s Question Period by calling on the Prime Minister to fire Mr. Vaughan from his position as a parliamentary secretary.

As campaign-style rhetoric heats up before the October federal election, Conservatives and Liberals are repeatedly saying the other side is delivering low blows and spreading lies.

In a recent Facebook post, Mr. Scheer accused the Liberals of inventing lies about Conservative Party policy. Specifically, he pointed to recent comments by Immigration Minister Ahmed Hussen, who falsely claimed during a news media conference that the Conservatives want to “militarize the border” and line it with RCMP officers at every 100 metres.

"Justin Trudeau’s Liberals have done more name-calling and fear-mongering than anyone. Trudeau should stop accusing others of it until he looks in the mirror,” Mr. Scheer wrote in a Jan. 31 Facebook post.

Meanwhile, Mr. Trudeau was harsher than usual toward online giants during a question-and-answer session last month in Quebec City.

The Prime Minister said these companies generate “extraordinary profits that do not go toward the defence of our democracy by our journalists, but rather in the pockets of big companies that do not see this social responsibility as being primary for them.”

The next week, his government announced measures it promised would safeguard Canada’s elections from foreign hackers, but the move was criticized for failing to impose specific requirements on large online platforms.

The Conservative Party’s Google ad directed people to a section of the Conservative Party website focused on the party’s opposition to the UN migration compact. The website says Mr. Scheer opposes the agreement “because Canada must be in control of our borders and have full autonomy over who enters our country – not some foreign entity that cannot be held accountable by the Canadian people.”

When Canada agreed to support the UN compact in December, Mr. Scheer made similar comments that were widely dismissed as false by policy experts and former Conservative immigration minister Chris Alexander.

The compact is not legally binding on signatory countries.

“It’s disappointing that the Conservatives are trying to divide and scare Canadians with false information online,” he said in a statement.

This is not the first time the Conservative Party has backed away from one of its own online ads related to asylum seekers. In July, the party pulled an attack ad from its Twitter feed that showed a black man carrying a suitcase walking over a tweet from Mr. Trudeau.

Maker of Heritage Minutes says it is losing donors because of Conservative parody
February 4, 2019 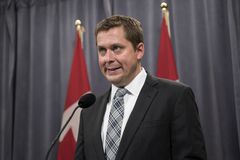 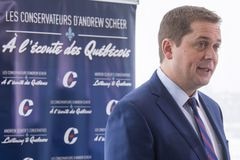