It is just a one-gram amphibian, but a judge’s decision to allow the federal government to protect the western chorus frog on private land could restrict development projects across Canada in cases where species face extinction.

Justice René LeBlanc of the Federal Court said in a recent decision that Ottawa has the power to criminalize threats posed to the frog, and other species deemed to be at risk, anywhere in the country, and even when provinces disagree.

It is the first time since Canada’s Species At Risk Act (SARA) was adopted in 2002 that it has been used to halt development on private property, and only the second protection order issued under the act. The first was to protect the sage grouse on Crown lands in the prairies.

In laying out the reasons for his decision, Justice LeBlanc said the courts have not hesitated to recognize that human responsibility for the protection of the environment is a “fundamental societal value,” and that criminal law must be able to adapt accordingly.

That responsibility does not stop with the prevention of the release of toxic substances into lands and waters, he wrote. “It is also nowadays to counter – because it impoverishes the environment – the loss of biodiversity from human activity.”

The developer that owns the site had taken the government to court, arguing the protection order amounted to expropriation without compensation.

Environmentalists rejoiced at the decision.

“It’s crucial because it means that the government can keep on doing those emergency protection orders on private lands,” said Anne-Julie Asselin, a member of the board of the Centre québécois du droit de l’environnement (CQDE), an environmental advocacy group. In Canada, Ms. Asselin said, most of the lands where species are at risk are near human habitation and, as a result, are privately held.

Alain Branchaud, executive director of the Canadian Parks and Wilderness Society in Quebec, said the decision will be a “pillar” for the future interpretation of the act. The judgment is quite clear that the federal government has the authority to step in when there are gaps in species protection, Mr. Branchaud said.

Alain Chevrier, a lawyer for the development company Candiac House Group, which owns the land, said his clients will appeal the decision.

“We’re not in agreement with any of the motivation behind this judgment,” Mr. Chevrier said.

It goes against previous court decisions, he said. And “we’re not in agreement with the fact that [the judge] said that it is needed in order to correct a bad situation. We’ve got to keep in mind that my client was authorized by the environment minister in Quebec to do this project.”

The western chorus frog is a minuscule creature measuring 2.5 centimetres from nose to back end. It was listed as threatened under the SARA in 2010, when 90 per cent of its historical range in Southern Ontario and Southwestern Quebec had been lost to environmental degradation.

Among its last remaining viable habitats was a stretch of land in La Prairie, Que., a suburb of Montreal on the south shore of the St. Lawrence River. But part of that land, owned by Candiac, was to be developed into a 1,200-unit housing project.

In 2016, in response to years of protests from the CQDE and Nature Quebec, federal Environment Minister Catherine McKenna used the SARA to issue a protection order covering two square kilometres within La Prairie that are considered crucial to the chorus frog’s survival. At the same time, the government said no compensation would be paid to the owners of the land.

That meant it would be a criminal offence to develop in the area, and the housing project had to be scaled back by 171 units.

The Quebec government, which had supported the development, accused Ottawa of “breaking the spirit of collaboration” between government departments and the real estate developers behind the project. The province said it already had a deal to protect 83 per cent of the area covered by the protection order, and that Ottawa might be intruding on Quebec’s constitutionally recognized jurisdiction.

The mayor of La Prairie told the local newspaper that cutting the housing project by 171 homes would reduce municipal revenue by $30-million over 20 years.

When the SARA was adopted, it was expected that regulations would be written to lay out the compensation terms for private land that was put under protection. That has not happened.

The company had argued the order should not be made in the absence of those regulations. But Justice LeBlanc ruled that the compensation mechanism does not need to be in place for the protection order to apply. 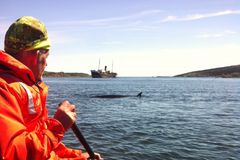