Extremely rare cases of blood clots are hampering the rollout of two COVID-19 vaccines that Canada has purchased, as the country recorded its first case of the side effect from the AstraZeneca injection and the U.S. suspended use of the Johnson & Johnson version.

On Tuesday, the United States temporarily stopped its use of the Johnson & Johnson vaccine while it investigates reports of a rare and severe type of blood clot in individuals who received the single-dose shot. Similar blood clots have also been reported after the use of the Oxford-AstraZeneca vaccine. Both shots use the same vaccine technology, called adenovirus vector.

Citing the U.S. cases, Johnson & Johnson said Tuesday it would “proactively delay the rollout of our vaccine in Europe.” The statement did not mention Canada and the company’s local spokesperson did not provide additional comment. Prime Minister Justin Trudeau said Canada is “still on track” to receive its first shipment this month.

Canada reported on Tuesday its first case of the rare blood clot, which presents in combination with low platelet levels. Health Canada said the Quebec woman is recovering and she had received the version of the AstraZeneca vaccine that is made in India and sold under the name Covishield.

Canada has contracts with eight vaccine manufacturers, but those with Pfizer-BioNTech and Moderna make up the backbone of the country’s vaccination program.

Canada has not yet secured deliveries through its main contract for 20 million shots from AstraZeneca and in the interim has struck side deals to get some shots earlier. The federal government has not yet said how many of the 10 million doses from Johnson & Johnson will arrive in the first April shipment.

Cases of blood clots were first reported in Europe among people who received the AstraZeneca shot made there. A lab at McMaster University in Hamilton is the only facility able to test for the vaccine-induced clots in Canada, Ishac Nazy, the lab’s director said. It has received about 10 samples so far, some of which were still undergoing testing on Tuesday.

Because the blood clots have primarily been reported in women under 55, Canadian health officials have advised that the vaccine only be given to people who are 55 and older. Prior to March 29, people under 55 also received the shot. Canadian health officials would not say on Tuesday when the woman received the vaccine and declined to disclose her age. Health Canada described it as a “very rare adverse event.”

Canada’s federal regulator said the incident will be part of its safety review of the vaccine. Health Canada also said it has asked Johnson & Johnson for data regarding “any cases of these rare blood clotting events” which were first reported in the United States.

Health Canada has already approved the vaccine but none has been administered in Canada.

“We’re following closely developments in the United States and we can assure everyone that Health Canada will, every step of the way, put the health of Canadians first and foremost,” Mr. Trudeau said.

In a joint statement, the U.S. Centers for Disease Control and the Food and Drug Administration said six cases were reported in women between the ages of 18 and 48 out of the 6.8 million Johnson & Johnson shots that have been administered.

“I’d like to stress these events appear to be extremely rare. However COVID-19 vaccine safety is a top priority,” FDA Acting Commissioner Janet Woodcock said at a news conference Tuesday.

Canada is in the midst of its worst surge yet of COVID-19. On Tuesday, the country recorded 7,550 new cases and in the past seven days case counts increased 30 per cent.

While more information is needed on blood clots that are potentially connected to the Johnson & Johnson vaccine, early indications suggest a similar mechanism to the one that has arisen with the AstraZeneca shot. Harder to answer is the question of what it is about those two vaccines in particular that may – very occasionally – trigger the clotting reaction, and whether other vaccines produce a similar effect to some degree.

David Juurlink, a physician at Sunnybrook Health Sciences Centre in Toronto who studies rare side effects, said that while the situation merits concern and close monitoring, the risk of COVID-19 remains far greater for most individuals, especially those who are in their 50s and older.

“I’m much more fearful of acquiring COVID-19 and ending up on a ventilator or dying than I am of some extremely uncommon side effect,” said Dr. Juurlink, who also cares for patients with severe cases of the disease.

The blood clot syndrome, which researchers have dubbed vaccine-induced immune thrombotic thrombocytopenia, mimics a similar condition that can be caused by the blood thinner heparin. Scientists believe that the side effect is triggered by an interaction between the antibodies generated in response to the vaccine and a protein called PF4 that can activate platelets in the bloodstream and cause them to start forming clots.

The condition does not arise until the body has had a chance to form antibodies – typically five to 10 days after vaccination – and is not related to the body’s immediate immune response to the vaccine, which can include flu-like symptoms.

However, anyone who is experiencing symptoms such as headaches, blurred vision or abdominal pains several days after being vaccinated should consult a physician and get tested for possible clotting. Treatment for the condition depends on severity and in more serious cases may include infusion with antibodies that interfere with the clotting process.

A Norwegian study published on Friday in the New England Journal of Medicine identified five cases of vaccine-induced clotting (four women and one man all under 55) from among more than 130,000 individuals who received the AstraZeneca vaccine.

Canada had distributed 500,000 doses of the AstraZeneca shot, sold under the name Covishield, prior to the change in age advice for the vaccine. Since then it has also received 1.5 million doses of AstraZeneca from the United States. As of April 3, Canada had administered a combined 484,693 shots of the Covishield and AstraZeneca vaccines. In March, officials in Quebec said 6,000 doses of the drug had been given to people under 55, before the age limit was imposed.

On Tuesday, the Prime Minister was asked whether in retrospect he thought any part of Canada’s vaccine procurement was a mistake or should have gone faster. “No, not in terms of our vaccine rollout,” Mr. Trudeau said.

The Globe’s tracking shows that among countries with more than one million people, Canada’s vaccination ranking has improved to 25th.

With a report from Les Perreaux and Reuters. 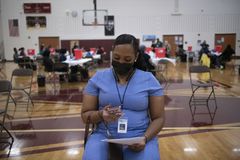 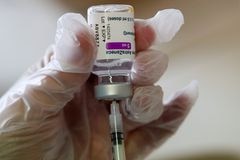 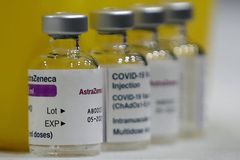 Follow Marieke Walsh and Ivan Semeniuk on Twitter @mariekewalsh @ivansemeniuk
Report an error Editorial code of conduct
Due to technical reasons, we have temporarily removed commenting from our articles. We hope to have this fixed soon. Thank you for your patience. If you are looking to give feedback on our new site, please send it along to feedback@globeandmail.com. If you want to write a letter to the editor, please forward to letters@globeandmail.com.
Comments