Border and customs agents are being pulled from the Greater Toronto Area to handle a “significant” influx of asylum seekers across the U.S. border into Quebec over the summer months.

The move is expected to lead to delays for travellers embarking from overseas and U.S. flights at Toronto’s Pearson International airport – the country’s busiest airport – and land-border crossings in southern Ontario.

A Canadian Border Services Agency (CBSA) memo, obtained by The Globe and Mail, says agents in the Greater Toronto Area will be dispatched to Quebec to alleviate the pressure from “a significant increase in the number of refugee claimants arriving in Canada without passing through a port of entry.”

The agency memo says agents are needed to process asylum seekers in Montreal and Saint-Bernard-de-Lacolle – the two main processing centres – from May 28 to Sept. 16. Agents from the Toronto area will work for a period of four weeks at a time.

The Globe also obtained a memo from Air Canada to its pilots, saying they may not be able to unload passengers immediately on international and trans-border flights on the tarmac because of CBSA staff shortages.

The May 7 Air Canada memo includes an announcement to be read on the public-address system, telling passengers that: “customs is currently dealing with a staff shortage and the custom hall is at capacity. The GTA airport authority has therefore asked that we delay the fight and remain on board.”

Opinion: Another summer, another border crisis

One Air Canada pilot, who spoke on background, said passengers could be expected to sit on the tarmac for up to an hour or more.

A CBSA spokesperson released a statement to The Globe, denying that the reassignment of border and customs agents would lead to delays at Pearson airport.

“There is no direct impact on our Pearson airport operations as a result of the reassignment of border service officers to help manage the irregular border crossings,” Patrizia Giolti said. She added there shouldn’t be any delays at land crossings either.

But Jean-Pierre Fortin, national president of the Customs and Immigration Union, said there will be delays as border agents are planning for a big influx of asylum seekers from the United States once the school year ends.

“Obviously they are anticipating there will be a significant number [of asylum seekers] coming up in the next few weeks,” Mr. Fortin said in an interview. “The wait times will increase [because] we do not have enough officers to deal with the flow of planes or land-border traffic in summer when we are extremely busy.”

Mr. Fortin said CBSA is hiring students to help process passengers at airports, but he argued that the government needs to hire more qualified border agents.

The RCMP intercepted more than 7,600 asylum seekers along the entire Canada-U.S. border from January to April this year – nearly three times as many as the same period in 2017. The majority of the asylum seekers arrived through Quebec. Although the number that will arrive this summer is not known, if the increase continues, Canada will be on track to surpass the 20,593 border crossers it took in last year by a significant margin.

Jacques Cloutier, CBSA vice-president of operations, recently told a parliamentary committee that a little more than 800 employees were reallocated to the Quebec-U.S. land border between July, 2017, and March, 2018, to help with the surge in asylum seekers. He did not say where the employees were transferred from.

Ms. Rempel called on the government to address what she argues is the source of the asylum seeker problem by closing a loophole in a border agreement with the United States that forces Canada to take in asylum seekers who cross between official ports of entry.

The Safe Third Country Agreement requires both countries to refuse entry to asylum seekers who arrive at official border crossings, as both countries are considered safe for refugees. However, since the agreement applies only to people who arrive at official ports of entry, asylum seekers can avoid being turned away by crossing between border posts.

“One step in the direction we can take is by making sure they have that physical support in terms of human resources, which just isn’t the case right now. This kind of temporary reallocation is just a piecemeal approach. It’s not going to work.”

Editor’s note: A previous version of this story incorrectly stated that the Liberals said an application of the Safe Third Country Agreement across the entire border would contravene Canada’s obligations under the United Nations Geneva Convention. However, an application of the pact across the entire border would not contravene the convention because both Canada and the U.S. would have to agree to it.

Opinion
Illegal border-crossers could erode confidence in Canada’s immigration system – and in the Trudeau Liberals Subscriber content
May 6, 2018 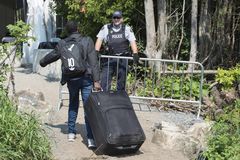 Number of asylum seekers crossing into Canada from U.S. continues to rise, feds say
May 3, 2018 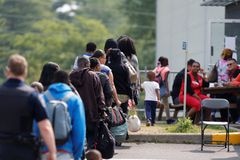 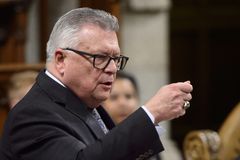 Follow Robert Fife and Michelle Zilio on Twitter @RobertFife @michellezilio
Report an error Editorial code of conduct
Due to technical reasons, we have temporarily removed commenting from our articles. We hope to have this fixed soon. Thank you for your patience. If you are looking to give feedback on our new site, please send it along to feedback@globeandmail.com. If you want to write a letter to the editor, please forward to letters@globeandmail.com.
Comments