Andrew Scheer’s office says Canada’s dairy lobbyists gave false information in their own briefing book when they claimed the Conservative Leader promised to prevent a contentious policy from making it into the party’s election platform, regardless of what the Tory membership wanted.

The briefing document from the Dairy Farmers of Canada was discovered by delegates who say it was discarded on the floor of the Conservative convention in Halifax this weekend, where 3,000 party members gathered to debate and discuss policies that could make it into the 2019 federal election platform. A spokesperson for the organization confirmed the document’s authenticity.

The document outlines the efforts made by the organization, which sent 25 representatives to the convention, to prevent changes to the party’s position on supply management, which currently is to support it. Mr. Scheer also attended the lobby group’s reception on Friday night in Halifax, after the proposal failed to make it to a vote.

One of the policies on the agenda was the phasing out of supply management, which regulates production and pricing on milk, dairy, eggs and poultry in Canada. The issue is one of the main reasons behind the split between former leadership candidate Maxime Bernier and his party. Mr. Bernier is vehemently opposed to the system, which he argues raises prices for consumers, while Mr. Scheer supports it, arguing it is needed to support farmers.

In a section of the briefing book called “safety net,” the Dairy Farmers group claims that Mr. Scheer’s office assured them the policy would not make it into the election platform even if it were passed by the membership.

“The powers of the leader are far reaching in preventing policy from being in the party platform. DFC [Dairy Farmers of Canada] has been told by the Leader’s office that he will exercise this power, and that this policy will not be in the Conservative election platform regardless of the outcome at convention,” the document says.

“Although not ideal, this does represent a safety net should our other tactics fail.”

Mr. Scheer’s office, however, said the information is “not true.”

“We never had a discussion about the platform,” Mr. Scheer’s chief of staff, Marc-André Leclerc, told The Globe and Mail.

“We always said that the leader took a strong position on supply management, he isn’t going to change his mind about this. But we never had a conversation about what they put in their briefing book.”

Mr. Scheer’s office presented The Globe with an e-mail from Jacques Lefebvre, the organization’s CEO, who apologized for “inaccurate” information in the documents.

The e-mail is timestamped at 11:52 p.m. on Saturday, after a page from the briefing book was already made public on Twitter earlier in the evening by Conservative delegate Matthew Bexte.

“It has come to my attention that erroneous information was circulated in one of our briefing documents,” Mr. Lefebvre wrote to Mr. Leclerc.

“This information suggested that, following a communication with the [Opposition Leader’s office] and regardless of the vote, a draft policy on supply management would not make it to the party’s platform. I have spoken with our staff, and this information is inaccurate. Please accept my apologies for any confusion this may cause.”

In the end, delegates ran out of time before supply management could be discussed, meaning it died before a final vote and the Conservative Party still officially supports it. The proposal was last on the list of priorities, meaning the lowest number of riding associations supported it compared with other issues, although some delegates said the Friday session started late and accused the party of stalling.

“I spent thousands of dollars to get to [Conservative Convention 2018] and it turns out that there was a coordinated effort between Big Dairy and @AndrewScheer to betray members and our right to be heard. The outcome was predetermined, our voices don’t matter,” Mr. Bexte, who supported Mr. Bernier in last year’s leadership race, tweeted along with the briefing document he released on Saturday.

Mr. Bernier also weighed in on Twitter on Sunday, saying "I know for a fact that many of my former caucus colleagues are privately opposed to supply management and are good people who genuinely want to fight for conservative values. How do they feel about being blatantly manipulated like this?"

Bruce Sargent, a dairy producer from Ontario, said it’s within Mr. Scheer’s right as leader to reject a policy if he feels it will negatively affect the party’s chances in the next election.

Mr. Sargent said supply management gives farmers a fair chance at earning income from the marketplace, and not subsidies.

“If you take away supply management, the farmers lose their unified voice to get a price based on the cost of production, and they’re pitted against each other like they are in the U.S.,” he said. 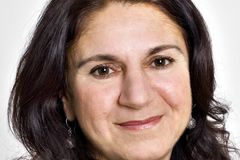 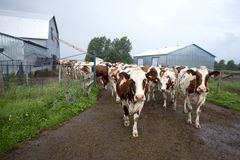 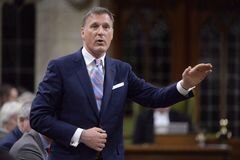