Marieke Walsh and Kristy Kirkup
Ottawa
Published May 26, 2021 Updated May 26, 2021
For Subscribers
Comments
Text Size
Please log in to listen to this story. Also available in French and Mandarin. Log In Create Free Account

The Public Health Agency of Canada’s emergency stockpile of personal protective equipment was woefully inadequate to meet the needs of provinces and territories at the start of the pandemic because the agency ignored problems it was aware of for years, the federal Auditor-General found.

Karen Hogan’s report on Wednesday said the agency did not address issues raised in a series of its own internal audits. The result was that PHAC did not have reliable information about how much personal protective equipment, or PPE, was in its stockpile, relied on old policies with outdated information and did not have a benchmark for how much of the critical equipment it should have stocked.

“It was clear that the stockpile at the beginning of the pandemic was not sufficient to meet some of the earlier requests,” Ms. Hogan said at a press conference in Ottawa. The federal government was only able to respond to “a very small fraction” of the requests that came in from provinces and territories. That changed in April as a result of a federal bulk-purchasing program.

The audit supports Globe and Mail reporting from last spring that detailed the inadequacies in the stockpile. At the time, officials said the agency did not have a target for the amount of gear that should be stockpiled, did not know what the provinces and territories had stockpiled and did not advise those governments about how much should be kept on hand.

The report was one of two tabled in Parliament on Wednesday. The second found shortcomings in Indigenous Services Canada’s readiness to respond to the pandemic, including in the department’s own stockpile of PPE and its inability to meet more than half of the 963 requests for extra nurses and paramedics.

Indigenous Services Minister Marc Miller defended his department, saying it “adapted and overcame challenges, I think, that existed across government in procurement.”

In response to the reports, the government said it accepted all of Ms. Hogan’s recommendations. Health Minister Patty Hajdu said the recommendations “will ensure Canada is prepared for future public-health events.”

On the federal public health agency audit, Ms. Hogan said her office tried to establish the stock levels that the agency had at the outset of the pandemic but the information provided was too unreliable to use so her audit instead focused on how the government adjusted course during the pandemic.

“The quality of the data was such that we couldn’t rely on what the agency said was stock on hand,” Ms. Hogan said. “When it’s bad, let’s not focus on how bad is it, and why did it get to the situation it got to, and focus on how to move forward.”

Her audit found that the agency and government departments adjusted policies and helped meet the PPE needs of the provinces and territories as the pandemic progressed.

Both reports found that government agencies and departments reacted quickly and collaborated during the pandemic but in both cases, the government could have been much better prepared.

“If there is one overall lesson to learn from this pandemic, it is that government departments need to take action to resolve long-standing issues and to see the value in being better prepared for a rainy day,” Ms. Hogan told reporters.

Last December, Prime Minister Justin Trudeau said he regretted that the government did not start stockpiling PPE earlier and was left scrambling in March and April. By the end of last year, the government had spent almost $7.4-billion on medical supplies.

“There are stories of front-line health workers who had to bring their masks home and wash them. That shouldn’t have happened,” Mr. Trudeau told CTV.

The issues with the stockpile were raised in 2010 and 2013 internal audits, and the agency’s failure to act on them “calls into question the effectiveness of the agency’s governance and oversight” of the stockpile prior to the pandemic, the report said.

Given the time elapsed, the Auditor-General’s office said it “would have expected full implementation” of the agency’s decade-old recommendations.

The audit released Wednesday found that budget constraints were a significant factor in why the agency didn’t act on its own recommendations. For example, budget rather than need informed equipment purchasing and a January, 2020 proposal to overhaul inventory management was shelved because money was not made available.

The early supply shortages were largely resolved last summer. Ms. Hogan said Health Canada led the creation of a needs-based assessment system that included modelling future disease activity, something that had never been done before.

Ms. Hogan said the government has found a “workaround” for its stockpile during the pandemic but it still needs to create a permanent system to properly maintain the stockpile, “with clear timelines.” In its response to the recommendations, the public health agency said it is working on a comprehensive management plan that will be completed “within one year of the end of the pandemic.” Ms. Hajdu did not say Wednesday when the plan would be implemented.

For Indigenous Services, Ms. Hogan recommended that the department review the management of its PPE stockpile, address the continuing nursing shortage in some First Nations communities and review the nursing and paramedic support provided to Indigenous communities.

The recommendations stem from her finding that the department expanded access to contract nurses to all Indigenous communities and created new contracts for nurses and paramedics, but was still unable to meet requests.

“This increased the risk that some communities could not access the health services they needed during the COVID-19 pandemic,” the report found. From March, 2020 to March, 2021, the department was unable to meet 505 of the 963 requests for extra health care staff that it received.

The audit found that the department did not properly manage its PPE stockpile, despite a 2014 policy that outlines how much gear it needed to have on hand.

“We found that the department did not follow this approach and, therefore, did not have sufficient amounts of some PPE items at the beginning of the pandemic,” the audit said.

Opinion
Among countries that should have known better, Canada’s COVID-19 response was abysmal
May 26, 2021 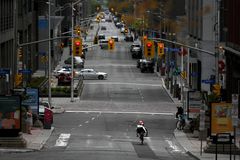