Hastings-Lennox and Addington MP Derek Sloan is a political neophyte who is running for the leadership of the Conservative Party of Canada because he believes God has called him to redeem a fallen nation, and who hasn’t the faintest hope of winning.

So it’s tempting to just ignore the Facebook video in which he asked of Theresa Tam, the Chief Public Health Officer: “Does she work for Canada or for China?”

But this is a difficult time. Hundreds of thousands of people have lost their jobs, leaving many angry and fearful. Most of the rest will see their standard of living decline, their taxes go up, the value of their homes decrease, their economic insecurity increase.

A populist message that blames the ills of the world on experts and foreigners may resonate now in a way it would not have even a few weeks ago.

Mr. Sloan probably won’t be able to foment a populist backlash. Someone else might. Maxime Bernier’s People’s Party earned a measly 1.6 per cent of the popular vote in last October’s election. How would a similar movement with a more effective leader do now?

“I thought that God was leading me, and that God had placed me in the riding at an opportune time," Mr. Sloan said in an interview published on the website of the Seventh-day Adventist Church, North American division, last December. He may be the first member of that denomination elected to Canada’s Parliament.

Back in December, Mr. Sloan limited his ambition to learning the responsibilities of a member of Parliament and serving the members of his riding, a combination of suburban and rural communities in Eastern Ontario between Belleville and Kingston.

But he also said that “I have been keeping my eyes open for God’s leading in my life." Soon after, it would seem, God led him to believe he should become prime minister.

The married father of three is running on a platform that would question abortion rights, reduce immigration, roll back protections for transgender Canadians and withdraw Canada from the Paris accord on fighting climate change.

“What I view as a personal attack against Dr. Tam from a member of our opposition caucus goes against the values that I believe we as elected officials should aspire to,” B.C. MP Dan Albas tweeted.

Word inside the party is that Mr. Sloan, despite raising enough money and finding enough signatures to make it into the final round of the Conservative leadership contest, has little traction among members and is likely to finish last.

But another socially conservative candidate is garnering attention. Leslyn Lewis is a Toronto-based lawyer whose parents came to Canada from Jamaica. She is a “pro-life, no hidden agenda" candidate who supports the rights of gun owners, who opposes a proposed law banning conversion therapy for LGBTQ youth and who would limit foreign aid.

Although Ms. Lewis is thought to be more popular among party members than Mr. Sloan, she too is unlikely to win. Peter MacKay, a senior figure in Stephen Harper’s governments, and Durham MP Erin O’Toole are favoured. Both are social moderates. Having postponed the vote because of the pandemic, the party’s leadership committee will discuss next week whether and when a mail-in ballot could take place.

Here’s hoping that vote can be held soon. Mr. Scheer has embarrassed himself twice this week: finding himself offside with all other parties on how Parliament should meet, and refusing to censure Mr. Sloan.

Conservatives have much that is constructive to say. They are historically far more skeptical of the Communist regime in Beijing than the Liberals, and they offer an alternative for those who want to see the massive expansion of state power during this crisis rolled back as soon and as much as possible.

When logistics permit, they need to choose a leader who can focus the caucus and the party on holding this government to account.

But dark times produce dark political movements on the right. Derek Sloan is likely to fail. But who might be slouching toward us behind him? 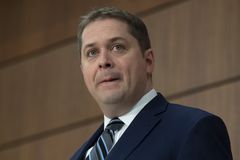