Independent senators want to suspend Sen. Lynn Beyak a second time, even though she has apologized for posting derogatory letters about Indigenous Peoples on her website.

After months of digging in her heels, Beyak apologized “unreservedly” Tuesday to her fellow senators and promised to take a training course on racism toward Indigenous Peoples.

But Sen. Yuen Pau Woo, leader of the Independent Senators Group, says that’s not enough for Beyak to avoid another suspension.

“It is normal practice in professional bodies for a suspension to take effect during a period of remedial training, even after an apology has been offered,” he said in a statement issued by his office Wednesday.

Woo said members of his group, the largest caucus in the upper house, are frustrated with the procedural games that were played Tuesday to prevent the Senate from voting on the ethics committee report that recommended Beyak be suspended once again.

Beyak was kicked out of the Conservative caucus and eventually suspended without pay last May after refusing to remove the offensive letters from her website – a suspension that ended automatically when Parliament dissolved for last fall’s federal election.

The Senate’s ethics committee recommended last month that Beyak be suspended again because she had not met the conditions laid down by the Senate for returning to the upper house in good standing, including offering a full apology, removing the letters and taking an anti-racism course.

The Senate’s administration removed the letters from Beyak’s website after she refused to do so herself. The ethics committee deemed her apology to be perfunctory and her cultural sensitivity training a fiasco. The training was provided by the Ontario Federation of Indigenous Friendship Centres, which cut it short after concluding Beyak had no interest in confronting her opinions about Indigenous Peoples.

However, after Beyak’s contrite apology Tuesday, some of her former Conservative colleagues wanted the ethics committee to reconsider the matter. A motion to that effect was defeated by a vote of 49-24.

The Senate is to vote Thursday on the ethics committee recommendation to re-suspend Beyak, provided that there are no further delaying tactics such as those used Tuesday, when Conservatives and former Conservatives moved to adjourn debate and to adjourn the Senate altogether to avoid a vote on the matter.

Independent Sen. Tony Dean noted Wednesday that the matter has dragged on for more than a year. He said the Senate has taken a “very reasonable approach” with Beyak and further delays are “at the expense of its reputation.”

“I’m embarrassed,” he said in an interview of the failure to resolve the matter.

Dean said the logical approach, particularly given Beyak’s failure to complete the anti-racism training the first time, is to suspend her again, have the ethics committee devise an appropriate training program for her and then see how that works out before considering whether the suspension should eventually be lifted.

The offending letters on Beyak’s website were posted in response to a 2018 speech in which she argued that Indian residential schools did a lot of good for Indigenous children, although many suffered physical and sexual abuse and thousands died of disease and malnutrition.

The Senate’s ethics officer, Pierre Legault, concluded last March that five of the letters in particular contained racist content, suggesting that Indigenous people are lazy, chronic whiners who are milking the residential-schools issue to get government handouts.

In refusing to remove the letters or apologize for them, Beyak cast herself as a defender of free speech and a victim of political correctness.

However, on Tuesday she changed her tune, telling the Senate she now realizes the letters were “disrespectful, divisive and unacceptable” and that her refusal to remove them wrong. 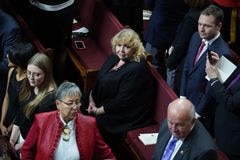 Sen. Lynn Beyak denies she ever claimed to be Metis
Subscriber content
February 5, 2020 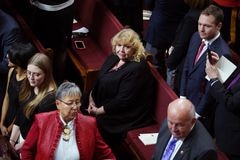