Nearly halfway through Canada’s 12-month mission in Mali, questions and disappointment are emerging over what some experts see as the Trudeau government’s lack of interest in the country – and peacekeeping in general.

Mali has been racked by violence and instability since a rebellion and coup in 2012, and there are fears that Islamic extremists and criminal organizations will run wild there and across the wide expanse of Africa south of the Sahara Desert.

Canada has had about 250 military personnel and eight helicopters in Gao, Mali, to provide medical evacuations and logistical support since August, which Prime Minister Justin Trudeau says is helping make a difference.

“The peace process is unfolding in Mali,” Mr. Trudeau said during a whirlwind visit to Gao on Dec. 23. “Certainly our presence here is allowing it to unfold more quickly than it otherwise would be, but it is a difficult situation.”

The United Nations is reporting limited signs of progress there over the past three months, as slight improvements in the political and humanitarian situation have been marred by a dramatic spike in violence.

That includes a marked increase in the number of improvised explosive devices targeting peacekeepers and officials, as well as several co-ordinated attacks on UN bases and staff.

Yet several experts say they were hoping the peacekeeping mission would serve as a way for the Trudeau government to deepen its engagement in the UN, Mali and the Sahel region, none of which has happened.

Rather, they argue the government appears to have little actual interest in Mali or peacekeeping, in spite of spending millions of dollars on both.

“The Canadian contribution to MINUSMA [the UN mission in Mali] will be forgotten quickly,” said Bruno Charbonneau, an expert on Mali at Laurentian University in Sudbury.

The country has been one of the top recipients of Canadian foreign aid for the past several years, which experts say is helping. It has also received some of the $450-million set aside in 2016 for peace programs.

Yet the Trudeau government has repeatedly rejected the prospect of extending the Mali mission by several months to minimize a gap between when the Canadians stop flying in July and the arrival of Romanian replacements in the fall.

That stands in sharp contrast to the repeated extensions of Canada’s military missions in Latvia, Ukraine and Iraq, none of which falls under the auspices of the UN.

“I have to wonder: Why not the UN? Why not Mali?” said Walter Dorn, an expert on peacekeeping at the Canadian Forces College in Toronto.

There were suggestions in July that Canada would step up its presence and involvement in Mali, when officials revealed plans to send up to 20 police officers and spend millions of dollars to help the UN train local security forces.

While Public Safety Minister Ralph Goodale’s office said Tuesday that two police officers have undergone predeployment training and will arrive in Mali later this month, it did not provide a timeline for when the rest would be deployed.

Meanwhile, experts say the government’s overall long-term plans for Mali remain shrouded in mystery – including its plan for aid funding.

“My colleagues and I are trying to make the case for more involvement [in Mali], but have the impression of speaking to a relatively disinterested audience,” said Jonathan Sears, an expert on Mali at the University of Winnipeg.

Defence Minister Harjit Sajjan’s spokeswoman, Byrne Furlong, on Tuesday commended the Canadian military’s work in Mali, even as she asserted the government’s commitment to “promoting peace and stability in the world.”

“We are proud of the important work the women and men of our Canadian Armed Forces are doing to help set conditions for durable peace, development, and prosperity in Mali,” Ms. Furlong said in a statement. 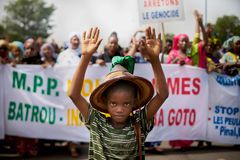 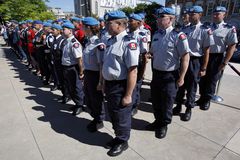 Trudeau surprises peacekeepers in Mali, tours conflict zone’s harsh environment
January 10, 2019
Report an error
Due to technical reasons, we have temporarily removed commenting from our articles. We hope to have this fixed soon. Thank you for your patience. If you are looking to give feedback on our new site, please send it along to feedback@globeandmail.com. If you want to write a letter to the editor, please forward to letters@globeandmail.com.
Comments