A candidate vying to be Canada’s next Conservative Leader, who was punted by the party following complaints about alleged racist comments, is suing to be allowed back in the race.

Jim Karahalios, who was disqualified by the Conservative Party on Friday, announced Tuesday in a statement that the Ontario Superior Court of Justice approved an urgent request to consider his application.

The latest twist in the leadership contest comes as the party faces growing pressure to postpone the entire race while the country is seized by the COVID-19 pandemic. The party’s leadership committee is expected to meet this week to decide whether to continue with its June 27 timeline.

Mr. Karahalios did not respond to an interview request from The Globe and Mail. Mr. Karahalios is also suing the Ontario Progressive Conservative Party, alleging a rigged election for the position of party president.

On March 7, Mr. Karahalios sent an e-mail to his supporters with the subject line “Say NO to Shariah Law. Stop Erin O’Toole.”

The e-mail was directed at Mr. O’Toole’s campaign chair Walied Soliman. The party has not said what led to Mr. Karahalios’ disqualification but complaints were filed in relation to the e-mail and other statements made by him through mail and social media.

Mr. O’Toole’s campaign and the Urban Alliance on Race Relations both filed complaints with the party about the comments.

“There’s no place for bigotry and intolerance in our party,” Mr. O’Toole said in a statement. He called on other leadership candidates to condemn Mr. Karahalios’ “disgraceful rhetoric.”

The Urban Alliance on Race Relations’s complaint with the party was about a Facebook post in which Mr. Karaholias took issue with accusations of racism that resulted from the e-mail. The group said the post included a picture of Mr. Karahalios “surrounded by images of angry black men and women a few of whom appear to be holding either baseball bats or pieces of wood.”

“This image is profoundly insulting and deeply racist,” Nigel Barriffe, president of the Urban Alliance on Race Relations, said in the complaint.

Following a review by the party’s chief returning officer and an appeal from Mr. Karahalios through the party’s internal complaints process, the party confirmed he was out.

In a statement, Mr. Karahalios accused the party of attempting to “hijack democracy by removing my name from the ballot.”

But the Conservative Party defends its process.

“Our process was followed appropriately, our rules have been laid out very carefully, everyone knows what the rules are and we followed the rules in making the decision," Lisa Raitt, the co-chair of the party’s leadership election organizing committee, said Tuesday.

The Superior Court has adjourned all scheduled civil hearings due to the COVID-19 pandemic but is still allowing for the hearing of “urgent and time-sensitive motions.” In his decision, Justice Frederick Myers said this application falls under that exception.

Wednesday is the deadline for the party to finalize its leadership ballot. Mr. O’Toole, Peter MacKay, Derek Sloan and Leslyn Lewis are confirmed candidates.

Mr. O’Toole and Mr. Sloan have called for the race to be delayed in light of the COVID-19 crisis enveloping Canada. Ms. Raitt said the committee is still looking at whether it can conduct the leadership vote, which requires a mail-in ballot, under the current circumstances.

Mr. MacKay, in the meantime, has called for it to be sped up. But Ms. Raitt said in her view logistical requirements make accelerating the race “physically impossible.”

Leadership hopefuls Marilyn Gladu and Rudy Husny have not yet submitted the required cash and signatures to make it onto the ballot and are calling for a delay to the race. 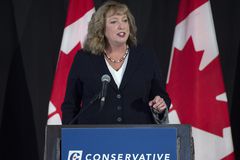 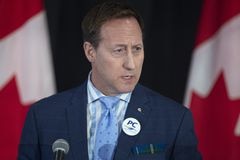