It’s nice to see Donald Trump showed up Monday for the new Cold War. The problem is, we don’t know if he will stay through next month.

Canada, Britain and other allies will breathe a sigh of relief. They worry about Russia’s increasing willingness to engage in disruptive dirty tricks around the world, symbolized by a brazen attempt to kill a former Russian spy and his daughter with a deadly nerve agent in Salisbury, Britain. But firing a warning shot at the Russians works better with U.S. firepower. And it hasn’t always seemed clear that the U.S. President is in.

That’s why the U.S. move to expel 60 diplomats, as part of a concerted action with other Western nations, is critical: It signals that Mr. Trump’s America is willing to push back at Moscow, and impose consequences for its actions. The problem is that U.S. allies can’t be sure Mr. Trump will stick with it.

When Britain expelled 23 Russian diplomats about 10 days ago in response to the Salisbury incident, it didn’t seem at all sure that the Trump administration would follow suit. Then-secretary of state Rex Tillerson was keen to stand with an ally, but he was fired. Mr. Trump’s Russia policy has been notable for inconsistency. When Russian President Vladimir Putin was re-elected, Mr. Trump called to congratulate him, and said nothing about Salisbury.

This isn’t how Cold Wars used to work. The United States used to lead them. This time, Britain screamed that Russia’s reckless behaviour was a threat. Canada was stalwart in siding with Britain. So were several European allies. But it was hard to be sure where the United States stood.

No wonder the Britons were triumphant Monday. British Prime Minister Theresa May said the Russians had tried to split the Western alliance, and it “spectacularly backfired.”

Britain’s High Commissioner to Canada, Susan le Jeune d’Allegeershecque, said in an interview that the move by 18 countries to expel more than 100 Russian diplomats “is the biggest-ever international response.” Britain argued the Salisbury attack could have taken place in any country, and is part of a broader pattern of Russian behaviour. The facts Britain shared in secret with other countries made the case compelling, she said. Canada, she noted, had quickly expressed strong support.

Of course, it’s not easy to say what impact the diplomatic expulsions will have, but it is easy to say concerted action by several countries will have a larger impact. Canada will expel four Russian diplomats and will deny entry to three who were seeking international credentials. The U.S. move to expel 60 diplomats and order the closing of the Russian consulate in Seattle is a stiff step in diplomatic terms.

Richard Fadden, a former director of Canadian Security Intelligence Service and national security adviser to prime minister Stephen Harper, said the expulsions will have an impact on Russian intelligence gathering, and beyond that, annoy Moscow.

“Are they going to change their way of doing business overnight? No,” Mr. Fadden said. “But it will register with them that there’s a cost.”

The Russians will retaliate, of course. Canada and several other Western countries had already imposed sanctions over the annexation of Crimea in 2014. British politicians have expressed concern that soccer fans visiting Russia for this summer’s World Cup will be mistreated by Russian authorities. The Canadian government’s travel advisory for Russia already warns that authorities there might place foreigners under surveillance. It looks like a new Cold War is coming, and it will do the world no good.

Mr. Fadden said Western countries are going to have to discuss among themselves the point at which Russia goes too far. That seems like a clearer question when it’s about military action than when it is cyberwarfare. And it used to be the United States that led those discussions.

The fact that the Americans took an emphatic role in the expulsions suggests they might lead now. Or maybe not. Mr. Trump’s Russia policy has swerved like a drunk driver: His administration blamed Russia in 2017 for allowing Syria to have chemical weapons, and it armed Ukraine, but Mr. Trump has touted Russia as a diplomatic partner, denied Russian meddling in U.S. and other Western elections, and refused to criticize Mr. Putin.

The U.S.-led, concerted diplomatic action on Monday sent a warning to Russia that there’s a cost to disruptive action. But that’s weakened because neither Russia nor U.S. allies can be sure Mr. Trump will follow through.

Globe editorial: For once, the world is united against Putin’s provocations
March 26, 2018 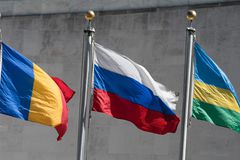 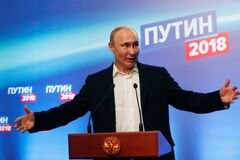