The rule that ensures that every riding in the country has equal weight when choosing the federal Conservative Party leader could have a major impact in deciding who replaces Andrew Scheer.

On the positive side, the rule ensures that any winning candidate has support from every region. On the negative side, single-issue candidates may capture weak ridings. We’ll see in the months ahead whether the positive or negative wins out.

A bit of history: Back in 2003, Canadian Alliance Leader Stephen Harper sought to convince Progressive Conservative Leader Peter MacKay that the two parties should merge. The PCs were broke and facing electoral oblivion, but Mr. MacKay rightly feared that the proposed merger would really be a takeover of his party by the much larger Alliance.

To mitigate the Alliance’s numerical superiority, Mr. MacKay insisted that each riding association in the country be equally weighted during a leadership campaign. Calgary ridings, where Alliance supporters were thick on the ground, would each be given 100 points, with those points distributed to candidates based on the percentage of votes they received. Ridings in Quebec, where neither party could organize a Tupperware party, would also receive 100 points.

The hope was that the Progressive Conservatives would be able to influence the outcome of leadership votes, even if their supporters weren’t as numerous as Alliance supporters. Mr. Harper hated the rule, because to his mind it rewarded weakness. But Mr. MacKay was adamant and Mr. Harper accepted the rule to secure the merger.

From the very beginning, candidates tried to game the system. Belinda Stronach, daughter of auto parts tycoon Frank Stronach, sought the leadership of the new Conservative Party in 2004 despite never having run for public office, hoping her campaign organization could capture weak ridings.

She failed, losing to Mr. Harper. But Andrew Scheer had better luck in 2017. In that contest, Quebec MP Maxime Bernier was favoured to win the Conservative leadership. But Mr. Bernier opposed supply management, which protects the dairy industry from competition. With the help of the dairy farmers, Mr. Scheer beat Mr. Bernier in Quebec ridings outside Montreal. The Regina MP won the contest by the narrowest of margins, and those Quebec votes were key.

Doug Ford won the Ontario Progressive Conservative leadership under similar rules, even though his opponent, Christine Elliott, won the most votes and the most ridings.

Stephen Harper never got over his loathing for the equality-of-ridings rule. When he tried to have the rule changed at the 2005 Conservative policy convention, Mr. MacKay threatened to bolt the party. Mr. Harper was so angry he kicked a chair – twice. But he backed down. There have been attempts at subsequent policy conventions to water down or scrap the rule, but it remains in the party’s constitution to this day.

If Mr. MacKay decides to seek the leadership, the rule could help him lock down 32 seats in Atlantic Canada, where he is popular and the party isn’t particularly strong.

Tim Powers, an Ottawa consultant with deep Conservative ties, supports equality-of-ridings, because "it does force you, if you are a serious national candidate, to win support in different parts of the country,” he said Tuesday. No one can sign up, say, 100,000 members in Toronto and then coast to victory. “It prevents a cakewalk.”

Yaroslav Baran, a former aide to Mr. Harper, also supports the existing rule over the straight one-member-one-vote alternative. “It promotes a more nation-building system,” he said.

In any event, as Mr. Powers points out, the bigger challenge for Conservatives is to go beyond the one in three voters who are core supporters, to broaden and deepen the Conservative Party’s appeal by embracing a more contemporary world view.

The Liberals allow people to vote for party leader simply by declaring themselves supporters, without having to pay a fee. The policy, adopted after the 2011 election, helped the party broaden its base and improve fundraising. (I advocated this policy in a 2009 book, Open and Shut.) The Conservatives should consider doing likewise.

But that is a different, much larger discussion. In the context of how the next leader is chosen, equality-of-ridings will prevail, for good or for ill. 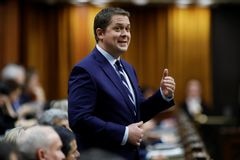