Erin O’Toole said he won’t “prejudge” the outcome of a firearms classification review that a Conservative government would conduct if elected, leaving open the possibility that the federal government’s ban on some 1,500 assault-style weapons could be lifted.

For the fourth day on the campaign trail, Mr. O’Toole was pressed to explain his party’s position on the May, 2020, ban brought in by the Liberal government. It includes guns used in mass shootings in Canada such as those at Montreal’s Dawson College and École Polytechnique and in Moncton.

Since the Conservative Leader’s appearance in the first leaders’ debate on Thursday, his message to voters has shifted considerably. However, critics and supporters say his actual policy has not.

At the time, Mr. O’Toole said he would “maintain a ban on assault weapons,” but the next day, gun lobby groups said he was referring to a 1977 ban on fully automatic guns rather than those banned in 2020.

The party first stood by its position, but then on Sunday, Mr. O’Toole announced a Conservative government would maintain the 2020 restrictions “full stop.” He added: “We will then have an independent review – public – of our classification system.”

He did not clarify whether the guns that are currently banned in Canada would change after that review. Canada classifies firearms under three areas: prohibited, restricted and non-restricted.

“I’m not going to prejudge that process because I should not be running that process,” Mr. O’Toole said on Monday. The party did not say who would be in charge of that panel.

Despite his change in position, the Conservative platform still says the 2020 order-in-council, which brought in the ban, would be repealed. A footnote added on Monday says, “all firearms that are currently banned will remain banned.” Asked how the two can both be true, party spokesperson Mathew Clancy said the original policy was kept “for the sake of openness and transparency,” and that the footnote is there to “clarify the position as Mr. O’Toole stated.”

The changing message from the Conservatives shows the party contending with the promises it made to gun owners with the values of voters in key swing ridings, said A.J. Somerset, who wrote a book on gun culture called Arms: The Culture and Credo of the Gun.

“It’s a flip-flop and it’s not a flip-flop. There’s a lot of word games,” Mr. Somerset said. “I think that promise is still there and the signal to gun owners is you’re not going to get what you want as fast as you were hoping.”

National Firearms Association executive vice-president Blair Hagen had a similar take on Monday. He said his group shares many members with the Conservative Party and he does not believe Mr. O’Toole has reversed his position.

“Under a Conservative government, we are expecting the repeal of the May, 2020, OIC will take place,” Mr. Hagen said.

On the weekend, Conservative candidate Rob Morrison said his party has not changed from its original position. In response on Monday, Mr. O’Toole said: “I am the leader and we will have an approach focused on public safety, focused on maintaining restrictions in place and having a review of our classification system that removes the politics from this.”

The Conservative Leader said gun crime had gone up under the Liberal government. In July, Statistics Canada released a report that found the rate of Criminal Code firearm offences went up for a sixth consecutive year. A 2019 Globe and Mail investigation found while semi-automatic rifles have been used in some of Canada’s most notorious mass shootings, their overall prevalence in Canadian homicides is nominal.

Canadian Doctors for Protection from Guns, the Canadian Anti-Hate Network and Danforth Families for Safe Communities in a joint statement on Monday said they “are further alarmed” by Mr. O’Toole’s latest comments.

They also said the Conservative platform directly states gun manufacturers and gun owners will be included in the review, that same document didn’t explicitly name other groups including survivors, scientists or physicians.

At a campaign stop in Welland, Ont., on Monday, the Liberal Leader said Mr. O’Toole is trying to please people on both sides of the debate. “He’ll say anything to try and get elected,” Mr. Trudeau said.

In nearby Hamilton, NDP Leader Jagmeet Singh said his party would implement a mandatory buyback program to enforce the 2020 ban. He criticized the Liberals for breaking their 2019 election promise on that measure. The Liberals are now promising in this campaign to make the buyback program mandatory. 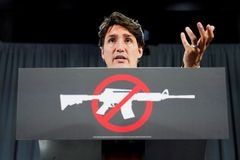 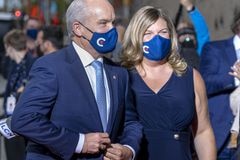 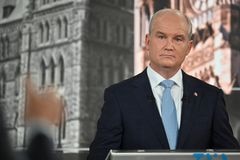 O’Toole says to look at Conservative platform to ‘fill in the blanks’ on gun policy
September 4, 2021 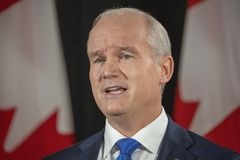