Erin O’Toole won the leadership of the Conservative Party with a “True Blue” platform, but is vowing to broaden the party’s appeal as the focus shifts to the next election.

Strong organization in Quebec, an effective digital campaign and a message that won the later ballot support of social conservatives are widely viewed as key elements of the Ontario MP’s success.

In the early hours of Monday morning, Mr. O’Toole won the leadership in the third round after securing the ranked-ballot votes of many supporters of Leslyn Lewis, a Toronto lawyer and social conservative who placed third in the race. Former cabinet minister Peter MacKay placed second, and Conservative MP Derek Sloan was fourth.

Mr. O’Toole fared particularly well in Quebec, and at least one member of Parliament believes it helped that he has a seat in the House of Commons, unlike Mr. MacKay and Ms. Lewis.

Mr. O’Toole could be running to become prime minister in a matter of months – if not weeks. Prime Minister Justin Trudeau last week prorogued Parliament until late September, as his minority Liberal government faltered under the weight of the WE Charity controversy and last week’s departure of finance minister Bill Morneau. When it returns, a Throne Speech will trigger a confidence vote, and depending on the outcome, possibly a general election.

In his victory speech early Monday morning, Mr. O’Toole said Conservatives must continue to “point out Liberal failings,” but also show Canadians their vision for the country. And after a campaign prolonged by the COVID-19 pandemic in which Mr. O’Toole sought to assert himself as more conservative than his chief opponent, he pivoted in his speech, speaking to Canadians about why he should be leader.

“It is time for many Liberal and NDP voters to socially distance themselves from these out-of-touch parties. It’s time for more Canadians to look at the Conservative Party again.”

“I thought that he hit just about every note that Conservatives want to hear, and I’m sure, and I hope, Canadians want to hear,” Mr. Kent said.

He also said having a seat in the House of Commons helped Mr. O’Toole, adding that in the midst of a pandemic, the leader needs to be in the House.

Tim Powers, a Conservative strategist and vice-chairman of Summa Strategies, said Mr. O’Toole’s disposition shifted over the course of his speech, becoming increasingly warmer, and indicative of how he is known.

“What the O’Toole team did very well is they picked a narrative that their candidate maybe didn’t naturally fit into, but it was a comfortable enough narrative for their second choice targets that it worked for them,” he said.

Mr. O’Toole is scheduled to address the media on Tuesday in Ottawa.

Mr. MacKay led on the first ballot, but Mr. O’Toole overtook him on the second and third ballots once Ms. Lewis and Mr. Sloan were eliminated. Ms. Lewis secured the most votes on the second ballot, but because the system is based on allocating 100 points for each of the 338 ridings rather than total votes, she was eliminated.

Mr. O’Toole had an aggressive social-media presence in the campaign.

Earlier this year, Jeff Ballingall joined the O’Toole campaign to manage digital strategy. Mr. Ballingall is founder of conservative Facebook group Ontario Proud and co-founder of the right-wing website The Post Millennial, which published stories about the leadership campaign that were generally favourable toward Mr. O’Toole and critical of Mr. MacKay.

Mr. MacKay congratulated Mr. O’Toole and called for the party to unite behind him. “I feel we ran a valiant and high-road campaign,” he said on Monday afternoon on Twitter. “It was an amazing experience, though not the result we hoped for. I now get to focus on family and future forms of public service.”

Quebec Senator Leo Housakos, who was a national co-chair of Mr. O’Toole’s campaign, said Mr. O’Toole gained the support of members in Quebec because he had a Quebec-specific platform, recognized the province as a nation, took time to improve his French, and didn’t shy away from French television interviews.

“I have to say over the last few months, his improvement on the French language has been exponential and it’s not something that went unnoticed by Quebeckers,” Mr. Housakos said. Conversely, Ms. Lewis’s campaign acknowledged her weakness in French proved costly.

“I think it was very robust,” she said.

Ms. Lewis, who is anti-abortion and opposes legislation that would ban conversion therapy on LBGTQ people, clearly emerged as a new political force inside the Conservative Party, reigniting debate among Conservatives over how Mr. O’Toole should manage his party’s socially conservative wing.

After the Conservatives’ election defeat, Mr. MacKay described then-leader Andrew Scheer’s struggles in discussing his social conservative views as a “stinking albatross” around his neck that contributed to the Liberal victory.

“It is fair to say that social conservatives gave MacKay a ‘spanking,’ ” the Campaign Life Coalition said in a statement on Monday. The group said that while Mr. O’Toole is not a social conservative, it expects he will ensure those members of the party are respected.

Steve Outhouse, who managed the Lewis campaign, said her strong showing shows solid support among Conservatives for a candidate who holds socially conservative views while also speaking of party unity and focusing on a wide range of policy issues.

Andrew Brander, a senior consultant with Crestview Strategy and a chief of staff to Lisa Raitt when she was deputy Conservative leader, said on Monday that Mr. O’Toole will need to do everything he can help Canadians get to know him.

“The one thing we learned from the last campaign is when you’re introducing yourself to people during the election, it is already too late and your opponents have largely defined you by that point,” he said. 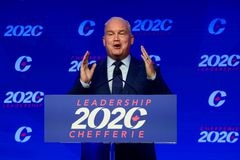 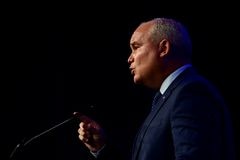 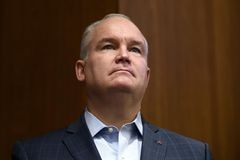 Follow Janice Dickson, Bill Curry and Kristy Kirkup on Twitter @janicedickson @curryb @kkirkup
Report an error Editorial code of conduct
Due to technical reasons, we have temporarily removed commenting from our articles. We hope to have this fixed soon. Thank you for your patience. If you are looking to give feedback on our new site, please send it along to feedback@globeandmail.com. If you want to write a letter to the editor, please forward to letters@globeandmail.com.
Comments