Federal Conservative Leader Erin O’Toole says his pending climate-change plan will go further than the “laundry list” of environmental commitments the party advanced in the last election, where they fell short of winning government.

In an interview with The Globe and Mail on Wednesday, Mr. O’Toole said the Conservatives’ approach to climate change will be more substantive, when asked how his long-awaited plan will improve on the commitments of his predecessor Andrew Scheer.

“We had kind of a laundry list of a number of things we were going to do on the environment, but there was not something that people could specifically look to for emission reduction,” Mr. O’Toole said, referring to the Conservatives’ 2019 platform approach.

Mr. Scheer’s plan included a pledge to scrap the federal carbon-pricing plan, and proposed to set emissions standards for major emitters, to require Canadian companies to invest in emissions-reducing technology and to support Canadian innovation with $1-billion in venture capital for Canadian green technology companies.

Mr. O’Toole continues to face questions after delegates at last month’s Conservative policy convention voted against a resolution that would have included the statement “climate change is real” in the party’s official policy document – a sharp contrast to Mr. O’Toole’s keynote speech a day earlier, in which he said that the party needed to “boldly reclaim the environment as an area where Conservatives are leaders.”

The vote occurred before Mr. O’Toole’s speech and the results were announced afterwards.

Mr. O’Toole has said the party must do better on the climate-change file in order to rally the widespread support it needs to win power, and promised a comprehensive plan to reduce emissions would be released before the next federal election, expected this year.

However, he has ruled out a carbon tax as a tool to reduce climate change – a position that some observers say will be problematic.

During his interview with The Globe, Mr. O’Toole acknowledged that some voters are in favour of carbon pricing, but added, “There are other ways you can tackle emissions strategically – and actually smart policy that I will be able to point to and say, ‘This is how you’re going to be playing your role in our national approach to reducing emissions.’”

During a Zoom appearance before the Nanaimo Chamber of Commerce on Wednesday, Mr. O’Toole was asked whether the delegates’ vote at the policy convention would complicate efforts to win swing voters who do believe climate change is real.

“Climate change is real, and we’re going to have a real and serious plan to deal with it,” Mr. O’ Toole responded.

Asked by The Globe about reports of dissension in his caucus, Mr. O’Toole sidestepped the issue, saying supporters are worked up over their concerns about the current Liberal government. “It’s a tough time politically,” he said.

Mr. O’Toole and his party will need to outline a strong climate-change plan if they hope to form the next government, said Ken Boessenkool, J.W. McConnell Professor of Practice at the Max Bell School of Public Policy at McGill University.

“He cannot win the upcoming election without a credible climate-change policy – critical swing seats around Toronto and in the Lower Mainland in B.C. are simply not winnable without that,” Mr. Boessenkool said by email, adding that Mr. O’Toole’s opposition to a carbon-pricing plan may cost him votes from Canadians who support such a measure as a “core element of a credible climate-change policy.”

“He is really in between a rock and a hard place – he has got this commitment to do more on the environment than the Trudeau Liberals have done, but doesn’t want to use the system that is the most efficient, transparent and least interventionist from government because it obviously has the word ‘tax,’ in it, [which] sort of has a negative visceral reaction,” Mr. Davidson said in an interview.

Mr. Boessenkool, who held strategic and policy roles in four national election campaigns under former prime minister Stephen Harper, said Mr. O’Toole should alter the Liberal carbon-pricing plan to give provinces more flexibility. The point, he said, would be to “make sure that rural and suburban voters are made better off under an O’Toole carbon price than they are under the Trudeau carbon tax.” 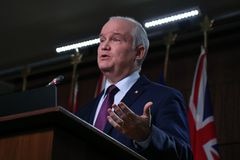