It has been a year since Pierre Legault, Canada’s Senate Ethics Officer, began investigating an all-expenses-paid trip to China by three Conservative senators and their spouses.

The ethics watchdog launched the probe last December after The Globe and Mail reported that Senators Victor Oh, Don Plett and Leo Housakos went on a two-week trip to Beijing and the southeastern Chinese province of Fujian in April, 2017, without disclosing it as either sponsored travel or a gift as required under the rules.

Mr. Legault’s office said inquires under the Ethics and Conflict of Interest Code for Senators are conducted confidentially and that it could not comment on why the investigation has yet to be completed.

The Senate Ethics Officer’s job is a part-time position. The office declined to say how many hours a week Mr. Legault’s job entails, referring questions to the Privy Council Office, which did not immediately answer the query.

Independent Senator André Pratte formally asked for an inquiry, saying it was important for the Red Chamber to demonstrate “high ethical standards.”

In a letter to Mr. Legault on Dec. 1, 2017, Mr. Pratte said the inquiry should be concluded as rapidly as possible to avoid the “institution’s reputation from being further tarnished.”

Senator Peter Harder, the Trudeau government’s representative in the Senate, declined to speak on the investigation, noting that he does not sit on the chamber’s ethics committee, but offered this general comment:

“I do think that timely review of complaints is an important piece of the integrity of our system.”

Mr. Pratte now says he’s comfortable with the fact that the investigation is taking this long “if that is what it takes to do a good job.”

Senator Marilou McPhedran said a year is a substantial amount of time to conduct an investigation but added that she does not know if it’s too long because she has no idea what the Senate Ethics Officer is doing. She said the office should be required to report on the progress of investigations.

Chinese media reported in April, 2017, that the three senators had travelled to China at the invitation of a Beijing-based wealth-management firm that recently opened up an office in Vancouver.

Mr. Housakos gave conflicting accounts of who paid for the trip. At first, he said it was sponsored travel, partly paid for by China and a trade group based in Canada, and that a staffer had forgotten to inform the ethics office as required under Senate rules. He later said “my understanding by and large is [the trip] was covered by two Canadian-Chinese associations,” but he could not remember their names.

Mr. Oh later told The Globe and the Senate Ethics Office that he did not believe the senators had to declare the trip because his family picked up the tab for airline tickets, hotels, meals and transportation.

The Globe reported earlier this month that wealthy Toronto developer Ted Jiancheng Zhou, who has close ties to Beijing’s ruling Communist Party, accompanied the senators on their two-week trip. He has since set up 10 non-profit Chinese-Canadian Conservative associations to help the Conservatives win support in the next election.

The three politicians were introduced to senior Communist Party officials and feted, including at the five-star Regis Hotel in Beijing. Mr. Oh did not respond to questions from The Globe on whether Mr. Zhou, who was on the trip as a member of the Canada-Fujian business delegation, paid any of their expenses.

Mr. Oh declined last year to explain three other trips to China that were not publicly declared to the Senate Ethics Office, but denied that they were paid for by the Chinese government. He is a frequent traveller to China and prominent at banquets and events in Canada where Chinese diplomats and party officials are invited guests.

Editor’s note: An earlier version of this story included an incorrect spelling of Independent Senator André Pratte’s surname. This version has been corrected. 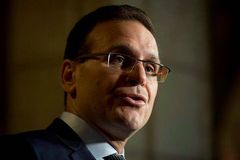