Facebook Canada is joining the federal lobbyist registry after the company’s top Canadian official faced questions from MPs over the fact that he had not registered.

Kevin Chan had told MPs that he did not meet the threshold for registering, even though he meets privately with Liberal cabinet ministers and provided Finance Minister Bill Morneau with tech support on how to use Facebook Live to promote the federal budget.

Mr. Chan, Facebook Canada’s head of public policy and an ex-policy director for former Liberal leader Michael Ignatieff, appeared to take offence last week when MPs asked why he had not registered as a lobbyist.

“This question does go to the heart of the company’s integrity. And, quite frankly, my integrity, personally,” Mr. Chan told MPs on April 19. “At no time has Facebook come close to meeting the threshold for registration as a lobbyist.”

The company stands by that position, but a spokesperson said it will be registering in the interest of greater transparency. The company has also scheduled a meeting with Lobbying Commissioner Nancy Bélanger to discuss the issue further.

Current lobbying rules require corporations to register when the cumulative lobbying activities of all employees adds up to a “significant part of duties,” which has been defined as the equivalent of 20 per cent or more of the working hours of one full-time employee, over a one-month period.

Mr. Chan’s appearance was part of an ongoing review by MPs on the access to information, privacy and ethics committee who are looking into the misuse of Facebook data by Cambridge Analytica, a consulting firm.

Former federal lobbying commissioner Karen Shepherd had recommended that the 20-per-cent threshold be removed because it is confusing and difficult to enforce. The commissioner’s office said last week the commission maintains that position.

The House of Commons committee on access to information, privacy and ethics also called for that section to be removed in a 2012 report focused on a review of federal lobbying laws.

Registered lobbyists are required to file monthly public disclosures outlining their meetings with public office holders such as cabinet ministers, MPs and senators, public servants and staff who work in ministers’ offices.

Facebook spokeswoman Meg Sinclair provided a statement to The Globe Monday with an update to the company’s position.

“Facebook understands the need for greater transparency and, while we do not meet the threshold required for registration, we are committed to being added to the Lobbyist Registry. We will do so as soon as possible,” she said in an e-mail.

Duff Conacher, co-founder of the advocacy group Democracy Watch, said he will be filing a complaint this week with the lobbying commissioner requesting an investigation of Facebook’s activities. Mr. Conacher said the commissioner should examine whether the company was in fact under the 20-per-cent threshold when planning time is considered.

Democracy Watch will also be asking the commissioner to review whether Mr. Chan violated section 10 of the Lobbyists Code of Conduct when he provided technical support for the Finance Minister.

That provision of the code states that in order to avoid the creation of a sense of obligation, a lobbyist shall not provide or promise a gift, favour, or other benefit to a public officer, whom they are lobbying or will lobby, which the public office holder is not allowed to accept. “If someone called Kevin Chan and said ‘Come and show me how to use Facebook Live,’ would he go if anybody called? No. He wouldn’t,” said Mr. Conacher. “He did a favour for Bill Morneau.” 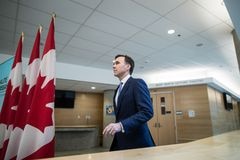