Relatives of the Canadian victims who died in last year’s crash of a Boeing 737 Max airliner made an emotional plea on Tuesday for more scrutiny from Ottawa before the grounded plane is allowed to fly again.

During tearful testimony before the federal Transport Committee, Paul Njoroge and Chris Moore called for a public inquiry into Canada’s endorsement of the flawed 737 Max. They also called for a formal investigation into why the government didn’t ground the plane after its first disaster, which could have saved lives.

“I am here today because I believe that the crash that killed my family was preventable,” said Mr. Njoroge, a father from Brampton, Ont., whose wife, three children and mother-in-law were killed in the second crash. “Aviation regulators across the world were not diligent enough in their dispensing of regulatory authority over the certification and validation of the 737 Max plane.”

Investigators have determined that flawed software designed to stabilize the 737 Max instead forced the plane into a nosedive when given readings from a faulty sensor during the two disasters. The first crash, in late 2018, killed 189 people in Indonesia. The second, in Ethiopia, killed 157 people, including 18 Canadians, and resulted in the plane being grounded.

Regulators around the world are preparing to allow a revamped version of the 737 Max back into service, with Boeing assuring governments the flawed software has been fixed and the plane’s weaknesses corrected. Last week, the U.S. Federal Aviation Administration gave its approval, and on Tuesday, European regulators signalled they would unground the plane as early as January.

Transport Minister Marc Garneau said Canadian officials are examining Boeing’s changes to the aircraft, and that Ottawa will not allow the plane to return to the air until assured of its safety. Transport Canada may require pilots to undergo additional training on cockpit safety measures before the 737 Max can resume flying.

However, Mr. Moore, a Toronto father whose 24-year-old daughter Danielle died in the second crash, said that before Canadians can trust the plane is safe, they deserve more transparency into Transport Canada’s endorsement of the 737 Max, and why it wasn’t grounded after the first crash. To approve the plane, Transport Canada relied on information from the FAA, which had outsourced much of that scrutiny to engineers at Boeing.

“Our government didn’t fully understand what they were validating. Transport Canada was essentially rubber-stamping a doomed plane,” Mr. Moore said.

It was the first time since the hearings began in February that families of the victims were allowed to testify. Mr. Njoroge and Mr. Moore were to appear in March, but the process was shelved due to the COVID-19 pandemic.

Boeing has refused to appear at the hearings, ignoring a request from the Canadian government. Meanwhile, Transport Canada has provided little public clarity on what regulators knew about the flawed plane after the first crash.

The government has acknowledged it was informed by the FAA that the U.S. regulator performed a risk assessment on the 737 Max after the initial disaster, but Transport Canada has never said publicly what information the FAA provided, or why it didn’t demand more data from the U.S. regulator. Crash investigations later showed that the FAA’s risk assessment determined the Max was liable to crash again, which it did in early 2019.

Boeing said it has patched the software problem in the 737 Max, and ensured the stabilization program known as the manoeuvring characteristics augmentation system (MCAS) would no longer rely on a single sensor – a key flaw in the original design.

Although Canada may require additional training to help pilots handle potential MCAS problems in flight, that idea leaves some aviation experts uneasy. Gilles Primeau, an expert in flight control systems who has investigated the 737 Max, said such band-aid measures aren’t enough to assure him the plane is stable.

Mr. Primeau told the committee Boeing has a “reoccurring pattern” of not being forthcoming with governments and investigators about the plane over the past year, including its refusal to testify in Canada. When asked if, given his concerns, he would be uncomfortable flying the revamped 737 Max, Mr. Primeau responded: “Affirmative.”

Rob Giguere, chief executive of the Air Canada Pilots Association, said pilots are concerned about the government’s practice of delegating much of the oversight of a new plane design to the FAA, and called for a more rigorous oversight by regulators in Canada. “We should not solely rely on what may be a flawed regulatory process of another jurisdiction,” Mr. Giguere said.

Both he and Tim Perry, the Canadian president of the Airline Pilots Association International, stressed the need for pilot training and to involve pilots in the conversations about new aircraft, and in the return of the 737 Max to service. Mr. Perry, who represents WestJet pilots, told the committee he wanted to emphasize “the need to involve current line pilots more formally in Transport Canada’s work.”

The hearings were mostly sombre, with Mr. Njoroge and Mr. Moore struggling to contain their emotions at times.

As he asked for a public inquiry to shed more light on Transport Canada’s decisions surrounding the 737 Max, Mr. Njoroge struggled to find words when discussing his lost family members.

“I spoke about my life being thrown into a chasm of hopelessness,” Mr. Njoroge said, before falling silent for more than 20 seconds as he tried to hold back tears.

“The difficult thing in life is when you live in a world full of millions of people, but you just feel alone all the time,” Mr. Njoroge said. 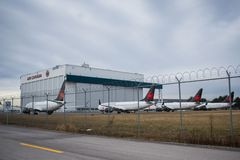 Families of Canadian victims will get to testify at Boeing 737 Max hearings
February 12, 2020 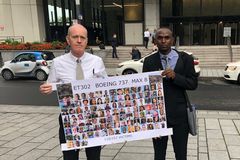