The long-standing trend of farmers struggling to find workers is expected to get worse, a Senate committee has found.

The Senate committee on agriculture and forestry released a report Monday which found that Canada needs to be more competitive in global markets. A lack of workers in the agricultural sector is one of many factors contributing to missed opportunities, said Senator Diane Griffin, the independent chair of the committee.

Ms. Griffin said Canadians have become more urbanized and aren’t interested in jobs in the agriculture sector. She added that many Canadians don’t want seasonal work and aren’t aware how well-paying these jobs, both temporary and permanent, can be. Vacancies in the sector, she said, are forecast to increase from 69,000 to 114,000 by 2025.

“The declining labour market that they’ve told us about for years has finally come to pass,” Ms. Griffin said.

Ryan Koeslag, the chief executive officer of the Canadian Mushroom Growers Association, which represents about 30 growers that supply mushrooms to grocery stores, said the sector is running at a 20 per cent vacancy rate. Mr. Koeslag said the growers throw away about $51-million worth of mushrooms a year because they don’t have workers to pick them.

“Definitely there has been missed opportunities,” he said.

To increase workers in the sector, the committee recommended the government review the Temporary Foreign Worker Program to make the process faster for repeat participants and to ensure application costs aren’t burdensome for farmers.

The program has long been a source of controversy as the federal government aims to balance the labour concerns of Canada’s agriculture sector with the need to protect migrant workers from exploitation. The program’s rules have been frequently updated. Earlier this month, Ottawa announced a new pilot program aimed at providing migrant workers with a path to permanent residency, which industry praised, but migrant advocates said was too limited and should be expanded to the entire program.

James Watson, a media-relations officer for Agriculture and Agri-Food Canada, said AAFC is reviewing the recommendations in the Senate report. While a government response has not been requested at this time, Mr. Watson said AAFC will work with other federal organizations to respond to recommendations should one be requested in the future.

Mushroom growers were happy to see the pilot project, which will encourage migrant workers in the greenhouse, mushrooms, livestock and meat-processing sectors, Mr. Koeslag said.

He said Canada’s mushroom growers create about 4,000 jobs, 73 per cent of which are filled by Canadians. He said every one temporary foreign worker supports four Canadian workers and without the foreign worker, growers could run into a situation where the picking is not efficient.

Mr. Koeslag said the sector is growing at 6 per cent a year for white and brown mushrooms, and 23 per cent for specialty mushrooms. He said growers see the most potential to export products to the United States.

“Certainly, if we find more people to work in our industry we see that expanding further,” he said.

Ms. Griffin, who is a senator for Prince Edward Island, said farmers can export products internationally because of trade agreements like the Trans-Pacific Partnership and the North American free-trade agreement. But, she said, farmers face traffic delays, hefty user fees at the Confederation Bridge that connects her province to the mainland, and costly inspections and certificate fees when moving products across provincial borders.

“It’s almost more difficult sometimes to ship things between provinces than it is to ship them out of the country,” she said.

Of the products being exported, she said 50 per cent are being sent out in a non-processed form to another country, which she said is a missed opportunity for economic growth. 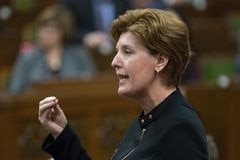 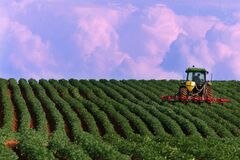 Farm-worker-program recruits from Guatemala stranded in Canada without jobs
May 31, 2019 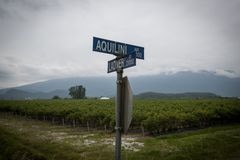