A year into his term, Mr. Ford demoted his finance minister, Vic Fedeli, two months after he delivered the government’s first budget in April. The budget contained targeted cuts to municipalities and other services that, since the details came to light, have dogged Ontario’s Progressive Conservatives.

The changes expand the cabinet table to 28 seats from 21, and make room for several newcomers. They follow complaints in PC circles that the government has had trouble communicating its message, as some recent polls suggest that under Mr. Ford, the party has suffered as much as a 10-per-cent decline in support from the 40.5 per cent it won in last June’s election.

Opinion: Why Doug Ford’s cabinet shuffle could put more pressure on the Premier himself

Doug Ford Year One: A recap of Ontario’s tumultuous 12 months

Ontario, the country’s most populous province, home of its financial hub and generator of nearly 40 per cent of Canada’s gross domestic product, will be a key battleground for this fall’s federal election. Senior Liberals see Mr. Ford’s performance as a potential liability for Conservative Leader Andrew Scheer, and routinely link them in public statements. Senior Conservative MPs say they have heard concerns about the Premier from voters.

Lisa MacLeod, who clashed with the parents of autistic children over the government’s changes to funding for treatment, was moved from Children and Social Services to Tourism, Culture and Sport. Lisa Thompson, who, as education minister, faced off against school boards over plans to increase class sizes – saying it would make students more resilient – moves to Government and Consumer Services.

Only eight of Mr. Ford’s ministers kept their jobs in the changes, which come just days after the Premier was booed at an event to celebrate the Toronto Raptors’ NBA championship win. In May, he was booed at the opening of the Special Olympics in Toronto.

After Lieutenant-Governor Elizabeth Dowdeswell swore in the new cabinet, Mr. Ford provided few details on the reasons for the moves. He acknowledged his government has had problems with communication, but said he wanted media coverage to be more “fair and balanced.”

The decision to demote Mr. Fedeli, the former mayor of North Bay, Ont., stunned some senior Conservatives, who view him as a steady hand. Mr. Fedeli was the party’s interim leader in early 2018, after Patrick Brown resigned.

A source close to Mr. Ford’s inner circle who was granted anonymity because they are not authorized to speak publicly said the Premier believed the budget rollout could have been smoother, and that the spending cuts should have been spelled out clearly from the beginning.

Replacing Mr. Fedeli as Finance Minister is Rod Phillips, who as environment minister shepherded the government’s greenhouse gas emissions plan and its easing of protections for endangered species, both criticized by environmentalists. Mr. Phillips, 54, formerly chairman of the Postmedia newspaper chain and president and chief executive officer of the Ontario Lottery and Gaming Corp., has been around PC Party politics for decades, serving as chief of staff to Toronto mayor Mel Lastman in the late 1990s.

Caroline Mulroney, who as attorney-general faced protests over budget cuts to Legal Aid Ontario, moves to Transportation, and the current minister, Jeff Yurek, replaces Mr. Phillips at Environment. Taking over from Ms. Mulroney as Attorney-General is Doug Downey, 49, the rookie MPP for Barrie-Springwater-Oro-Medonte and a lawyer and former city councillor in Orillia, Ont.

Etobicoke-Centre MPP Kinga Surma, who was a councillor’s aide at Toronto city hall, has been named an associate minister of transportation for the Greater Toronto Area.

Ms. Mulroney, a lawyer and daughter of former prime minister Brian Mulroney, ran for the PC Party leadership last year. Transportation is a key portfolio for Mr. Ford, and Ms. Mulroney and Ms. Surma will oversee the takeover of Toronto’s subway system and be in charge of making plans for new subway lines a reality.

When asked why he had moved Ms. MacLeod to a less important portfolio, Mr. Ford pointed out that running the tourism ministry puts her in charge of the government’s effort to attract a private-sector partner to redevelop Ontario Place, the defunct amusement park on Toronto’s waterfront. The autism file goes to Todd Smith, who was economic development minister.

And just as the government gears up for renewed battles with unions representing teachers, whose contracts expire at the end of August, 32-year-old Toronto-area MPP Stephen Lecce (King-Vaughan), a newcomer to cabinet, takes over as Education Minister.

Another former leadership rival, Health Minister Christine Elliott, stays in her current role, and remains deputy premier. But her responsibility for long-term care has been given to Merrilee Fullerton, the former minister of training, colleges and universities.

Opposition NDP Leader Andrea Horwath said Mr. Ford was trying to shift blame for his policies: “Doug Ford is throwing his cabinet under the bus for his cuts. ... I am sure that some now-demoted ministers tried to stand up to Mr. Ford. And look what happened to them.”

Interim Liberal Leader John Fraser said the changes show the government is rankled by the criticism and is in disarray: “It’s panic. The Premier is panicking.” 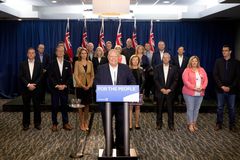 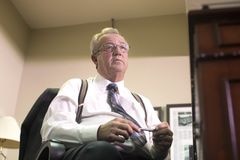